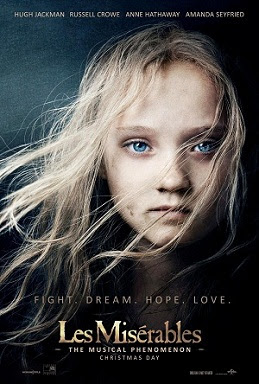 “To love another person is to see the face of God.”
Jean Valjean in Les Misérables

I really didn’t know that much about the storyline for Les Misérables before watching the movie. I had seen the trailer and I was impressed with the number of famous actors and their singing abilities. I waited for the movie to come out on DVD before watching it though because I wasn’t sure I would like the storyline.

Les Misérables is based on a French historical novel by Victor Hugo (also the author of The Hunchback of Notre-Dame). The story is set in France and begins in 1815 (over a decade after the end of the French Revolution) when Jean Valjean is released for parole from prison by Javert, a prison guard. Valjean cannot find food or shelter because his papers say he is a dangerous parolee. Luckily, a bishop helps Valjean. This act of kindness leads Valjean to start a new life with a new identity. Javert begins to hunt Valjean for breaking his parole.

Eight years later, Valjean is the major of Montreuil-sur-Mer and a factory owner. The workers of Valjean discover that a fellow worker, Fantine, has an illegitimate child, Cosette. The workers demand that Fantine be dismissed and although Valjean is sympathetic, he is distracted when he spots Jarvert. He leaves the decision to his foreman who dismisses Fantine. Knowing that her daughter’s life depends on the money she sends, Fantine sells her hair, her teeth and her body for money. When she fends off an abusive customer, Fantine is arrested by Jarvert. Valjean defends Fantine and takes her to the hospital after learning his role in her misfortune. He vows to take care of her daughter Cosette as penance. He buys Cosette from the Thénardiers, the inn keepers who were “looking after” Cosette, and they flee to Paris, as Valjean has had to confess he was the prisoner that Javert was looking for in order to save another man from mistaken identity.

Nine years later, a revolutionary student named Marius sees Cosette and they fall in love at first sight. Eponine, Marius’ friend and daughter of the Thénardiers, takes Marius to Cosette. Marius and Cosette profess their love for each other. Unfortunately, the Thénardiers break into the house where Valjean and Cosette are living, planning to ransom Valjean to Jarvert. Jarvert and Cosette manage to escape. Marius manages to deliver a letter to Cosette saying his final goodbye before some fellow students attempt to incite the Parisians to revolt. Valjean intercepts the letter and joins the revolt to protect Marius. Once there, Valjean finds that Jarvert has been captured. At the first opportunity, Valjean frees Jarvert, pretending to execute him. Will the revolutionaries win the battle? Will Valjean manage to protect Marius to ensure his daughter’s future happiness? How will Jarvert react to being set free without consequence by the very man he has spent his life hunting?

You can see the trailer below:

I’m rather ambivalent about this movie to be honest. I found the story to be very sad throughout, with no respite. I guess that the tone of the movie should be obvious from the title of the movie, Les Misérables, but I wasn’t quite expecting the extent of the misfortunes. The story covers extreme poverty, abuse, murder, and suicide. Only Cosette and Marius love for each other offered a lighter tone to the movie; although this to does not come without a cost. The ending of the movie is certainly bittersweet rather than happy. I found the constant tragic occurrences to be rather overwhelming at times. I’m not sure that I would watch the movie again as a result, unless I was really in the mood for something sad.

I was amazed by the caliber of the actors in the movie. For example, the all-star cast includes Hugh Jackman as Jean Valjean, Russell Crowe as Jarvert, Anne Hathaway as Fantine, Amanda Seyfried as Cosette, Sacha Baron Cohen and Helena Bonham Carter as the Thénardiers and Eddie Redmayne as Marius. I was impressed with the acting skills throughout the movie, particularly Hugh Jackman. I’ve only seen Hugh Jackman in movies where he is a tough-guy (e.g., The Wolverine), so it was interesting to see a softer, more vulnerable side to him.

I was also impressed with most of the actors’ singing. I was a tad worried that the movie was almost entirely singing; there are very few words just spoken and instead they are sung. I actually didn’t mind the constant singing because the pace changed between soft songs and fast songs, and singing songs versus singing dialogue. I was really impressed with Hugh Jackman I thought he did an excellent job of telling the story through the songs that he sang, especially conveying the emotion of each song. I didn’t enjoy the speaking parts of Hugh Jackman’s songs as much though. His deep voice made some of the lines hard to hear. Although Russell Crowe’s acting was fairly stiff in comparison and his range was much more limited in comparison to the other actors, I really liked his distinctive voice. I could tell when Crowe was singing without looking at the screen, and not in a bad way. I’m not sure that he was necessarily right for a movie that required such a strong singing voice, but I enjoyed his gravelly tone, nevertheless. Anne Hathaway stole the entire movie for me though. Her singing was amazing and gave me chills at points. I felt that she acted and sang her part with such conviction. When I think of Les Misérables, Fantine is the character that I think of.

I was less impressed with Amanda Seyfried and Eddie Redmayne’s singing. They stood out for all the wrong reasons, including a few dud notes. I actually cringed during a few of their songs, particularly when they hit the really high notes. I also wasn’t blown away by Sacha Baron Cohen and Helena Bonham Carter. I usually love Helena Bonham Carter and I just didn’t enjoy her singing parts. I guess that the Thénardiers are meant to provide some light relief to such a depressing movie, but I didn’t enjoy those scenes at all. If I watched the movie again, I would definitely fast forward through them. I think that when a story is told via singing, it’s really important to have actors who can sing really well. I think that this did detract from the movie somewhat because I did not enjoy those scenes as much.

I did notice that some of the songs were rather similar to each other. For example, the melody from the Dreamed a Dream song kept cropping up. This was fine the first few times, but I became a little bored towards the end. I know this is common during musicals and I usually enjoy this, but I felt it was overdone in Les Misérables.

Final Verdict: While a dark story, with many awful things, it is still a good musical movie.

For the Les Misérables sound track, see the YouTube video below: