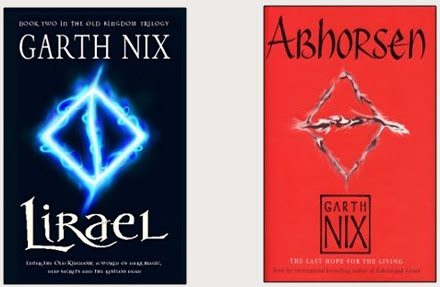 “The Ninth was strong
and fought with might,
But lone Orannis
was put out of the light,
Broken in two
and buried under hill,
Forever to lie there,
wishing us ill.”
Abhorsen, Garth Nix

Lireal and Abhorsen are the second and third books in Garth Nix’s The Old Kingdom Trilogy. I am reviewing these two books together because essentially one really large book. While you can read Sabriel (the first book in the trilogy) as a stand-alone book because it resolves the conflicts and issues that occur. The story arch begins in Lireal and ends in Abhorsen. In fact, the ending is fairly abrupt in Lireal, and the story picks up Abhorsen exactly where it ended. It’s almost like turning the page and beginning a new chapter, rather than starting a new book. It is my understanding that these two books were originally meant to be one book.

Lireal is set many years after the ending of Sabriel. In the gap of time between the two books, Sabriel and Touchstone have married and now rule the Old Kingdom as King and Queen. They also have two children, Sameth and Ellimere. They have fought tirelessly over the years to return the Dead to death, and things were slowly beginning to return to the former, glory days. Sabriel and Touchstone are no longer the main protagonists in Lireal and Abhorsen. Instead, the book focuses on Lireal, a daughter of the Clayr (a race of people known for their ability to see the future) and Prince Sameth.

The book begins by taking the perspective of Lireal. Although Lireal is a daughter of the Clayr, she doesn’t have the Sight yet. She waits year after year for one of the Clayr to announce that they have Seen her receive the Sight, but by the age of 14, she fears it will never come. As the oldest member of the Clayr without the Sight, Lireal becomes an outsider and lives a quiet life on her own. By chance, or destiny, Lireal manages to get herself a position as a Librarian; a position that often puts her in danger for the Clayr’s library does not house books alone. With the help of the Disreputable Dog, Lireal explores the library and gets into all sorts of trouble. The chapters where the reader goes on the adventures with Lireal are some of the most interesting and exciting parts of this book. I actually wish there had been more adventures in the library and less cut aways to different characters. I am ever hopeful that Garth Nix might write a book of short stories about these adventures.

One of the main characters that the book cuts away to is Prince Sameth. I found these chapters hard going. The first few chapters based on Prince Sameth are interesting. He fights the Dead, enters Death and faces a Necromancer. The problem is that entering Death changes him. In the weeks or months that follow (I lost track as I mindlessly read the rest of the chapters on Prince Sameth), Prince Sameth becomes withdrawn and keeps to himself. The majority of the chapters are based on his inability to read The Book of the Dead because of what happened to him, and his whinges and whines about his sister and the lack of presence of his parents. It’s not that I don’t understand that Prince Sameth went through a lot by entering Death and facing a Necromancer, and that that changed him. I think it’s just a little over done, in my eyes. I think a few less chapters on Prince Sameth and a few more on Lireal would have worked better.

Once or twice I considered giving up, but I was still interested in Lireal, especially when the Clayr finally See her. Mind you, she is at the heart of the battle between good and evil. Lireal is ushered out of the Clayr and set on a path that will lead the vision to come true. On her travels with the Disreputable Dog she finds Prince Sameth and Mogget (a cat who’s more than he seems, a character from Sabriel). This is where the book turns for the better and my interest returned. Together they make their way to the Abhorsen’s house (the Abhorsen is a necromancer who has a spelled sword and seven bells used to control the Dead, for those of you who have not read Sabriel) where they find a temporary shelter from the Dead who cannot cross the river that circles the house. Lireal ends with hundreds of Dead surrounding the house.

Abhorsen, as aforementioned, picks up exactly where the story was left in Lireal. Lireal, Prince Sameth, the Disreputable Dog and Mogget manage to escape the house via an even more dangerous route than facing the hundreds of Dead that surrounded the house. They finally managed to track down the Necromancer and find that he is unleashing a much greater source of evil, known as Orannis or The Destroyer, from his subterranean prison. And, so the fight to keep Orannis bound within the two silver hemispheres begins. For Orannis will be the end of all Life. The task falls onto the shoulders of Lireal, who has changed beyond recognition since the beginning of Lireal. She embraces her task as best she can and faces the fight head on in Life and Death. The only question is, will she be able to do it before it’s too late and the horror of Orannis is unleashed on the World? I don’t have many comments on the final book in the trilogy. It was excellent and had me reading non-stop for a day or so until I had finished. It had just the right amount of danger, sorrow, joy and love, and the ending felt right, however bittersweet.

In all, these two books deal with a number of key issues that many people will relate too. You have two young people, Lireal and Prince Sameth, who are uncomfortable in their own skin. Lireal has been raised as a daughter of the Clayr, yet she does not have the Sight. As a result, she struggles with who she is, even contemplating suicide at some points because she does not fit in. Prince Sameth is the Abhorsen-in-waiting, but after leaving a piece of himself in Death, he is unable to bring himself to become what he is destined to be. Through the help of the Disreputable Dog, Lireal finds her destiny, and helps Prince Sameth find his. When Lireal discovers she is actually the Abhorsen-in-waiting and Prince Sameth discovers he is a Wallmaker, everything changes. Their beliefs about who they are change, and the doubts they experience and they struggle they experience as they true to adopt their new identities is very true to life. In the end, embracing their new destiny’s suits them better and shows that it’s okay to grow into who you are.

Another key issue is destiny and free will. The most famous quote from the series being, “Does the walker choose the path, or the path choose the walker.” Throughout the book there are people (Dead and alive) who try to escape their fate. The Dead feast on the living so as to avoid death, and the living cling to who they’ve been raised to be. It’s only when Lireal and Prince Sameth embrace their destiny, Lireal as the Abhorsen-in-waiting and not as a daughter of the Clayr, and Prince Sameth faces his fears and fights the Dead, that this turn in their favour.

Final Verdict: These books are well worth the read, just make sure to push through the chapters that focus on Prince Sameth. You’ll be rewarded if you do.

For the first book in the series see Sabriel