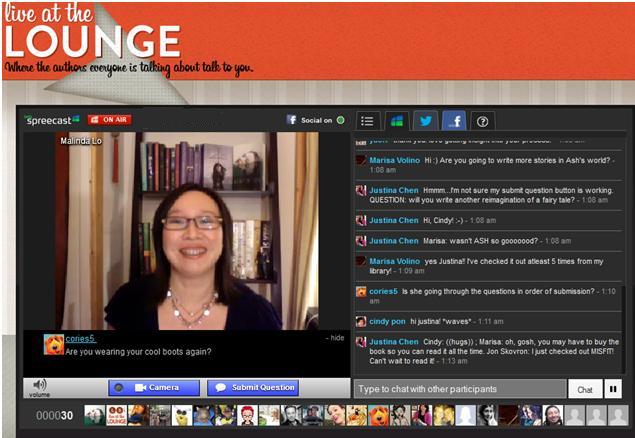 Malinda Lo posted a message to her fans on her Facebook and twitter, saying that we should check out an announcement in her newsletter. When the newsletter arrived, and I read the news, I was surprised at how novel and yet old fashioned the idea was. It was a question and answer session with her fans, but instead of being in a bookstore, where people would have to figure out how to get there, deal with transport and some people would not be able to make it, she had it hosted live on the web. Lo left the tantalizing clue that she may give away some information about the Adaptation sequel, but only if someone asked about it.

The chat itself was hosted by Spreecast, and I think was organized by her publishing company. It seemed that you had to sign up, mostly by linking to twitter or Facebook. I am personally not a fan of these, since those are personal sites that I don’t always like having linked to other sites. However, once you registered, they sent a reminder e-mail an hour ahead of time (otherwise I would have just gone to sleep and missed it). While at a sensible time for the fans in the USA, it was at 1am for me in England. There was a smaller turnout than I expected, with about 30 people throughout the session. I actually liked it as it felt more intimate (which is strange with an internet based thing).

Lo started things off by welcoming everyone and just reiterating that there was an option for submitting questions, but also a camera based question part (which they really tried to get people to do, but only one girl was brave enough). There was also a chat going on right next to her live feed. I am not sure if she was able to see the chat. But I enjoyed following the chat at the same time, as it is one of the few times I have been around fans of Lo’s that were not my friends. It was also nice because some of the people on there were Lo’s friends, and other authors.

Some of the first questions focused on rather mundane things. We covered that Lo was not wearing her super cool boots. She also admitted that she was only being professional from the waist up, and she was actually in pajama bottoms! It was nice to be reminded that authors are real people as well, which is one of the things that really struck me with watching the whole interview.

Obviously one of the most prominent question topics had to do with Adaptation. From one of the questions we found out that it was based off a dream she had (and in the dream Bill Clinton was still president). Her friend Cindy Pon asked what the hardest part of writing Adaptation had been, and the answer surprised me, but it was the characterization. The book is very character driven and not all the characters came easily to here. David was particularly difficult, where as Reece’s mother and Amber were very clear, but the book could not be set from either of their points of view.

Going into this interview, I knew that Lo is a fan of the X-Files, but it was not until someone asked about it that I realized just how much. For me there was a feel to Adaptation that reminded me of the X-Files. But Lo actually did some of the graduate school research on the series. For her research she was able to visit the set and meet some of the producers.

When asked about revisiting the world of Ash she admitted that she currently has no plans to do so, but cannot say that she won’t. She will, however, be writing a new retelling of a fairytale for a collection of some sort. So that may be similar enough. Maybe if we keep hoping she will revisit that world.

She was also asked a question about possible audiobook versions of her books. Lo said that there are not currently any plans. And if she was able to pick who to read it she would prefer a female voice actor. But she mentioned enjoying Jesse Eisenberg read Holly Black’s Curse Worker trilogy. She also confessed that she did some drama in school and would love to read her own books, but that she might not be good enough.

Then we got to the question about the sequel to Adaptation. While Lo was not able to say much, it was just enough to peak our interests. The book has just gone to copy editing (the last stage of work she does) and the cover is currently being worked on. It will pick up within 2 minutes after the end of the first book. There will be more of everyone, and some people will suffer and go through a lot of trauma. So it sounds promising, but nothing too unexpected.

She ended the question and answer session about 30 minutes after the session started (I felt it was a bit short, but then I had just assumed it would be for an hour). We ended with the book trailer for Adaptation. Overall, it was a great new way to connect with fans, especially those that are unable to attend the bookstore based sessions. It also allowed the fans to talk to one another, which was nice (and if I had not been so tired I might have done more). Lo seemed upbeat and interesting, and smiled a lot. It was a very comfortable atmosphere. I have to say, I enjoyed it, and I admit that I loved having her answer a question I sent in! Plus, then I tweeted about it afterwards, and got a thank you from Lo as well. In this digital age, it is nice to have authors embracing the technology and reaching out to their fans, especially when they always seem so appreciative of the fans they have (which makes me more of a fan!).

If you missed it and would like to watch, the live chat was recorded and the video is available here.

Final Verdict: All authors should do things like this. Break out the caffeine if needed to be able to stay up and chat with your favorite author. And if it is Malinda Lo, make sure tune in!