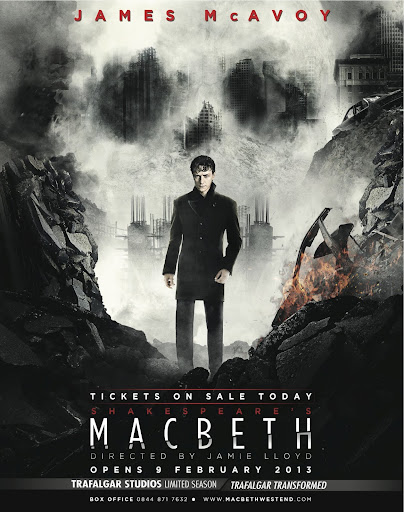 “Methought I heard a voice cry “Sleep no more!
Macbeth does murder sleep,” the innocent sleep,
Sleep that knits up the ravell’d sleave of care,
The death of each day’s life, sore labour’s bath,
Balm of hurt minds, great nature’s second course,
Chief nourisher in life’s feast…”
Macbeth in Macbeth by William Shakespeare

So many months ago, Frances and I realized that James McAvoy was going to be performing in the title role of Macbeth. We only paused long enough to make sure that we were both going to be in town before we booked the tickets. It was a really good thing that we acted fast as all the shows are now sold out! This is one of the few Shakespeare works that Frances likes, so we were both super excited to see this show. And Macbeth is one of my favorites, and I needed one of these after seeing Hamlet by the RSC.

For those of you who are unfamiliar with the plot, here is what happens in Macbeth (as usual for a Shakespeare play we will give the whole plot; there are no spoilers for a 400+ year old story!). After a remarkable triumph in battle, Macbeth is returning home with his friend Banquo when they stumble upon three witches. The witches greet Macbeth as Thane (think Lord) of Glamis (which he is already), Cawdor and “King hereafter.” Banquo asks for a prediction and they inform him that he will not be King but will father a line of Kings. Just after this, a messenger from the King comes and greets Macbeth as Thane of Glamis and Cawdor (Macbeth has just received the title since the last one was a traitor). Macbeth then realizes that he can become King, and sends a letter telling of the events to his wife. At the same time, Duncan (the King) decides to further honor Macbeth and visit his home. Lady Macbeth and Macbeth decide that they will kill the King and make the prophecy come true. As the King sleeps, Macbeth kills the King, and then Lady Macbeth uses the bloody daggers to frame the King’s attendants (the ones she slipped a sleeping potion to earlier). The alarm goes up that the King has been killed, and Macbeth, seemingly in anger, slays the attendants. The two Princes flee as they fear for their safely. Unfortunately everyone else interprets this as guilt, and thus they name Macbeth the next King. As King, Macbeth now fears the rest of the witches’ words (that Banquo, not Macbeth, will father a line of Kings). He orders the murder of Banquo and his son, however the son escapes. Things get really bad under Macbeth’s rule, and some of the other Thanes seek help from England and one of the Princes to challenge Macbeth. Macbeth visits the witches once more, and thinks based on their words that he is invincible; Macbeth learns that he will only be slain when a wood comes and by a man who was not born of a woman. However, in the final fight, the things that foretold his death happen, and a man not born of a woman (but by a c-section) slays Macbeth in vengeance for Macbeth slaughtering his whole family.

The performance starts off with a bang and flashing lights, provided a very gritty and dark Macbeth. It was a very intimate setting, with a handful of the audience sitting behind the actors, at the back of the stage. We were in the second row, and the front row was on the stage level. There were several times where we could have reached out and touched McAvoy or the other actors.

I went in a bit unsure of McAvoy as Macbeth, since he seemed a bit smaller than I pictured, but I knew he had the correct accent. I will admit that his Macbeth was a force to be reckoned with. From his very first scene, where he slides in on his knees, brandishing his weapons (a hatchet and an extra wicked looking machete), he captivated the audience. He was truly fearsome in some of the scenes, and extremely crazy in others. He threw his body around the stage when seeing the illusions and during battle, and really became a roughened war hero. But he wasn’t without faults. The minor point was that I felt he missed some of the more brooding moments as Macbeth. McAvoy had too much energy throughout. The bigger issue was his spitting. At first it as just part of his character—a man in a battlefield—but then he was spitting in every scene. Some of it was just little bits as he shouted and ranted, but there were other scenes where there were long strands clinging to his face, progressively reaching closer to the ground. Then, in a later scene, he was just regurgitating water and spitting it around stage. I am pretty sure that by the end of the play there was not a part of the stage that he had not spit on! In fact, I also think that there was not another co-actor that he had not spat on.

The acting was well done overall. Aside from Macbeth, my other favorite character was Macduff. The scene where he learns of the slaughter of his whole family was moving (even if Frances thought it was a bit long). But there were a couple actors that bothered me, mostly Lady Macbeth and Malcom. Lady Macbeth was great in her madness scene, but most of her other scenes were very shouty (yes I am going to be like the Bard and make up words), with a hunched posture. Like Macbeth, she was good at putting intensity into her acting, but she too lacked the quieter, more panicked, moments of Lady Macbeth’s character. Plus, she tended to overact so that it felt like an actress playing Lady Macbeth. With the other characters, it did not seem like acting. The Prince Malcom was just awkward, and came across more as a socially inept person than someone to trust your rebellion to. The scene where Macduff tries to persuade Malcom to join the rebellion was lacking. Macduff did a good job, but Malcom didn’t seem to bounce off Macduff very well and he brought the tension down. As a result, that scene dragged on.

The stage was amazing. It was very industrial and dilapidated. There were grates in the floor and several unobtrusive trap doors. There were more ladders than I can count, and at least four different doors on the sides, as well as at least two more places of entrance. There were metal chairs and a couple of metal cabinets that provided almost all the staging. There was also a single toilet that made several appearances. But the cast was able to create very distinct settings, but were also unafraid of abusing the furniture. At one point, Macduff launched a chair across the room when battling with Macbeth (the fight was actually pretty good, and had excellent choreography). It made the play more realistic, although I do wonder whether Macbeth always meant to knock the chairs and cabinets around or if he sometimes accidentally walked into them and knocked them around to hide it. Aside from battering the props on stage, there was also real drinks and food. Usually, actors pretend there is food, but not in this play. Here are a few instances: Near to the beginning, the soldiers open cans of beer to celebrate their victory and Macbeth’s promotion. This was real beer, and it smelt really strong. The porter drinks from a large bottle, gargles and spits it at another actor. When Lady Macbeth holds a meal to make a good impression on Macbeth’s friends, Macbeth climbs onto the table, knocking all of he drinks and food (beans) onto the other actor and the floor. There was also a LOT of blood throughout! This came down from the ceiling (like rain) and Banquo’s ghosts spit blood. We felt sorry for the clean-up staff! But the most impressive prop of them all had to be Macbeth’s head at the end. It was an extremely realistic looking hear, it even had a bit of spine and ragged skin where it had been cut off, and it bleed at the when it was first presented!

The general presentation was brilliant, and cohesive. It really felt as if we had slipped into a war torn land, where dirty and bloody clothes were the norm. Scenes were changed with the crash of either lightening or falling artillery, and the sound shook the whole audience. You never knew where or how people were going to enter the stage. Sometimes they would run in from the back while the lights were flashing and appear on stage. Other times they would appear out of one of the many entrances onto the stage (climbing up ladders and down ladders), entering via doors on the stage and off. Finally, other times, they would open trap doors and haul themselves onto the stage. It was very well done for such a small stage.

The witches were an interesting design. The three women were in military cargo trousers and usually leather aprons. Their faces were obscured by modified gas masks, and usually they were covered in blood and wielding sharp weapons of torture. Because of the masks, it was sometimes hard to understand them. One of their scenes was also missing (where they meet with Hecate), and another completely altered. The scene where Macbeth talks a second time with them was very different, and I can’t say I really liked the changes as I had been looking forward to the scene. There were no ghosts. Instead, Macbeth appeared to become possessed and speak the lines (this is the regurgitating scene). Then the line of Banquo’s heirs at the end of the scene was comprised of more cast members dressed like the witches. It was not a line of Kings but a larger collection of witches (which you would not have realized what they were supposed to be unless you knew the plot). Frances hadn’t remembered this scene though, and she thought that the regurgitating scene was fascinating. Essentially, the witches gave Macbeth a potion to drink. With each mouth full and subsequent regurgitation, Macbeth made a new prophecy about his death. McAcoy acted this really well! It really sounded like the potion was drawing out a prophecy that he couldn’t control. Towards the end it did become a little awkward. Macbeth is desperate for more information, so he drinks the rest of the potion and when he doesn’t regurgitate or voice a new prophecy, the sticks his fingers down his throat to try to bring the prophecy on.

Having said all of this, and I know some of it sounds harsh, I loved the play. It was unsettling to watch, but the tragedies should be. McAvoy was a truly remarkable Macbeth, and a great actor who knew how to draw the eyes to him.

Quick PSA for other theatre patrons: it is generally annoying to others around you when you and your friend whisper constantly during a performance. Also it is unacceptable to sit with your feet up on the back of the person in front of you’s chair (even if your shoes are off)…this is especially unpleasant to those around you when your feet smell.

Final Verdict: If you ever have the chance to see this staging or another James McAvoy play, get tickets immediately. You just may want to bring a waterproof jacket to wear!