A Frances and Lynne Adventure
Waterstones in Bath
25 August 2012

“The visions are fragmented and a dark cloud spreads like spilt ink across the pages of possible futures.”
Lirael, Garth Nix

Some times when you come up with a plan, you don’t realize the full extent of what is going to be involved. And sometimes you put your life in someone else hands and if you both survive, you will have reached a new level to your friendship. This was our trip. When Lynne said she had gotten a ticket to see Garth Nix in Bath, it sounded so simple, and then Frances suggested driving instead of taking a train. We faced a trial by fire, and came up on top!

After spending about three hours on the road, and surviving getting lost, poor directions, detours and a tractor immediately followed by a driver in training, which forced us to drive at less than 10 miles an hour up scary sized hills, we made it to Bath! We had planned to visit the Jane Austen museum while we were in Bath, but we didn’t make it in time. We will save that Frances and Lynne Adventure for another time, preferably when Frances is better at driving!

After dinner at a local pub, we bought a chai and headed over to Waterstone’s. Frances was already armed with a copy of The Old Kingdom trilogy (a humongous version with all three books in one!), and Lynne purchased a copy of Sabriel from the store (as her much loved copy was out of the country at the time!). We made our way upstairs and sat down in the second row. Ah! The suspense was killing us. (As a short side note, it was interesting to see the audience that was there to see him. There were families with young boys there because of his newer books, and then teenage to early 30s women for The Old Kingdom Trilogy fans!)

When Nix arrived, Frances instantly liked him. Lynne was a little unsure at first, but soon warmed to him. Nix began by telling us about his name. He laughed about how other authors say he has the perfect name and it sounds like a pen name, rather than a real name. Nix said that Garth Nix is his real name. He went on to talk about the meaning of his name (both Garth and Nix are words in a dictionary), and how Nix means “water sprite” and has then received e-mails addressed to The Water Nymph when he mentioned this to people.

Afterwards, Nix went on to talk about all the books he has published. He had a folded set of book covers which he held up (the US covers). He started talking about his first book, which didn’t do that well. He encouraged people not to give up because he didn’t and now he’s a very successful author who has published numerous books. He went on to unfold the card board book covers and they stretched across most of the room we were in.

Next, Nix talked about his new book, The Trouble Twisters: The Monster, which he co-wrote with Sean Williams. He read a section from the book and talked about the plot for those of us who were unfamiliar. This book is written for children, and although it sounds interesting, I think it is definitely too young for us. If you are between the ages of 9-15 years old, you will probably love this book though!

Nix then turned to his other new book, A Confusion of Princes. He read another section from the book. Frances wasn’t a fan of this book actually. It’s more sci-fi than fantasy, and she’s not keen on sci-fi books, mainly because she doesn’t follow a lot of the jargon that’s used. She found that happened with the excerpt Nix read to us.

Nix then went on a slight tangent about a supposedly magic ring that brings people 10 years of good luck. He had found it in a ruined building while traveling. That day was supposedly the 10 year anniversary and he needed to give it away. He then gave a ring to one of the other attendees, and then revealed that it was a made up story. While it was well told, we are still not really sure of the point, besides the power of storytelling. After talking about his new books, he began talking about Clariel. This will be the fourth book in The Old Kingdom Trilogy (following Sabriel, Lireal and Abhorsen, and the short story Across the Wall). Clariel is essentially a prequel to Sabriel, and occurs several many years before, and follows an earlier Abhorsen. Nix has written the prologue to Clariel and had it on his phone. He read the prologue to us, although but warned that it might not even make it into the final version of the book. We sat on the edge of our seats as he read this prologue, and we cannot wait for this book to be released, which he said will be in 2013 sometime. As far as we are concerned, it cannot come soon enough.

Nix then turned to the audience for questions. He stopped just before taking any questions though, and pulled out an Abhorsen bell — ha ha not a real one! – one that attaches to a bracelet. These have been sold out for a long time [see website: http://www.bellcharms.com], so everyone was eager to win the prize. Nix decided to let chance take its course and asked two people to give him numbers. He gave the bell to a girl at the back of the room, who really didn’t seem like she wanted it. That might be the jealousy talking…

The end came all too soon, and we started queuing to have our books signed. Nix dedicated the books to us and was more than happy to pose for pictures. He joked about how heavy Frances’ copy of the book was, and that he might not be able to hold it up for the picture (hence the giggles on their faces). Afterwards, Frances checked with Lynne that her eyes were closed (after the Robin McKinley picture, she wasn’t taking any chances). Luckily, her eyes were open. After Nix gave Frances a questioning look, she explained to why she was checking. He seemed to find this amusing. Lynne had her book signed next, and Frances took the picture. Funnily enough, Nix’s eyes were closed in the first shot (see below)! We all laughed about this and took another picture.

Final Verdict: You should absolutely get to a book signing with Garth Nix! Not only does he write amazing books, but he is also a very friendly person! 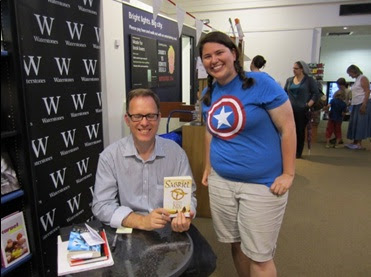