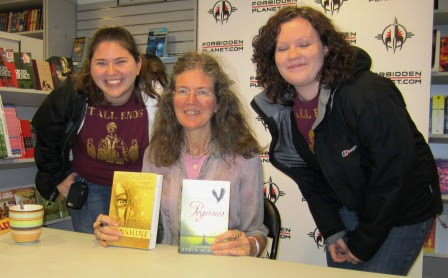 “The great thing about fantasy is that you can drag dreams and longings and hopes and fears and strivings out of your subconscious and call them ‘magic’ or ‘dragons’ or ‘faeries’ and get to know them better. But then I write the stuff. Obviously I’m prejudiced.”

We were in London on the 7th July 2011 for the premier of Harry Potter and the Deathly Hallows Part 2 (see the Frances and Lynne Adventure for the Harry Potter Premier), hence the handmade Harry Potter t-shirts! After we’d managed to get a high enough angle on the camera and catch a flash of the red carpet, we decided to head over to the Forbidden Planet comic book store. Lynne knew that Robin McKinley was going to be signing copies of her new book, Pegasus. Lynne had talked about McKinley before at one of our chai sessions at Starbucks, so although Frances hadn’t read any of her work at that time, the books were on her mental to-read list.

We arrived early and looked around the comic store. Frances found a copy of Sunshine, which Lynne had gushed about before. The cover was amazing! You can’t tell in the picture, but the cover actually sparkles, just like sunshine. Lynne found a copy of Pegasus and we purchased them at the till. While we were there, we bumped into another fan of McKinley also there for the book signing. We chatted for a while, but she ranted about Harry Potter being anti-feminist. She talked non-stop at us for a while, not allowing us to clarify her statements or argue against them. Instead, she just assumed we would feel the same as her, even though our shirts were rather visible at this point. We ended up feeling uncomfortable enough to decide to escape the store for a little while as there was still a fair amount of time before McKinley arrived.

After ducking out of Forbidden Planet, we headed into a café and grabbed a chai. At this point Lynne attempted to give Frances a complete crash course on McKinley, her books, and the little Lynne had read on her blog. Mostly it sounded something like, “Oh, my gosh, she is amazing, and writes such great strong female characters. But she comes across as a bit grumpy on her blog!”

There wasn’t a massive crowd of people at the book signing, which was nice. It felt like a more intimate meeting with McKinley. When McKinley arrived, she looked friendly and quite reserved; something Frances wasn’t expecting for such a successful author. She jumped straight in to answering questions. One fan (the one previously mentioned) asked questions about McKinley’s process of writing and how she got published. McKinley was reluctant to answer these questions and preferred to talk about her work. She talked a little bit about there being a Pegasus two, and she hinted that there might be a book that’s set in the same world as Sunshine as well (yay!).

After the questions were over, we queued to get our newly purchased books signed. McKinley dedicated the books to us, which was lovely. She even let us pose to take a picture with her J As you can see in the picture, Frances was so excited she had her eyes shut! Sigh!

Final Verdict: If you are a fan of McKinley’s work, then get yourself to a book signing!