Written by William Shakespeare
As seen in Stratford-Upon-Avon, England
November 2012 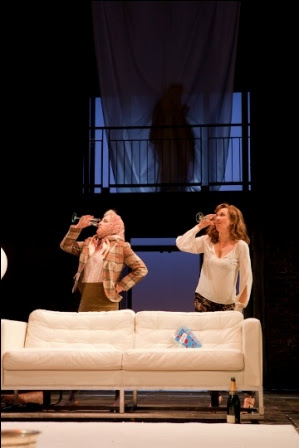 “I do begin to perceive that I am made into an ass,”
Falstaff, Merry Wives of Windsor, William Shakespeare

I have to admit that I was not looking forward to seeing this Shakespeare play as much as the others. While I knew it would be a comedy, which I usually like, I also knew it was about Falstaff. I first came across him while watching the Hollow Crown tetralogy that the BBC did earlier this year. While I love the Hollow Crown, I did not like Falstaff. I knew from reading before then that he was a famous Shakespearean character, and that he is so beloved that this play had been written for him after the Henry IV part 1 & 2 and Henry V. I was willing to give it a go, and it gave me a reason to read the play.

The story of the Merry Wives of Windsor is about love, marriage, and Falstaff. Falstaff has taken refuge in the small town of Windsor, but as he had done in the Henry IV part 1 & 2, he causes trouble with his drinking, petty crime, and attempted womanizing. He has a group of followers, and they are reaching the end of his money, so he decides to fix this. He decides to woo two local married women; women who he thinks already favor him, and who have control of their marital purse strings. He sends them the exact same letters, and waits. The two women, Mistresses Ford and Page, are good friends and both are upset by the letters even before they realize they are exactly the same. Together they hatch a plan to lead Falstaff on and then turn him away. Meanwhile, two of Falstaff’s followers who are angry at Falstaff, disclose Falstaff’s plan to the women’s husbands. The two men react very differently, with Page saying he trusts his wife, but Ford, who is the jealous type, cannot trust his wife. Ford decides to try and catch her in the act of cheating. To do this, he goes in disguise to Falstaff and pretends to be another potential suitor to Mistress Ford, and that once Falstaff has won her favor, she cannot hide behind her honor to deny him anymore. Falstaff agrees, mostly because he was already going to woo her, and Ford offers him money. Twice Falstaff is invited over to Ford’s house when Ford is away, but instead of romancing Mistress Ford, Mistress Page arrives and foretells the arrival of the jealous Ford, and that they must hide Falstaff. These hiding places lead to the abuse of Falstaff, much to the amusement of the women. While Ford cannot find Falstaff, he appears slightly crazy from his jealousy and insecurities. Eventually, the women tell their husbands and all together they device the final, and public, shaming of Falstaff. They again set up a meeting, but this time in a spooky part of the woods. They have their friends and children dressed as fairies and goblins, and they terrify Falstaff into admitting his behavior. At which point he realizes everyone knew, and that he was the butt of the joke and has to pay them back their money.

While all of that is going on, there is a secondary plot about the potential suitors of Ann Page, the daughter of the Pages. She is being courted by Slender, a native English speaker who has no sense, and is her father’s choice. The Doctor Caius is her mother’s choice, but he only has a tenuous grasp on English, and mixes often with his native French. Then there is Fenton, a man she loves but is favored by neither of her parents. There is a lot of duplicity as the men try to woo Ann, and they try to get the help of Mistress Quickly, who has offered (at a price) to help all three men to Ann. In the final humiliation of Falstaff, each of the parent’s choices are instructed to take Ann and marry her in the chaos, and that she will be known to them because of the color she wears. But Ann decides to trick both parents and is married to Fenton instead. Slender almost marries the boy he mistook for Ann, and Caius actually did marry the boy he mistook for Ann. In the end, when she reveals to her parents what she has done, and says it was for love, they accept Fenton, and the play ends with a feast.

The production of this was superb, and I enjoyed it. The set was impressive, with many fast changes, but with a small time English town in the autumn feel to it. I was also excited to see a completely different group from the previous shows I had seen. This was a nice change after having seen the same actors in three plays (Twelfth Night, The Comedy of Errors, and Tempest). There were some scenes that really had me laughing. But for all of that, I had trouble getting past the plot of the play, which is why overall, I would say I am more indifferent to this play, neither liking it nor hating it.

The main trouble for me, as I mentioned above is that I do not like Falstaff. I do not find him funny or amusing, which is what I think you are supposed to feel for him. Instead I just end up feeling a bit bad for him. In Henry IV part 1 & 2 he is the butt of many jokes, and then is cast aside by Prince Hal when Hal becomes King. His ego is so large that he is able to usually bounce back from the jokes, and spin things to his advantage, but it is he that people seem to conspire against. There are many of Falstaff’s behaviors that are hard to like or even really sympathize with. In the play, his complete belief that both woman would fall to his charm is his main fault. But I think the actions taken against him are extreme, and un-proportional to his offence.

In the end, I just end up feeling sorry for him in this play, and it feels a bit like watching bullying happen. This is something that I am still trying to process. In Twelfth Night, I am fine to laugh at Malvolo and the tricks played on him. And the first basket ride, I laughed at Falstaff, but after that it seems too much. While Malvolo was purposefully rude and mean to other people, I honestly do not think Falstaff means harm with his actions.

The romances are also a bit of a letdown in this play. While they are important to the plot, there really is not a couple that I root for. The two married couples are interesting and are good contrasts to each other; there is never really that much danger of things not working out for them. And then with Ann, we really do not get to see much of the romance. The few scenes with Ann and Fenton were some of the most awkward and poorly acted of the play, but they are also just written rather boring.

There is also another element of just laughing at people in the accents of several characters. The Doctor Caius is French, and there are some jokes on his broken English. And he seems to constantly say “By Gar” which comes out as “Buggar”. The other main source of entertainment then is Sir Hugh, who is Welsh, and people directly comment on his mispronunciations. There are scenes where the main interaction is to make the audience laugh at these characters, but I think these scenes have not aged nearly as well as the rest of the play. Both scenes felt a bit flat as only the characters on the stage laughed, and the audience just smiled politely.

I think, overall, I would say this is a play you can choose to see, but I would not go out of my way to see. I do not know if I would want to see it preformed again. If you like Falstaff, or are not as bothered about whether you should feel bad for him or not, it will be an amusing comedy to watch. I think it is not one of the best examples of Shakespeare’s works, and even a good cast cannot change that.

Final Verdict: If you are keen to see it, do so, but otherwise do not go out of your way to watch it or avoid it. Meh.