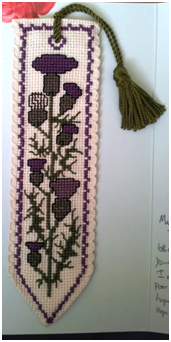 With one of my childhood friend’s birthday approaching, I realized I needed a nice card, and I wanted to include something small in the card for her. I needed a small break from my large cross stitch work and thought a small bookmark would be a great gift. When I visited another friend, we stopped by a haberdashery shop, and I was able to pick through some really nice kits. The other bookmark that I have done was from the same company, and I was happy to go with them again.

This pattern jumped out at me as it is very Scottish, and not something that is too common in America. Second, it really reminded me of Professor McGonagall from the Harry Potter Series. She is the Head of Gryffindor, and wears tartan robes. When I saw the pattern, all I could picture was this tucked into a large old book of magic in Professor McGonagall’s office or in her private rooms. Since the friend that I was making this for was the person who introduced me to Harry Potter, I thought it was only fitting.

The pattern was super easy to follow, and really straight forward to do. I was able to finish the cross stitch work in two sittings (watching some movies while I worked). The finishing took a little longer as I had to borrow the iron from my housemate. It was a bit more complicated than the previous bookmark I did, as the bottom is not flat. While this shouldn’t have been a big deal, it took a lot of folding to get it close to right, and I still don’t like how it turned out. Also stitching on the tartan ribbon was not perfect; I clearly need to work on my sewing skills before my next gift.

When I feel the urge to do another bookmark I will definitely go back to this company. I love their kits, the patterns are great, and everything you need is in the bag. Hopefully my friend likes it and gets plenty of uses out of it!