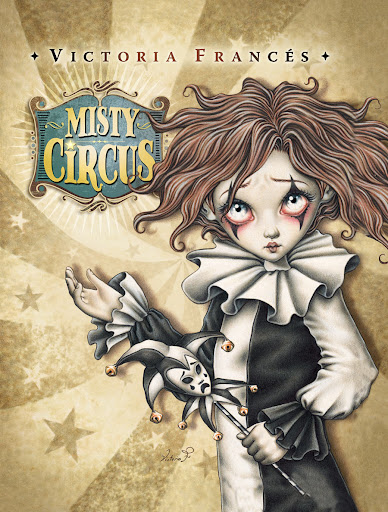 “From a very early age Sasha was known for his androgynous looks, his profound shyness and, about all, his mercurial moods, which alternated between episodes of excessive elation and utter sadness.”
Misty Circus by Victoria Francés

I am a huge fan of Victoria Francés, and have been since I first stumbled across some of her gothic paintings. As I write this, I have two of her prints framed and hanging on my wall. I also own English versions of the three Favol books. However, I have not gotten a chance to read some of her newer books, the ones where she has turned away from the more traditional gothic artwork. So I was very excited to be able to read Misty Circus (which is actually the first two books/episodes for this world in one binding; 1. Sasha, the Little Pierrot, and 2. Witches Night). Just as a note this is not a novel, but more of a picture book/art based book, and is only 74 pages.

The book tells the story of little Sasha, a young Parisian boy whose dad was a mime and whose mother was a home maker. However, tragedy strikes when his mother dies, and his father, overcome by grief, leaves. Left wandering Paris, Sasha eventually stumbles across the Misty Circus. The second story follows Sasha and his cat as they see some witches on Halloween, and they meet the young, blind witch Chloë.

I should never have doubted Francés, her artwork is still impeccable and undeniably gothic. I was not sure how I was going to like these more doll-like characters (with her previous book being based specifically on Japanese ball jointed dolls, which luckily I have learned a bit about because one of my best friend has this hobby), but Sasha will win your heart over. The art is absolutely gorgeous, and dark. The old fashioned circus and clown elements are excellently done (I have had a class only about clowns).

The story is much better written than the Favol series. It probably helps that it is an actual story instead of poetry, but there is still a feel of poetry in the narrative. There are poems and rhymes in several languages sprinkled throughout the book (with English translations included). It is a picture book, so there are pages with no writing, and there is not very much included. Having said that though, it is an intriguing story, and I really cared about what happened to Sasha and later Chloë. I would also warn people that this is not really a story for young children either, it is a little dark.

I am hoping there will be more episode/books in this series. There is something wonderful about a dark story and beautiful artwork. Plus I want to learn more about Sasha and Chloë.

Final Verdict: A beautiful dark picture book for those interested in gothic stories. One that I have already ordered!