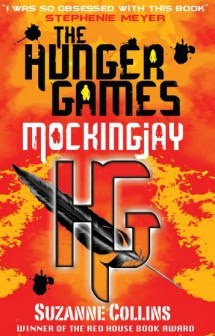 “What I need is the dandelion in the spring. The bright yellow that means rebirth instead of destruction. The promise that life can go on, no matter how bad our losses. That it can be good again”.
Katniss, Mockingjay by Suzanne Collins

Mockingjay by Suzanne Collins is the third and final book in The Hunger Games trilogy. After reading the first book, The Hunger Games, and being totally blown away by its originality and the fast action-packed pace of the book, I was a little disappointed with the second book, Catching Fire. Although, I was a little disappointed, this isn’t to say the book isn’t good, just that it doesn’t match up to its predecessor. Mockingjay, however, is as original, as fast-paced and as action-packed as The Hunger Games.

Mockingjay continues the story on from Catching Fire. Katniss finds herself in District Thirteen after she is rescued from the 75th Hunger Games by rebels. District Thirteen was reportedly destroyed by The Capitol when they rebelled against The Capitol’s rule. It turns out that District Thirteen actually moved underground. Katniss is convinced to become the face of the rebellion and becomes known as the Mockingjay. This is when the rebellion truly begins. Will Katniss and the rebels be able to take down President Snow? How many people will get hurt or die in the process?

I loved the political theme in this book. I enjoyed seeing Katniss assume her role as the Mockingjay, and I liked how realistic this was. Katniss couldn’t just act like the Mockingjay and when the rebels tried to film her making a speech, it fell flat. It was only when Katniss goes out to the front line and sees the horror of what The Capitol is doing that she is able to speak from the heart. It is then that she truly becomes the Mockingjay.

I also LOVED how Collins twisted Katniss and Peeta’s relationship. When Katniss finds herself in District Thirteen, she also finds that Peeta was not rescued from the arena. He has been taken by President Snow and brainwashed to hate Katniss. When she finally manages to convince the rebels to rescue him and he is brought to District Thirteen, their reunion is less than pleasant. Peeta hates Katniss and tries multiple times to attack her. Collin’s portrayal of Peeta is heartbreaking and I found myself teary eyed on several occasions. I did become irritated by Katniss though. I wanted her to step up and be there for him as he had been for her. Instead, she buried her head in the sand and steered clear of him, choosing to focus on the rebellion instead. It is only later in the book, in one tiny moment that you see her open up and try to help him. The question is can their relationship ever return to what it was?

I only have two grievances. First, is the sheer number of deaths. In the final battle, where the rebels attack The Capitol, things happen quickly and the action-packed fast-paced style from the first book in the trilogy returns. I liked how on edge it made me feel and I raced through the pages. While I expected people to die, it seemed a little over done and people died for the sake of dying and making the battle bloody. There were several times where a character died and I said, “What the hell!” because it didn’t seem necessary. I also quickly lost track of who was alive and who had died. In fact, if you asked me to tell you who lived at the end of the trilogy I could only tell a few names for certain (I won’t divulge now because it will ruin it). My second grievance is Gale. I feel that Collins did not develop this character to his full potential. His only real purpose seems to be as the third member of the love triangle, and as a kind of crazy, mastermind out for revenge. He is rarely in the third book, and when he is, he just annoyed me. I think you could have taken this character out of the trilogy entirely and it wouldn’t have lost anything.

The ending might not please everyone, especially the epilogue. It took me a while after finishing the book to digest everything, including the ending. At first, I wasn’t sure whether I liked it. I am not a fan of epilogues in general because they don’t allow the reader to continue the story in their own imagination. That being said, now I like the ending. It is bittersweet, but I think a ‘happy ever after’ ending would have undermined the entire trilogy.

Finally, I would like to say that one of my favorite characters in this book, but also the other two books, was President Snow. This surprised me because I generally don’t like the villain of the story. I mean, I like them only in that they serve a purpose of providing the evil in the story. I liked President Snow more than this. Not only was he quintessential to the plot, but he practically oozes evil. His whole character creeped me out and gave me chills. I could picture him so vividly in my mind and I couldn’t wait for him to appear. He is the best villain that I have read in a while.

Final Verdict: This book will have you on the edge of your seat from start to finish.

For the first and second books in the trilogy, please click the following links: The Hunger Games (book one), Catching Fire (book two).