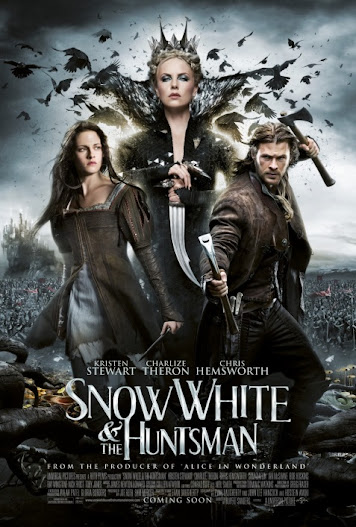 Snow White & the Huntsman is a retelling of Snow White by the Brothers Grimm. After Snow White’s mother dies, her father, King Magnus, falls prey to Ravenna’s beauty after he rescues her from an army made of glass. King Magnus and Ravenna marry but their marriage is short-lived, for Ravenna murders King Magnus on their wedding night. She takes over the Kingdom, draining the land until there’s barely anything left, and locks Snow White away. Over the years, Ravenna maintains her beauty and magical powers by draining the beauty from other women. One day, the magical mirror tells Ravenna that Snow White will be Ravenna’s downfall unless she consumes Snow White’s heart; then she will rule forever. Ravenna demands Snow White be brought before her but Snow White manages to escape. Outraged, Ravenna forces a Huntsman to hunt Snow White and bring her back. Will Ravenna capture Snow White and consume her heart or will Snow White bring down Ravenna and restore the kingdom to its former glory?

The Dark Forest contrasted nicely with the part of the forest that the Dwarves take Snow White to. This part is colourful with lots of green and flowers, plus friendlier creatures like fairies and the White Hart (a magical stag creature). It made a nice contrast and gave the viewer a glimpse of what the kingdom might have been like before Ravenna.

The costumes were also very well done. Snow White’s costume had a traditional dress that looked great once she hacked the skirt part away. Plus, Snow White also wears full armour, a new twist on the class tale. The costumes were outstanding for Ravenna though. She wore lots of gold, black and silver gowns with high collars or large shoulders, and many different crowns, one of which had lots of chains draping down from one side, under her chin and back up to the other side. You can see a few pictures below: 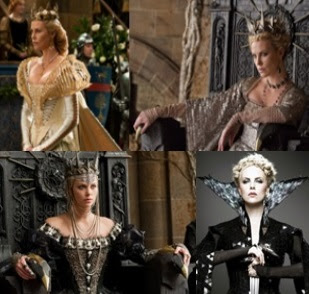 I think that Charlize Theron did an outstanding job acting Ravenna. For me, she completely stole the show. I think I actually rooted more for her because she was so enchanting to watch. Theron really captured the evil witch side of Ravenna. I loved seeing Ravenna when she was angry because Theron did such a realistic performance. Never once did I feel like I was watching an actor play an evil witch. I don’t think anyone could have done a better job. Some standout scenes include Ravenna draining the life from a young village girl, who ages in the process, Ravenna appearing out of a flock of ravens, and Ravenna aging because she needs to consume Snow White’s heart (the visual effects for this are brilliant!) I also liked seeing Theron play Ravenna’s more vulnerable side. It made her more redeemable as a villain.

I think that Chris Hemsworth did a good job playing the Hunstman. He certainly brought the Hunstman’s character to life consider the part is usually pretty small. The accent was a bit strange but the rest was convincing. The scene where he shows emotion and has tears in his eyes was a surprise. I didn’t realize Hemsworth could act that well. I think he’ll be an even bigger star after this movie.

However, not everything was great. I was really disappointed with Kristen Stewart’s performance as Snow White, Sam Claflin’s performance as William, the Duke of Hammond’s son, and the dwarves. When I saw Stewart had been cast as Snow White I was disappointed. I’ve seen Stewart act in a few movies and she’s always awkward to watch. In the first half of the movie, she acts quite well and she exceeded my expectations. I developed a false sense of hope that she might pull it off. I realized afterwards that the reason I thought she acted okay in the first half of the movie is because she was hardly in it! As Snow White became the focus of the movie, Stewart’s awkwardness became more and more obvious. In particular, there is one scene where Snow White gives a speech to rally the troops to follow her into battle. I have no idea what that speech was meant to say and I cringed throughout. It was awkwardly spoken by Kristen Stewart and the pauses in between the lines were nearly excruciating. I know that I wouldn’t have followed Snow White into battle on that day! I also think that the script writers did a bad job writing the speech because aside from Stewart’s awkward delivery, the speech didn’t make much sense. I still don’t know what she meant in the speech. You can see the speech below:

“We have rested long enough. Frost to fire and fire to frost. Iron will melt. But it will writhe inside of itself! All these years, all I’ve known is darkness. But I have never seen a brighter light than when my eyes just opened. And I know that light burns in all of you! Those embers must turn to flame. Iron into sword. I will become your weapon! Forged by the fierce fire that I know is in your hearts! For I have seen what she sees. I know what she knows. I can kill her. And I’d rather die today than live another day of this death! Who will ride with me? Who will be my brother?”

I’ve heard that the Braveheart speech was the inspiration for writing this speech. It’s unbelievable because the Braveheart speech is epic. It moves the viewer. This battle speech leaves me scratching my head wondering what Snow White is trying to say. I certainly wasn’t moved. Additionally, I question the script writers’ choices in relation to Snow White. First, she apparently heals the land. I mean, one of the dwarves says, “She [Snow White] is life itself”. I don’t really understand how she is life itself and this isn’t explained. The White Hart bows to her yes, but it isn’t clear how she is healing the land. This needed some explaining! Second, Snow White seemed to be Christian at the start of the movie. This seemed out of place in a movie with so much magic. This wasn’t really explained and aside from this one scene, there weren’t any other references, so why include this?

Turning to Sam Claflin’s character (William) and the dwarves, my problem is that they were forgettable. They didn’t really bring anything to the movie. William added an unnecessary love triangle that the movie and the dwarves, well, I guess they were there because they were in the original Snow White by the Brothers Grimm. The Dwarves should have played a pivotal part like in so many of the Snow White adaptations, but they really weren’t necessary in this adaptation.

Final Verdict: A promising remake of a classic fairy-tale let down by some poor acting and some bad script writing.