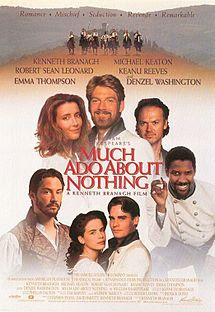 Benedick: “I pray thee now tell me, for which of my bad parts didst thou first fall in love with me?”
Beatrice: “For them all together, which maintained so politic a state of evil that they will not admit any good part to intermingle with them: but for which of my good parts did you first suffer love for me?”
Benedick: “Suffer love. a good epithet, I do suffer love indeed, for I love thee against my will.”
Much Ado about Nothing by William Shakespeare

I do not remember how I ended up owning a copy of this DVD (I think I got it at a sale), but it has sat with my other DVDs for a long time, never having been opened. It was not until I read the play and then went to see a performance of Much Ado about Nothing that I remembered I owned it. So I decided it was time to finally break the plastic and take a look.

There were two things that struck me almost immediately with this movie: that it felt old and that it had an amazing cast. To be fair the movie is about 20 years old now (it made me feel old to realize this), but it feels like a movie from the 80’s for some reason. I think it is the colors of the film, mixed with some of the transitions, but it felt really dated.

With regards to the cast, I had fun trying to figure out why so many of them looked so familiar! Kenneth Branagh directed the movie and starred as Benedick. He was supported by Emma Thompson (Beatrice), Michael Keaton (Dogberry, the local constable), Robert Sean Leonard (Claudio), Keanu Reeves (Don John), Kate Beckinsale (Hero), Brian Blessed (Antonio, Leanato’s brother), Imelda Staunton (Margret, one of the maids), and Denzel Washington (Don Pedro). It is an extremely impressive cast, and for the most part very well cast. It is also amazing to realize that this was Beckinsale’s first film, and she looks very young in the movie. I also think it was interesting to have Reeves and Washington cast as brothers, but it worked.

My only two complaints were about Reeves and Keaton. Reeves was a bit wooden, and seemed to act like himself rather than a character. It sort of works as Don John is not a pleasant person. Keaston, however, was really a strange Dogberry. Instead of being comical and silly, Dogberry came across as creepy and, for me at least, seemed to be done in the same manner as Beetlejuice. It made those scenes a bit hard to get through, and the accent was completely unnecessary.

The pacing and the cinematography of the movie were well done. There were some really beautiful shots that brought out the natural beauty of the landscape. The opening scene was a little jarring though because it shows everyone rushing off to bathe and there were a lot of naked people running every which way, but after that it settled into the story. I was a bit sad to discover that some of the lines had been removed (mostly when I went to say them, and another character had started to speak), and others were changed to asides or monologues. While I understand why this was done, I was sad that a lot of the cuts seemed to be Beatrice and Benedick’s bantering. Having said that, the movie is a much better length with the cuts, and it left time for the songs to be included.

I really liked seeing the maid being mistaken for Hero. Margret had similar hair to Hero, and from the distance it was easy to believe it was Hero. This has always been a bit tough to do in live performances or hard to believe when reading the play, yet it worked in the movie. I think it made it more understandable for Claudio and the Prince’s rage. Claudio’s denouncement of Hero was a terrifying thing to watch as he really went for it. He was throwing Hero around, knocking down decorations and scaring the other guests.

The movie had a much darker feel to it than the other versions I have seen. When I stop and think about the actions happening though, the darker feel is more realistic to the events that happen. Personally, I like when things are treated with just a bit more levity. When Beatrice asks Benedick to challenge Claudio, she is scarily serious. And when Benedick goes to deliver that challenge, it is again scary, and very believable that he will try to kill his former friend. Even the talk between Beatrice and the Prince, where the Prince proposes to her, is darker than it usually is performed. The talk is serious and Beatrice is much more solemn than I have grown accustomed to.

My one other big contention with the movie, is that it is clear that Branagh was acting and directing it. The only character that kept most of their dialogue, and specifically monologues, was Benedick. There were at least three times when he was the only one speaking to the camera, but Beatrice only had one (which was much shorter). Benedick was also the one that was able to keep some more of the physical humor in the play during the noting scenes, Beatrice was just eavesdropping. I was a little disappointed with these choices as the movie was not nearly as funny as I like (especially not for a comedy).

Overall it was an enjoyable movie, but it was not the comedy that I wanted. It is more serious and focuses on the Claudio and Hero plot rather than on the Beatrice and Benedick plot (which is my favorite part).

Final Verdict: If you are a fan of Shakespeare or Branagh, see it. If not give it a pass and find a better comedy.