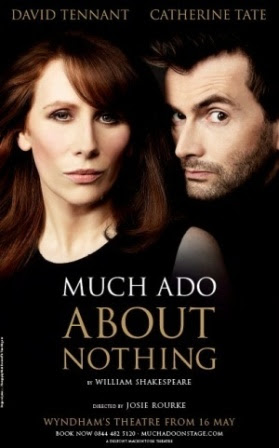 “I love you with so much of my heart that none is left to protest.”
Beatrice in Much Ado about Nothing by William Shakespeare

After seeing a performance of Much Ado about Nothing, I felt I needed to see another version of it right away, to see if the play really was as funny as I thought it was. There was one version that I had been looking forward to watching; a filmed version of Much Ado about Nothing that was performed in the Wyndham’s Theatre in 2011. It was mostly because it had David Tennant and Catherine Tate in the lead roles, and I knew them both from Doctor Who (well, David from other movies as well). I was able to find a copy that I could buy online, and I went ahead and took the plunge.

This movie helped show me that regardless of the staging, Much Ado about Nothing is a very funny play. I enjoyed the movie a lot. It was a bit hard not to think of David and Catherine’s Doctor Who characters, when watching their Benedick and Beatrice, even though they are both really good actors. For me that only added to the play rather than taking away from it.

The setting for the play seems to be roughly current time, and the outfits and technology reflect that. I really liked the modern take on the costumes, especially in the masquerade scene. David’s costume in that scene really had me laughing, especially where he keeps his cigarettes!

The physical humor that the two leads add to the eavesdropping scenes was brilliant. While the words in these scenes are great, the added little bit of the physical humor was really worth it. David ends up covered in paint and wandering bemusedly around the set. Catherine ends up in a harness swinging in the air between 2 and 20 feet off the ground. The separate reactions to the “love” of the other are brilliant and so in character that it is hard not to cheer along with them.

Both Beatrice and Benedick are very happy go lucky and witty, so it is very different to see them upset in the second half of the play. Seeing Benedick’s face when he delivers his challenge to Claudio is haunting, and really portrays that his character has to choose a side, and he is disappointed in his friends. Beatrice really is crying when her cousin faints, and her rage is palpable and completely understandable.

While this is a staged version that was filmed in front of a live audience, the transitions are wonderful as are the sets. It is easy to forget that it was a play and not just a feature film. I think it helps that it appears to have been a well funded performance of the play.

I really, really enjoyed this performance, and have already watched it 3 more times. I think it might become my go to movie when I have had a bad day. I have a feeling a lot of my friends are going to have to be introduced to the Bard and this movie!

For those who wish to see this version, you can rent or buy a copy here.

If you are curious, here is one of the songs from the play that is sung by David and Catherine. I have to admit I rather like this song!

Final Verdict: Run and push small children out of the way to go and see this! Any performance of Much Ado about Nothing would be worth it, but this version will keep you laughing throughout.