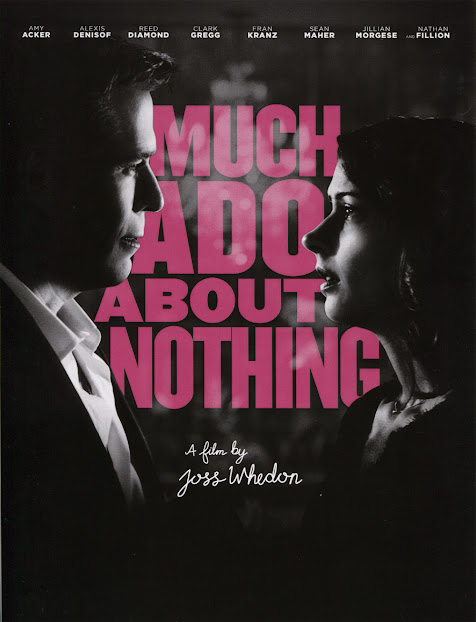 Benedick: Then is courtesy a turncoat. But it is certain I am loved of all ladies, only you excepted: and I would I could find in my heart that I had not a hard heart; for, truly, I love none.
Beatrice: A dear happiness to women: they would else have been troubled with a pernicious suitor. I thank God and my cold blood, I am of your humour for that: I had rather hear my dog bark at a crow than a man swear he loves me.
Much Ado about Nothing by William Shakespeare

One of my favorite plays by William Shakespeare is Much Ado about Nothing, and one of my favorite directors is Joss Whedon. So when I found out that Whedon was going to be directing a version and that he had done so because he loved the play, I knew I had to see it! However, I had to wait for it to finish the film festivals and then come over to the UK. Even then, the movie is only showing at a handful of cinemas, but I eventually was able to watch it!

The first thing that struck me while watching this movie was how well the director understood the text. Throughout, there are just little touches that not only help the story, but show that Whedon truly understood the text he was working with. The clearest to me, was starting the movie with a scene of the first romance of Beatrice and Benedick, the hinted at reason why they now verbally spar every time they meet. It added to the depth of their characters and their relationship, such as when Hero faints at the wedding, Claudio still tries to go to her and briefly forgets his anger at her. There are many of these moments, and I loved them.

It was hard to place the feel of the movie, it fell somewhere between a well done indie film and a student project. There were moments where it was beautifully done, and so perfect. Then there were moments where you realize how small the set is, and question some of the choices, such as the black and white colorization. The set is beautiful, Whedon’s own house, and provides humor, but there are no scenes anywhere else. It does allow for some funny scenes, such as Benedick and Claudio staying in a young girls’ room with all the decorations to match.

When you have a director like Whedon, many of the actors will do anything he suggests, and with this film many of the faces are very familiar. This works in the films favor, as many of the actors are very good, and clearly understand what they are saying and portraying. For me Clark Gregg (Agent Coluson from The Avengers) as Leonato, Nathan Fillion (Mal from Firefly) as Dogberry, and Amy Acker (Kelly Payton from Alias) as Beatrice, were all very well cast and acted. My favorite from this cast though was Sean Maher (Simon from Firefly) as Don John; he was amazing. He was able to bring the quiet resentment and discontent to the role that just made it perfect.

There were other characters I was not as happy with. For me, Alexis Denisof (Wesley Wyndam-Pryce from Buffy the Vampire Slayer and Angel) as Benedick, just didn’t work. He was able to bring some of the humor to the role, but there was something just off. I think it may have been his voice for me, and that he never really clicked with Beatrice. The other was the woman (Riki Linhome who played Harper in Enlightened) playing Conrade, she didn’t seem to really understand what her character was saying, and amongst all the other very good acting, hers stuck out in a bad way.

The only thing to keep me from raving about the movie is that while I laughed, it was not the funniest version of the play that I have seen (see the 2011 version with David Tennant and Catherine Tate). There was also a conflict in the timeline for me in this version. After Leonato finds out what has happened and sentences Claudio to his punishment, Hero and Beatrice see Claudio mourning at Hero’s grave. Yet in the next scene, Benedict and Beatrice are interrupted and told that everything has been revealed; how did this take all night to find out, and what reason did Hero and Beatrice think Claudio was going to the grave? Usually Claudio’s mourning does not happen until after the scene where Beatrice and Benedick find out that everything has been cleared up. This timeline issue bothered me because there were so many ways to fix it!

The other thing that was a bit off, but is more of a personal opinion is the amount of drinking. There are almost no scenes where alcohol is not being poured and drunk. Honestly, I don’t know if we ever saw Beatrice sober. With the modern setting this seemed a bit out of place. The drinking and the black and white color scheme made me feel like the film should have been set in an older era, maybe the same period as The Great Gatsby. It just felt a bit mixed up to me.

Overall, I still really enjoyed the movie. It was a great adaptation, especially for those that love the film. For once for me, even though some lines had been edited out, I still loved the movie. Of the three versions of Much Ado about Nothing, this is the version that understood the text the best. My favorite version though is still the 2011 version. My least favorite is the 1993 version by Kenneth Branagh.

Final Verdict: A good film, which makes Shakespeare easily accessible to everyone, and will be loved by fans of the Bard.