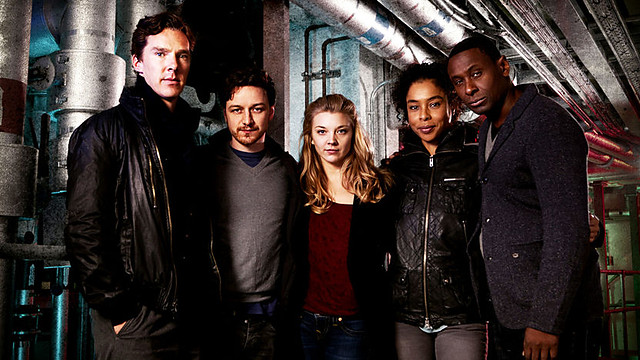 “You’ve a good heart. Sometimes that’s enough to see you safe wherever you go. But mostly, it’s not.”
Neverwhere by Neil Gaiman

When I first saw the news that there was going to be a radio play of Neverwhere, I immediately had to let Frances know. Then I saw the cast, and things only looked brighter. The only problem was that it would be playing while my brother was visiting, so I would not be able to listen when they originally aired. So it was with so much anticipation that I finally listened to the story of London Below!

Neverwhere tells the story of Richard Mayhew, a Scottish man who moved to London (often referred to as London Above in the book) two years earlier. On route to dinner with the fiancé’s boss, a young woman tumbles to the ground in the London tube station. Richard stops to assist her and finds that she is bleeding. The young woman refuses to be taken to the hospital, but asks Richard to take her somewhere safe to recuperate. Richard obliges, but at a great cost to his relationship and his life. Soon, everyone that knew Richard no longer appear to recognize him. His workplace removes his desk and his colleagues think he is a client. His fiancé also doesn’t recognize him, and thinks he is a past acquaintance whose face she has forgotten. Richard thinks that everyone is pulling an elaborate prank at first, until the letting agents show people around his flat, while he is naked in the bath! Richard has been thrown into London Below, a place that exists underneath London Above; literally underneath, in the sewers and abandoned train stations and bunkers underneath the vast city. Richard is sent on a whirlwind ride as he tries to help the Marquis de Carabas (a mysterious man with magic up his sleeves) and Hunter (a hunter of mythical beasts and bodyguard) protect Door (the young woman he helped) from two hit men; Mr. Croup and Mr. Vandemar. Will Richard be able to keep Door alive? Will Richard himself survive in such a strange place? Will Richard ever be able to return home?

I will admit that I own the audio book for Neverwhere, as read by Gaiman himself, so this is not my first time listening to the adventures in London Below. While I love Neil Gaiman’s version, there is something really amazing about hearing a different voice for each character. Certain scenes really came to life, and were amazing with all the different voices. For me, one of the best scenes was the Ordeal of the Key (where Richard must try to obtain a key while something tries to distract him). But in other scenes having all the voices was a bit distracting, such as in the final fight scene, where there was so much noise I had trouble understanding what was happening..

Most of the cast was amazing, and absolutely perfect for their parts. I could not have imagined a better Islington, played by Benedict Cumberbatch. Cumberbatch was able to bring the otherworldly side to the angel, and the things he was able to do with his voice for the ending were amazing (and now I really can’t wait for the next Hobbit movies where he plays the dragon Smaug and the voice of the Necromancer!). McAvoy, who voiced Richard Mayhew, was able to bring the good natured side of Richard to life, and his narration of the crazy world was great for the listener.

There were just two problems in the casting for me. The first smaller issue was that I had a lot of trouble knowing whether the person speaking was Croup or Vandemar. I love Anthony Stewart Head’s voice and thought he was perfect for Croup (bringing out the pompously verbose side), but I was hoping that Vandemar’s voice would be very different (maybe more gravely and animal like). There were times where it worked, and it was easy to tell who was speaking (especially because they say each other’s names a fair bit), but other times I really couldn’t tell.

The biggest casting flaw was Door; she was not how I imagined her. If I was just listening to this version of Neverwhere and had never heard the story before, I think it would have been fine. However, in the story she is supposed to be a young girl of about 16 years. Instead she sounds about the same age as Richard. I feel this really changed the dynamics of their interactions. In the novel, the age gap means it is just friendship between the two (or at least for the duration of the book). However, the radio play seems to bring out a slightly more romantic side to their interactions.

I have to say, I really loved this version of Neverwhere overall. I thought it was a really great condensed version of an amazing novel. I am not sure if all of it will be completely understandable to someone who hasn’t read the novel, but I think it will be enjoyable nonetheless.

Final Verdict: A great radio play, and a great escape. Something to listen to on a long trip!