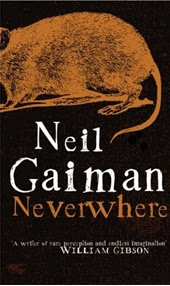 “You’ve a good heart. Sometimes that’s enough to see you safe wherever you go. But mostly, it’s not.”
Neverwhere by Neil Gaiman

Lynne recommended that I read Neverwhere by Neil Gaiman. I enjoyed reading Stardust and Coraline, both also by Gaiman, so I thought I’d give it a whirl. Neverwhere is a modern retelling of Alice in Wonderland, and is Gaiman’s best book, in my opinion. It is thoroughly modern, and although you wouldn’t know it was a retelling of Alice in Wonderland without being told, there is an otherworldly sense about London Below that has the same feeling as Wonderland. Gaiman’s imagination never ceases to amaze me, in this book in particular.

Neverwhere tells the story of Richard Mayhew, a Scottish man who moved to London (often referred to as London Above in the book) two years earlier. On route to dinner with the fiancé’s boss, a young woman tumbles to the ground in the London tube station. Richard stops to assist her and finds that she is bleeding. The young woman refuses to be taken to the hospital, but asks Richard to take her somewhere safe to recuperate. Richard obliges, but at a great cost to his relationship and his life. Soon, everyone that knew Richard no longer appear to recognize him. His workplace removes his desk and his colleagues think he is a client. His fiancé also doesn’t recognize him, and thinks he is a past acquaintance whose face she has forgotten. Richard thinks that everyone is pulling an elaborate prank at first, until the letting agents show people around his flat, while he is naked in the bath! Richard has been thrown into London Below, a place that exists underneath London Above; literally underneath, in the sewers and abandoned train stations and bunkers underneath the vast city. Richard is sent on a whirlwind ride as he tries to help the Marquis de Carabas (a mysterious man with magic up his sleeves) and Hunter (a hunter and bodyguard) protect Door (the young woman he helped) from two hit men; Mr. Croup and Mr. Vandemar. Will Richard be able to keep Door alive? Will Richard himself survive in such a strange place? Will Richard ever be able to return home?

Neverwhere is a fascinating read, and a book that I couldn’t put down. I didn’t race through the pages as I do other books, but that’s because part of the books charm is the amount of clever detail. London Below is such a different place to London Above. Firstly, the scenery is different because London Below is in the sewers and abandoned train stations and bunkers below London. Gaiman’s descriptions of London Below are detailed enough that you can really picture what it’s like. Towards the end of the book, where the action picked up, I did want a little less detail so that I could find out what happened, but that was just my impatience. Throughout most of the book there is a good balance between detail and action.

The characters have a lot of depth, and I get the feeling that each character could have a story of their own. Door is able to open doors that are closed or locked and open doors where there are no doors etc… Her entire family was capable of doing this also and has a reputation in London Below. Tragically, her entire family was murdered prior to the start of the book, leaving her to avenge their deaths. I would be interested to know more about Door and her family history and their ability. For example, the house that Door’s great grandfather built is essentially an entrance hall filled with images of rooms, spread all over London Above and London Below.

The Marquis de Carabas was also an interesting character, one that I wasn’t sure whether to trust, just as Door isn’t sure. I think this is just part of his character and Gaiman portrays this wonderfully. The reader gets a glimpse of the kind of things de Carabas gets up to in Neverwhere, the tricks he pulls and the trades he makes. Again, I would love to know more about de Carabas. I am sure he has gotten up to a lot in his lifetime. There are also hints of magic in London Below when de Carabas pulls out all kinds of items that do strange things. For example, de Carabas has a music sheet that will draw money from people. I came to like de Carabas more and more as the story progressed.I learned that de Carabas is kind of like a genie, in that he will give you what you ask for, but there might be strings attached or it might have other negative consequences. He always keeps his word, however. He owed Door’s father a favour and he repays that favour by protecting Door to the point where he puts his own life at risk.

Finally, while Mr. Croup and Mr. Vandemar are the villains of the story, they are absolutely fascinating, and I simultaneously wanted and did not want to know more about there. Even now that I have finished the entire story, I am still unsure whether they are human and if not, what they are? Near the beginning of the book, for example, Mr. Vandemar tosses bread to pigeons to draw them into a trap. He catches one and simply bites its head off. This is written in a manner that makes it seem normal for these two. This is just one of many, many more instances of strange, violent behavior from Mr. Croup and Mr. Vandemar. Gaiman’s descriptions of them left me shuddering or with chills running up my arms. It’s not just the violent behavior that is interesting, but immunity to harm and their immortality. They are probably the best villains that I have read in fantasy fiction.

The ending of the book surprised me, but in a good way. First of all, I didn’t guess who Mr. Croup and Mr. Vandemar’s employer was. That automatically pleased me because I’m not a fan of predictable plots. Second, while some people may want a little more action in the final show down, that wouldn’t have been very realistic. Plus, Mr. Croup and Mr. Vandemar do provide enough violence and gore throughout the entire book. The book leads up to a climax that, to me, is not disappointing. The ending of the book is left open in a satisfying manner, so that the reader can continue imagining stories in London Below to their heart’s is content.

Just to note that I read Gaiman’s preferred author text for Neverwhere. I have not read the original, so I can’t tell you what is different, except what Gaiman has told me is different. There is an introduction to the book, the end of which I found fascinating. Towards the end of the introduction, Gaiman talks about a book he read called, The Lost Rivers of London, and how a brass bed was found in a sewer in London that no one could explain. Gaiman suggests that de Carabas would know. This just adds to the believability of the story. I’m sure that next time I visit London, I will be paying attention to everything and watching the gaps as I step off the train, just in case. There is also another prologue where the reader would have met Mr. Croup and Mr. Vandemar for the first time, for those of us who are curious. It didn’t make it into the original book, and the descriptions of Mr. Croup and Mr. Vandemar were moved into the prose. I actually think this prologue should have been kept over the actual prologue (showing Richard in Scotland before moving to London). While the latter contains the interesting palm reader who tells Richard to avoid doors, the former really gives you a feel for the tone of the book, and the expectations are much higher. Mr. Croup for example, promises to kill people.

Final Verdict: This book is in my top five books of all time. I would definitely recommend you read this!