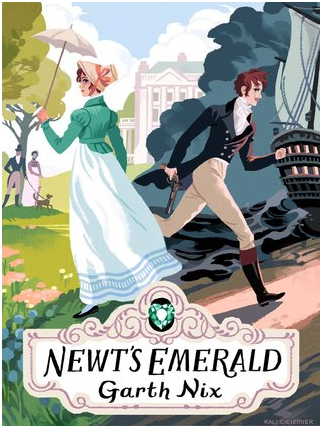 “Truthful stared down at his set face, and fought back the urge to cry. No-one had ever spoken to her like that before, but fear soon gave way to her own anger.”
Newt’s Emerald by Garth Nix

I have always been rather reticent to read regency based novels, or even see regency based movies. However, recently Frances has been showing me the errors in this way of thinking. So when Garth Nix, one of my favorite authors, released an e-novel that was a magical mystery set during the regency period, I did not hesitate to buy a copy.

On her 18th birthday, Lady Truthful Newington (or Newt to her cousins) is shown the dazzling ensorcelled emerald that she will inherit on her 21 (or 25th) birthday. However, while her father is showing Truthful and her three cousins, disaster strikes and the emerald is stolen seemingly by magic. Having already planned to venture to London in a months’ time for her grand coming out, Truthful decides to leave early in search of her emerald, especially as her father believes the emerald is contains the luck of the Newingtons and without it disaster will strike them. Truthful’s great Aunt (her chaperon in London) suggests disguising Truthful as a man so she can more freely look for the jewel. While in disguise Truthful meets Major Hartnett and together they beginning a dangerous adventure to find the emerald, which now has endangered much more than just Truthful’s family and reputation.

Once I started to read this novel, I finished it within half a day, as I could not put it down. I tried to sleep as I had read late into the night, and I should have just finished the book. I loved the story, the characters, and the world that Nix created. I am already looking forward to re-reading at a slower pace to catch more of the details that I might have missed in my rush to figure out what happened!  Yet again, Nix has created several amazing, strong female characters that are great to share with all your loved ones (and a bunch of fun male characters too)!

It took me a little bit to warm to Truthful. While she was strong she floundered a bit more than I was expecting, but it fit the story. Just when I thought I might be getting close to finding her boring, she stepped up and became amazing. There were some extremely clever and brave things that she did, that made me very happy I had not given up on her. One of my big pet peeves in stories is when a strong female falls in love and then suddenly is a damsel in distress, Truthful is the opposite, she is ok before, but it seems her love or confidence in herself make her a badass! I think in hindsight, it was refreshing to have a female character who cross-dresses, but that it is a struggle to pass, and where acting masculine is not second nature. She had some great lines, and there is something about her that endeared her too me. One of my favorite exchanges that showed her trouble of playing masculine is the following. “‘Please don’t mark my face,’ she said suddenly, thinking of the difficulties a black eye would raise for Lady Truthful. She clenched her fists again at the thought, presenting a slim boyish figure, with a fighting stance as open as a door.”

As I mentioned I actually liked that the cross-dressing was difficult for her. Nix actually took into account the fact that it is rather hard to turn an 18 year old girl into a man on a whim. This was cleverly addressed by some familiarity of her having done something similar as a child, guidance from a great-aunt who had experience cross-dressing, and a magic glamour to fix the change. Even more convincing was the reassurance that the cousin that Truthful was pretending to be, Henri, was particularly womanly. I really liked this subtle attention to detail, rather than readers having to suspend their disbelief.

I enjoyed the interactions between Charles (Major Hartnett) and Truthful. There was a bit of Mr. Darcy and Elizabeth in their interactions when Truthful was herself. However, there were some great moments when Truthful was Henri. There was a wonderful uncomfortableness to their interactions, as Truthful is painfully aware of the social rules being crossed. I know I spent a lot of time waiting for the big reveal to Charles about Truthful, and I was not disappointed. However, it was their interactions at the end of the book that I loved best. There were many moments it could have slipped to having one of them be the more powerful, but in the end it felt like they truly were equals in their adventure.

The one thing I was a little disappointed about was how subtle the magic was in the story. There seemed to be more talk about the magic and powers, than any demonstrations. However, when the magic was used these were some of the best moments in the story. It was interesting to have Truthful not being one of the strongest magic workers, and it made the few moments she used her magic more interesting. I loved the linking of the magic to much older ideas of magic, with hints about certain metals, and fays. I just wish we could have seen just a bit more magic.

My absolute favorite part of the whole story was great aunt Ermintrude. I have decided that she is who I want to be when I grow up/get older. She is so full of life, even when she is sick in bed, with a strength that keeps the story going. I love how mischievous she and her maid are (and possibly a bit dangerous too), and I would have loved to see more of both of them. Ermintrude just stole the scene every time for me. She has secret passages in her house, carries real blades to parties (sometimes even openly), she is practical about things, unflappable, incorrigible, and willing to let things play out for a bit before she steps in to make sure her family is happy. I really like how clearly she loved her departed husband, and cares for Truthful, and wants Truthful to be who she was meant to be. I want a book on Ermintrude and her adventures, young or old, she would be fascinating, and I honestly will be her when I get old!

Final Verdict: A fun read, with elements for everyone, and makes you smile as you read it!

One thought on “Newt’s Emerald”