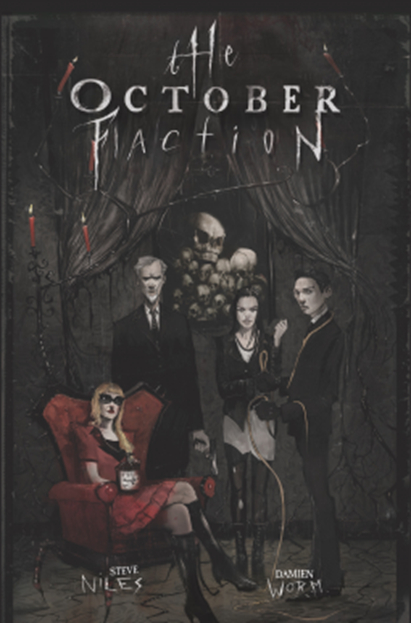 “But I bet you didn’t know this, the word ‘monster’ also has roots in the ‘monere’ which means to help or instruct. Do we like to be afraid? Do we like to confront our fears and externalize our internal struggle? Or is it that we love monsters because so often we are the very monsters we fear most?”
The October Faction: Volume 1 by Steve Niles and Damien Worm

The October Faction: Volume 1, is the collection of the first 6 issues of the comic. The story follows the Allan family and the strange situations they find themselves in. The head of the family is Fred, currently a professor who teaches about monsters, before that though, he was a monster hunter, one that collected many enemies over the years. His marriage to his wife is a bit strained and she has resorted to strange methods to gain his attention. Their two children, Geoff and Vivian, have finished high school and instead of going to university, they want to join the family business and hunt monsters as well. Like all families they have their ups and downs, but unlike most families they have ghosts around the house, friends of the family who turn into wolves, and know how to dig a grave. 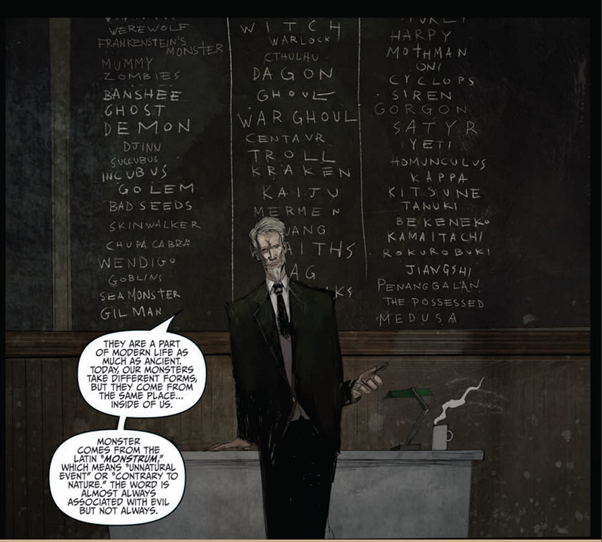 I knew nothing about the series before I requested it from NetGalley, all I could see was that there was something about monsters and the art style looked intriguing. Thankfully, it worked out, as I loved the series. It reminds me of nothing more than a more grown up version of the Addams Family, which has always been one of my favorites. There are monsters and a creepy family, but at the heart of it, the family really cares about each other and that love is what carries them through.

The art really works for the tone of the series, as it is dark and a bit stretched out. This works, especially when the monsters are on the page or the fighting is happening. There are a handful of flashbacks that are done in black and white, with a single color added, and these are visually very interesting. My only real issue with the style is that it is not very consistent, and this is especially noticeable with the children, sometimes they look almost as old as their parents and sometimes not quite as old (but certainly always older than their 19/20 years should be). 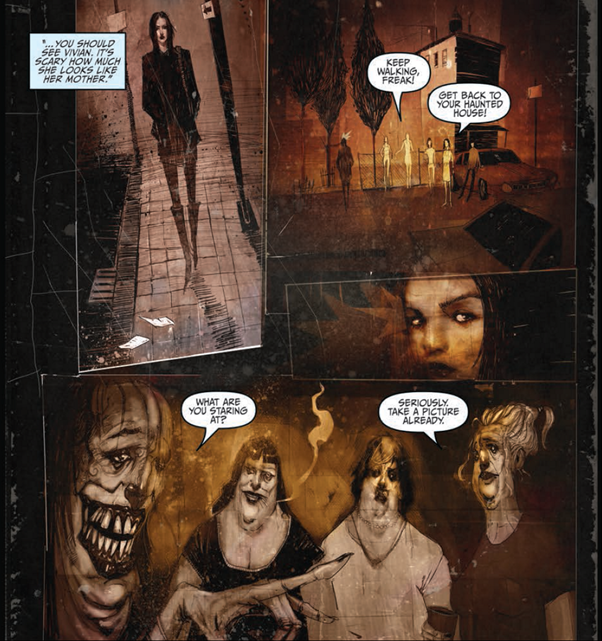 The plot is clearly still in the early stages, but it has me intrigued enough that I have added October Faction to my monthly comic subscription. There is the main antagonist Cope, and it is not clear why he and Fred do not get along, but it is clear there is going to be a big fight between the two. Fred has clearly tried to leave his life as a monster hunter behind, but everything is conspiring to bring him back to it, and he is more than ready to return to it. 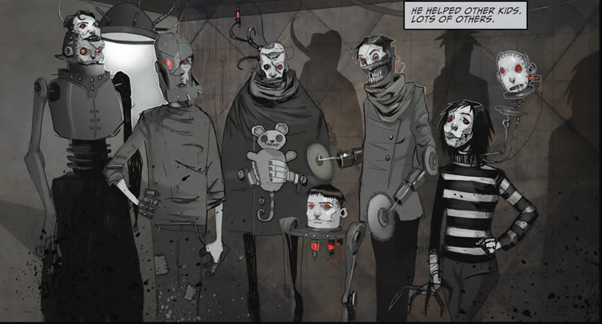 As far as the characters go I loved Vivian and Geoff pretty much from the beginning. They are easily relatable to anyone that was not part of the main crowd in high school. They both clearly did not have a good time, and are now trying to pursue what they really want to do. Plus, they clearly care about each other, which is always a positive for me. They are the most fun to watch interact with the “normal” people of the town. It will be fascinating to find out more about their powers in future issues. 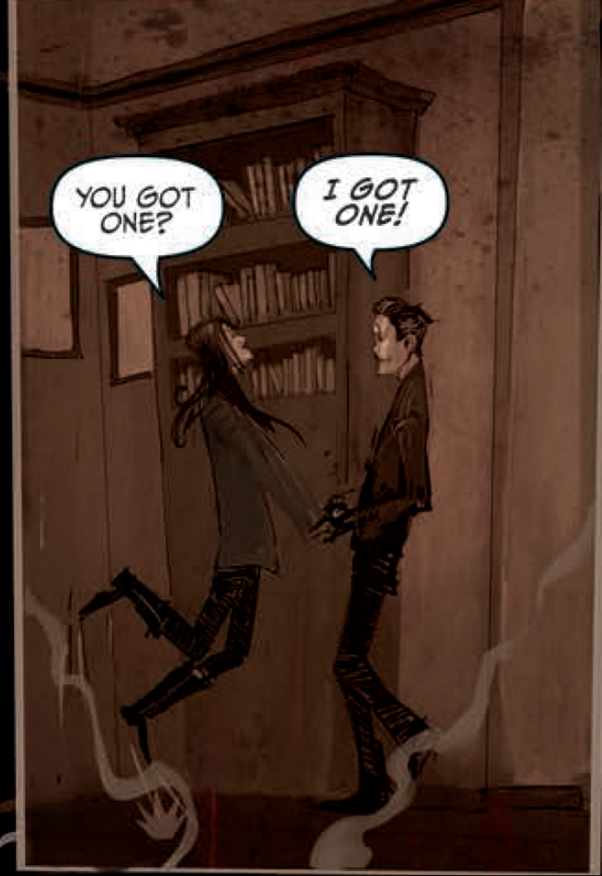 The university teacher and student in me was instantly intrigued by Fred, as we first meet him when he is lecturing on monsters. While I like him, there is a darkness to him that is slowly being revealed, but the mysterious aura works for him. His motivations are still a bit obscure, but he has some really great moments, especially when you realize he is a man of action first.

Overall, this is one of the best new comics I have read in a while. As I mentioned it is a bit of Addams family, with monster hunting, and a dash of family drama. There is also some great humor in it as well, and I actually laughed as several of the lines. I look forward to seeing where the story goes and progresses.

Final Verdict: Great new comic that will appeal to fans of darker comics with dashes of humor and family that reminds you what really love is!