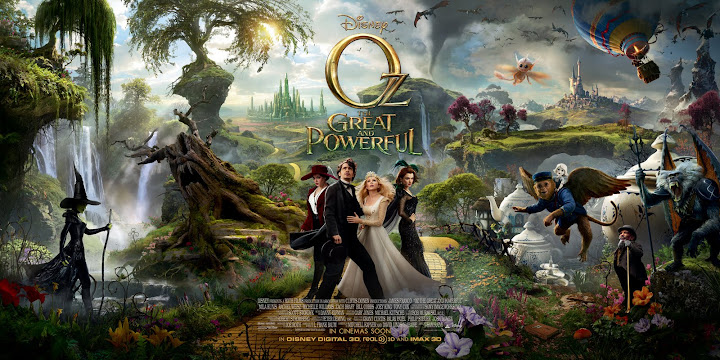 “The land you know. The story you don’t.”
A tagline for the movie.

When Lynne and I first saw the teaser trailer for this movie, we were both very excited. The land of Oz looked – well, I’m not sure how to describe it and do it justice – amazing (that will have to do). It was the land of Oz from The Wizard of Oz staring Judy Garland, but what I imagine it would have been like had the technology allowed it in 1939. After seeing the second and third trailers, which were longer, we began to have doubts. While I was still fascinated by the digital art, Lynne and I were becoming increasingly worried about the gender roles assigned to the characters. It really seemed a bit strange that so many powerful women would need a mortal man to come and rescue them from the wicked witch. After much deliberation, I decided to go and see the movie.

Oz: The Great and Powerful tells the story of how the Wizard of Oz came to be, and hence is a prequel to the original movie (1939). The movie follows the story of Oz, who is a magician at a travelling circus in Kansas. He isn’t a very upstanding person in that he uses tricks which he claims are true magic to take money from people, and he appears to be a womanizer. As he tries to escape from the strong man, Oz takes off in a hot air balloon, only to be sucked into a tornado. Oz then finds himself in the Land of Oz. There he meets Theodora, a witch, who tells him of a prophecy that the King made shortly before he died: that a wizard with the name of the land (Oz) would arrive and save them all from the wicked witch. Oz would then become King of the Land of Oz, and receive the wealth of the Kingdom. The problem is that Oz is not a wizard. Can he pull of his greatest con and convince everyone including the wicked witch that he is the almighty powerful wizard of Oz, or will he die trying?

To be honest, I am just as ambivalent about the movie after seeing it as I was before. I like and dislike the film about equally. I’ll start with what I liked about the movie, and then go onto what I really didn’t like.

The most amazing part of the film was the links to The Wizard of Oz. I hadn’t realized that this wasn’t a remake of The Wizard of Oz, but rather a prequel, so the links surprised me. Many of the links were subtle, some of which I only realized afterwards. I’m sure there are more that I have missed, and I look forward to finding them at a later date. These ranged from characters and landmarks that appeared in The Wizard of Oz (e.g., Glinda the Good Witch, and Emerald City), to the giant projection of the almighty wizard of Oz’s face surrounded in fog just like at the end of The Wizard of Oz, and even some of the original music mixed in with the background music.

I also loved the visual art that created the Land of Oz. The first few scenes where the Oz arrives are stunning, and reminded me of Tim Burton’s Alice in Wonderland. The later wide shots of the Land of Oz, as well as the details of the land up close are fascinating to watch throughout the entire movie. I also watched the film in 3D, and while I am not a fan of 3D generally, it really worked well for this movie. Also, the opening credits were fabulous in 3D; it seemed like they were made especially for 3D effects. Probably the best opening credits I’ve ever seen.

The main aspect of the movie that I didn’t like was the gender roles. I have somewhat of an issue with books and movies that constrain women into traditional female roles, and men into traditional male roles. Sometimes this works, but most of the time it doesn’t. In Oz: The Great and Powerful, Oz (played by James Franco) is a womanizer who is often seen flashing strange, half smiles at women, which screw his face up. The women swoon at his charms (frankly, I couldn’t see it), and are all in desperate need of his help. Oh, and these women are powerful witches (played by Rachel Weisz, Mila Kunis and Michelle Williams) and Oz is a mortal with no power… The movie explains that the reason the women have all been waiting for Oz to save them is because shortly before the King was killed, he prophesied that a Wizard who come to the Land of Oz and save everyone. The problem is that when it comes down to it, it’s really more of a joint effort between Oz and Glinda (Glinda actually resolving one of the biggest threats to the Land of Oz alone). I could potentially have forgiven the movie for this had the gender roles not continued in the details of the film as well. There are a few scenes at the beginning where Oz helps Theodora (played by Mila Kunis) across stepping stones by holding her and hand hoists her into a gap behind a waterfall to protect her from the flying monkeys (well, they’re more like gorillas). It is this dependency on the male wizard that frustrates me. Theodora is a powerful witch who can hold fire in the palm of her hand, and yet she can’t cross a few stepping stones on her own? I don’t buy it. I know that the movie is meant to be based before The Wizard of Oz, so this would have been a time where more traditional female roles would be appropriate, but I think that in a fantasy place like Oz, the movie could have done without it and still retained the 1920’s-1930’s feel. Plus, Mila Kunis does wear trousers, something which would not have been worn by women at the time the movie was set, so why include some traditional female roles and not others?

I also didn’t really see why some of the characters were necessary. For example, the flying monkey, Finley, who helps Oz, is a little strange. The graphics don’t seem as well done as the other characters, and the voice over is a little annoying when Finley speaks for a long time. Then, there’s China Girl, a china doll who joins Oz’s quest when the wicked witch has her town destroyed. The graphics for this character and the town were outstanding. She really looked like a china doll and the scenes where she interacts with Oz (e.g., they hug) don’t show the CGI.

I think the movie was also lacking magic. Oz’s quest is to kill the wicked witch and hence this is the focus of the entire movie, yet there isn’t actually that much magic. The wicked witch mainly uses the flying monkeys, who fly around and destroy towns and try to kill Oz. When the wicked witch does use magic, she produces fire from the palm of her hand. This is similar to Glinda, only she produces light from her wand. I expected the magic to play a more pivotal role, and yet it focused around magic tricks that Oz puts together. I think it comes back to why Oz is even needed when Glinda is a powerful witch. I guess he serves as a good distraction…

Lastly, I was looking forward to seeing the wicked witch (I won’t reveal which actress as this might border on the lines of a spoiler although you can probably tell from the trailer), and yet I was rather disappointed. The costume and prosthetics used weren’t that well done. Yes it was traditional, but I found the colouring and the nose prosthetic in particular a little strange. Plus, the acting was overdone, in my opinion. I found myself cringing a few times.

Final Verdict: I would wait for this movie to come out on DVD and then rent it or wait for the price to drop.