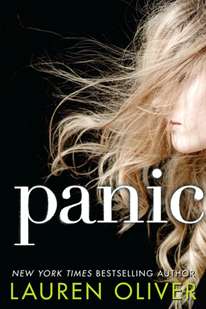 “The rules of Panic are simple. Anyone can enter. But only one person will win.”
Panic by Lauren Oliver

Thanks to NetGalley I was able to read an advanced copy of Panic, a standalone young-adult book written by Lauren Oliver. Panic follows Oliver’s successful trilogy called Delirium. Panic is an illegal game played by seniors who have just graduated from high school. There are a series of challenges spaced out over the summer where the players must overcome their fears in order to get to the next round. The last one standing receives 50+ grand, which is the one chance to get out of Carp (a dead-end town). Panic tells Heather and Dodge’s stories, both competing in Panic but for very different reasons. Heather desperately needs the money so that she can make a better life for herself and her sister. Dodge doesn’t care about the money, only revenge. Will Heather and Dodge be able to overcome their fears to win Panic? Will they even survive the game? Panic has resulted in a number of casualties and deaths since the game was established a few years ago. How far will Heather and Dodge go to win?

I have mixed feelings about Panic. I really liked some aspects of Panic, but I also really disliked other aspects of Panic. The majority of Panic was a bit slow and just okay to read. There was nothing to write home about really. I took a slow meander through the pages, not really rushing to find out what happens next. I’m glad this is a stand-alone book because I really don’t think that I’d read a sequel.

I thought that Oliver set the scene really well. The poverty in Carp was consistently present throughout Panic both in the environment and in the characters. Oliver paints the environment as very run down: Heather lives in a trailer; Bishop lives in a house with a yard that’s filled to the brim with junk; Dodge in a house behind a diner in a particularly rough part of Carp where there are old cars abandoned on the street and lots of rubbish strewn everywhere; Only Natalie lives in a nicer part of Carp. Oliver also conveys the poverty through the characters: descriptions of the characters include crooked teeth, worn clothes, and alcohol/substance abuse. The feeling of living in a town that’s fraught with poverty and essentially forgotten by the rest of society is strong. That image helps the reader to feel the characters desperation to escape from Carp and to understand the characters desire to play Panic as it’s the only way to leave.

The only thing that bothered me was a small detail: if everyone is so poor in Carp, how do all the students at Carp high afford to pay a dollar a day while school is in session? That’s equivalent to about $180 dollars per student. There are no exceptions either. Oliver describes,

“People who refuse to pony up the case receive reminders that go from gently to persuasive: vandalized locker, shattered windows, shattered face. It’s only fair. Anyone who wants to play has a chance to win.”

This was one of the things that I really disliked about the book. Forcing people to contribute a dollar a day after emphasizing how poor everyone is just didn’t seem logical to me. When I was younger, money was incredibly tight. There is no way that I could have contributed a dollar a day, let alone both my sister and I (we were both in high school at the same time). We used to count up every penny just to buy enough food for the week. I wonder whether Oliver has any experience with being poor. I guess the people who live in Carp aren’t that poor after all, which kind of undermines the desperate need to play Panic.

The chapters where Panic is played are well written and fast-paced. I thought Oliver did a good job of choosing challenges that utilized features in the town to make the game more believable (i.e., that it was planned by two anonymous judges who are also seniors without using a lot of money). For example, jumping off a high cliff into the sea or walking along a narrow plank of wood high above the ground with no net when it’s raining buckets etc… I also thought that Oliver did a good job of conveying the risky nature to the challenges. For example, in one of the challenges, the players have to break into a drunken man’s house to steal something. At first, I thought that the challenge wasn’t that scary, but then the dogs start attacking the players and the drunken man comes running out of his house shooting a shot gun. That chapter was really strong because it showed the potential consequences of playing the game: death. It also showed that although this is a game, it isn’t a game either. The drunken man was not a player and he was mad as hell that they were in his house. Some of the challenges towards the end of the book weren’t that good though. For example, the individual challenges didn’t seem to be equally weighted (spiders vs. Russian roulette) and the final challenge was essentially playing chicken in cars (i.e., who will turn first) which is the same every year.

I disliked three additional things in relation to Panic. First, although some of the challenges were good, in that I really understood why they would make a player panic, I was never worried that Heather and Dodge would get hurt or fail to make it to the final stages of the game. Even when they came close to getting hurt or not making it through, I knew they would. I guess that the characters didn’t really seem to panic even when the challenges really should have made them panic. Second, there was too much fluff in between the challenges. The challenges brought tension and the excitement to the plot, but there was too much time in between the challenges to keep me reading quickly. The events that happen in between the challenges also weren’t that interesting. Finally, the police really didn’t seem to be doing that much to stop Panic. No one really seemed to get into trouble, despite the fact that someone dies or that some of the players end up in hospital etc… I get that it’s hard for the police because no one is talking, but surely having the police closing in would have made the game more exciting, not less?

I think the biggest problem with Panic is the lack of character development. Let’s start with Heather:  Heather enters Panic because she’s just been dumped by her boyfriend, Matt, for another girl and she’ll do anything to distract herself. I really disliked how she referred to herself as ‘a nobody’ and nothing because Matt didn’t want to be with her. For example, near to the beginning of the book Heather says:

“When Matt had dumped her, she had understood for the first time that she was a complete and total nobody.”

As the book progressed, I started to think Heather had changed. Certain events in the book lead Heather to start playing the game for herself and her sister, rather than to forget about Matt. She stops mooning over him every time he shows up at one of the challenges and actually tells him to f**k off. The problem is that about two-thirds of the way through the book, Heather says:

“Why would [spoiler] go for her, Heather? He was smart. He was leaving for college. Heather was a nobody. Nill. As in zero. That’s why Matt had dumped her too.”

This shows that Heather hasn’t grown at all. As soon as she is rejected by another boy she is back to thinking she’s nobody. I really dislike it when authors write these kinds of female characters. I feel that it sends a bad message to young-adults: that you’re worthless unless a man wants you. This is completely not the case.

Turning to the other main character, Dodge: throughout the entire of Panic, Dodge is fuelled by revenge. His sister played Panic and ended up in a wheelchair because the opposition cheated. Dodge enters Panic to seek revenge on the opposition’s younger brother. “A sister’s legs for a brother’s life.”  Dodge doesn’t grow throughout the book, despite his sister moving on with her life. Right up until the very end of the book, he is still out for revenge even after spending some time with the person he wants to kill. It would have been nice for Dodge to at least turn his focus onto the person who was actually responsible for paralyzing his sister’s legs. Although I empathized with Dodge at first, his consistent search for revenge and his anger became boring.

None of the other characters in the book ever shined. Natalie and Bishop should have considering they were in the book the most after Heather and Dodge. I honestly don’t really know Bishop and Natalie that well and I could easily forget they were even part of the story. Even Heather’s sister felt one-dimensional. She was just a child that Heather needed to protect.

Final Verdict: An okay read but not something to write home about.