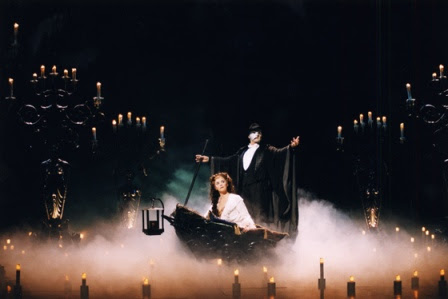 “You will curse the day you did not do, all that the Phantom asked of you.”
Phantom, Phantom of the Opera written by Andrew Lloyd Webber

As a treat for Lynne’s birthday, Frances had a trip all planned out, and only told Lynne when they were leaving. With some misdirection provided in a birthday card, it was a huge shock to Lynne when we arrived outside of the Her Majesty’s Theatre and she saw the billboards for The Phantom the Opera. It was even more of a shock when our tickets were magically upgraded from Balcony to Royal Circle (one up from the stalls, instead of the 4th level that is the balcony). Frances had already seen the show before in London, and Lynne had seen it with her family in her hometown in America. But there is something magical about being able to experience this musical in London.

For those of you who are unfamiliar with the plot, the musical is based on the novel The Phantom of the Opera by Gaston Leroux (and it is not the only musical based on this novel!). A young chorus girl, Christine, has been receiving singing instruction from an unknown teacher. When the leading soprano (Carlotta) is scared away by strange “accidents”, Christine is given the chance to shine, and she sings amazingly. In the crowd is the opera’s new patron, Raul, a childhood friend of Christine’s. He is excited to see Christine, and attempts to start a romance. However, Christine is a bit reluctant as her teacher, the “Angel of Music,” is very strict. The angel then takes her down to his lair and continues to work on her singing. Christine is curious about her teacher and steals his mask away, seeing that he is horrible disfigured. He gets angry, and she is scared, but he allows her to return above and sing again in the opera. When a stagehand tries to apprehend the Phantom, the Phantom kills the man, scaring Christine into hiding on the roof with Raul. There the young couple becomes engaged, and the Phantom has his heart broken and thus causes mayhem in the opera. Months pass, and there is no sign of the Phantom until the New Years ball, where he presents an opera he has written, and says the theatre must perform it. The scared theatre complies against their will, and Christine is terrified and does not want to sing. Raul realizes that as long as Christine performs, the Phantom will attend, and thus there will be an opportunity to catch him. The Phantom ends up killing the leading man and taking his place and sings to/with Christine. Christine rips off his mask in front of everyone, and when people move in to catch the Phantom, he drags Christine back down to his lair. There he tries to force her to marry him, and when Raul appears, the Phantom threatens Christine with Raul’s death if she will not marry the Phantom. Christine overcomes her revulsion of his twisted nature and kisses the Phantom. It is enough for the Phantom to have a change of heart and tells the two lovers to leave and forget him. When the search party finally arrives at the Phantom’s lair he has disappeared leaving only his mask behind.

It was a really amazing experience to have. It would have been prefect if we could have removed the people in front of us from the theatre. The two women, one in front of each of us, kept leaning forward, which meant we could not see. One woman spent almost the whole play leaning forward and obscuring France’s view. And there was a really tall man sitting in front of both of us, and his head blocked another portion of the view. So while the seats were much closer, we spent much of the time moving around to see the stage!

One of the best things about seeing such a large budget performance of this show was the special effects. The disaster that the Phantom promises the company should his demands be ignored was truly breathtaking. There is also a point where the Phantom shoots fire from a staff. It was real fire, and really cool! Even the Phantom’s makeup was superbly done, and when viewed up close with our binoculars, there were so many great details there!

The sets that were used were also amazing. The best was going down to the Phantom’s lair. There was a bridge that crossed the back of the stage, which was raised and lowered and tilted to give the illusion that the Phantom and Christine were making their way deeper below the Opera House! Then when they made it to the lair, they arrived by a boat, gliding through mist and candelabras. It was a breathtaking sight, and one we knew we had to use to sum up this experience.

As far as the actors went, it was really well done. Christine and Raul had really good voices and acted well. Phantom was able to hit some of the very important notes, but seemed to struggle a little with the quieter and slower songs. It was a shame that he did not seem to live up to the other two. Raul was actually the surprising one, as his voice was what we imagined for the Phantom. The notes that Christine hit at the end of “Phantom of the Opera” song were breathtaking in their brilliance!

As for the other actors and background characters, they were a mixed bag. The two opera managers were very well done. Carlotta was also done well and she could sing well, but was able to bring in the more unsavory characteristics of her character (even if at times she was a little shouty…). Madame Giry was perfectly cast and acted. The one that was probably the biggest disappointment was Meg. Her voice was by far the weakest of the whole cast, and at times she was rather annoying on stage. Luckily, she is not actually that big of a character.

These actors and parts may change in other performances as we attended a matinee showing. But I think the one thing we would have changed of the whole experience was the other audience members. There were not only the people in front of us who had no cares for the people behind them, but there were other loud people in the audience. There was a young boy that had to be taken out to quiet him. But the most annoying were people opening noisy wrappers in the few quiet moments of the performance (all they had to do was wait 10 seconds, and no one would have known). But sadly there is no way to control the other people around you. You just have to make the best of the situation.

Final Verdict: Hop in a plane, train or automobile to get here. And possibly take a booster seat to see around the other people!