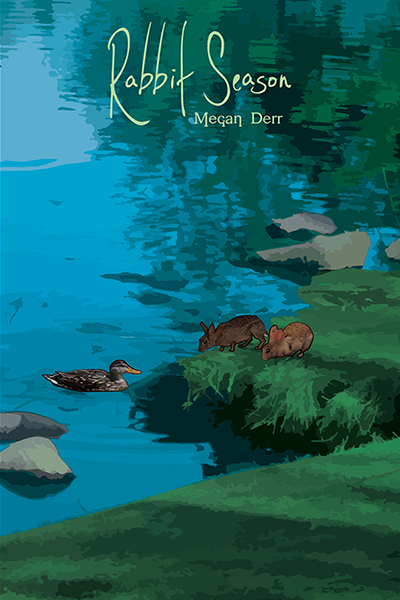 “He squeaked in dismay when he saw he was not wrong, not even a little. The Hot Twins were sitting at the breakfast nook with his dad. Oh, god, what the hell were they doing there? At nine in the morning? While his hair was standing on end and he was wearing Spiderman pyjama pants?”
Sidney from Rabbit Season by Megan Derr

Rabbit Season is the story of Sidney, a duck shape shifter, who has grown up in the years since he last saw the twin rabbit shifters, Brook and Colby. Unfortunately, his crush on them has not lessened in the intervening years, a crush that he deems hopeless as he knows that Brook and Colby (despite societal norms) are together. However, they turn up at his dads’ house after their own home was attacked, an attacked in response to their mother’s shifter activism. It is decided that the twins will be staying with Sidney and his dads until the culprits are caught. Unknown to Sidney, the twins have been waiting for the younger duck shifter to grow up, and they may be ready to finally make their move.

As may be apparent to some, I am a big fan of Less than Three Press, and specifically Megan Derr. So when I saw one or her books on NetGalley, I knew I had to read it. Unlike many of the books we review on this blog, this is certainly a book for adults as there are several sex scenes. It was a very quick read, which I finished in a single sitting.

The most impressive thing about the novella is how much is packed in it. In so few pages Derr is able to create a whole, complex world (which I did not realize she had already explored in the first Lost Shifters book, Backwoods Asylum). It was fascinating to learn about all the different types of shifters, how they interacted with their own kind and other shifters, and the politics of this world.

Even more impressive than the world were all the characters. By the end of the book the main three characters, and a handful of secondary characters were all more fleshed out than a single character in the first 100 pages of Twilight! Not only are the characters complex, with bold and shy moments, but the interactions between characters are fun. One of Derr’s strengths in all her books is the ability to make wonderful snarky exchanges, and there was plenty of that in Rabbit Season, mostly from Sidney’s dads! While Sidney and his dads are not a conventional family, the love they share is very clear without ever coming across as sappy. Even better is how in love his dads are, but they are also open with how difficult their relationship has been due to outside forces (something they see being a similar problem for Sidney and the twins).

The romance between Sidney and the twins, like the rest of the story, was surprisingly nuanced. While it is obvious Sidney and the twins will get together, there are real moments of doubt on Sidney’s part. These came across as realistic, and very human. Best of all the romance does not get in the way of the plot, and there are moments when the characters recognize that certain things are more important than an immediate make out session!

I would recommend this for anyone that needs a nice little break. While it can be a bit of a guilty pleasure read, there is plenty in the story to keep the interest of anyone who is not a complete romance fan.

Final Verdict: A fun novella that packs a lot in such a short space.