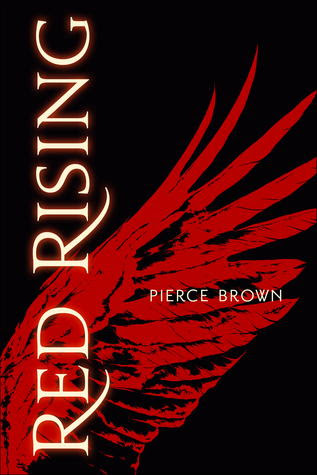 When I received an email from NetGalley featuring the top picks for the month, I saw Red Rising by Pierce Brown. The cover and title didn’t give much away, but the description of the book read, “Pierce Brown’s relentlessly entertaining debut channels the excitement of The Hunger Games by Suzanne Collins and Ender’s Game by Orson Scott Card”. I was instantly intrigued because I loved The Hunger Games, and while I haven’t yet read Ender’s Games, I have heard good things. Having said that, I wasn’t sure whether Red Rising could live up to the hype.

Boy, were my doubts unfounded. I would go as far as to say Red Rising is BETTER than The Hunger Games! I don’t say that lightly but Red Rising is like The Hunger Games times 10. Red Rising is imaginative and original, the characters have such depth and there’s a moral to the story, something most young adult fiction lacks. I’m going to start with a book summary, but it only really covers the first few chapters because anything more would spoil the story. There is much, much more to this book than the summary below.

Darrow is a Red. Darrow is a Helldiver mining for Helium 3 in the depths of Mars. Darrow is a pioneer, transforming Mars for the survival of man-kind. Darrow discovers that he is actually a slave. People have been living on Mars for generations, and the Reds now work to transform other planets. Outraged, Darrow joins a resistance group and fronts a radical plan to take down the system that has enslaved the Reds for generations. To enact the plan, Darrow must take down his enemies from the inside; he must become one of them.

This book is action-packed. It’s violent; there’s murder and mutilation, described in detail, and references to rape. It goes a step further than The Hunger Games, as Katniss only actually kills two people and she manages to avoid most of the violence by hiding out. In Red Rising, Darrow gets up close and personal and because the book is written in present tense, the reader is right there with the character when he hurts others or he is hurt by others. Plus, Pierce Brown doesn’t hold anything back. He describes the things Darrow and the other characters in the book have to do in detail. At first, I was left unnerved, but the graphic descriptions meant I felt everything along with the character; the rage, the sorrow, and the guilt. For example, at one point, I felt outrage at one character’s (Titus) actions and at the time, I agreed with how Darrow punished Titus. Later, though, when a friend tells Darrow it wasn’t right, Darrow realizes that he became like Titus. I shared the guilt Darrow felt and I somehow felt complicit in the deed. I think that it’s a testament to Pierce Brown’s writing ability that he can draw the reader so far into the story. I actually had trouble sleeping that night because my mind was still in the book. When a book invades your dreams, you know it’s outstanding.

I’m not usually a sci-fi fan, but I loved the world that Brown created. I feel like I only learned a fraction of what this world is like and what the people are like. I imagine Brown could write book after book about different characters in the world and each one would be fascinating. I will admit that when I first started the book, I found the jargon difficult to follow. Because the book is sci-fi, this is a completely different world from our own. For example, people belong to a color. Darrow is a red, which means he has rusty, red hair and he is a miner. The Pinks are effectively prostitutes. The Violets are the artists. The Browns are the servants. The Yellows are the doctors (I think). The Whites are like the business people (quality control; again, I think – there is no index listing what the colors are). The Greys and the Obsidians are the soldiers. The Pixies and Bronzes are the names of the duller shades of Gold. The Golds are all the elite color who rule over all other colors. Hopefully, you’re getting the point. It’s an entirely different world and figuring out the hierarchy of the colors and their unique looks was tricky at first. In addition, the language is different. The cursing includes phrases like “bloodydamn” or “slag” or “goodman” depending on which color is speaking. I settled in pretty quickly, but I found the first few chapters frustrating and almost gave up reading. There was something about Darrow that made me persist and I am so glad that I did.

In terms of the characters, I felt they all had depth. I really liked Darrow because he was believable and well written. Too often a young male protagonist is written as feminine or a stereotypical male. Darrow was just your average sixteen year-old male. I also had a hard time disliking characters for long because Pierce Brown really played with the readers emotions. So often, I would start to dislike a character, then something would happen and I’d really like them (although sometimes it went the other way). I think this is because, almost always, something happened to redeem each character. For example, I hated Titus, a Gold in the Mars house, at first. Then, something happened (I won’t explain what because it would spoil the plot) which explained explain why Titus is the way he is, and I didn’t hate him anymore. I don’t condone the atrocities that he committed, but part of me sympathized with him. Then there are the other Golds. After Darrow realizes he is a slave to the other colors, he hates them and so does the reader. Yet he quickly learns that the Golds don’t exactly have it easier either. Almost everyone is redeemable.

Aside from Darrow, one of my favorite characters was Servo. I really liked Servo’s attitude. He is quintessentially an underdog throughout the entire book and the other Golds underestimate him. Yet, time and again, he comes out on top. In such a dark and violent book, Servo brought a necessary lightness to the book because the things he did or said were rather comical. I rooted for Servo and the howlers (Servo’s band of Gold students who wear a wolf skin and howl when they are victorious).

I also liked how Pierce Brown didn’t feel the need to include a romance, particularly a love triangle. Although a romance of sorts occurred, it definitely took a back seat to the other plot points that occur in the book. I also think that the romance was appropriate given the situation and the age of the characters. There were no declarations of everlasting love or references to soul mates. It was a typical relationship between two sixteen year olds. Things also develop slowly rather than out of the blue, and almost against the characters’ wishes.

Finally, I’d just like to comment on the appropriate audience considering the level of violence and language in this book. I feel it is appropriate for the middle/older end of young adult fiction, so 15/16 upwards, perhaps slightly younger. That being said, I don’t think it has an upper limit. I think adults will love this book too.

Final Verdict: Pre-order this book now. You won’t regret it. It’s going to be bigger than The Hunger Games.