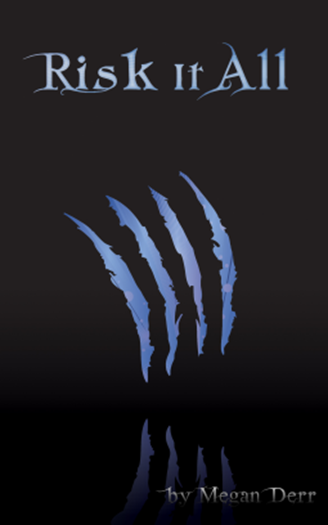 “If it was a trap…He’d already killed one Alpha, three Candidates, and more than a dozen of the wolves that had been trying to hunt him down. That didn’t count all the death matches in the pits that he’d been forced into. Alpha or not, Kipling could best him, and it wasn’t like he’d let the man take him somewhere he and a bunch of friends could jump on Kipling. Lunch and a f*** were a risk he could afford to take.”
Risk It All by Megan Derr

I have been a fan of Megan Derr for almost a decade now; from before she and several others started Less Than Three press. It was sad for me when she took down many of her stories (although completely understandable), so I am always very happy when she re-works one of those older stories and publishes it. Risk It All, is one of the stories that I remember from the old times (I loved her dragons and pit fighting world stories), and I was very excited to see what had been changed. I will do my best to focus this review only on this published version of the story.

Risk it All follows Kipling (Kip) as he is on the run from having just killed his pack’s Alpha and several other high ranking werewolves. He doesn’t regret what he had to do, but he has to try and keep one step ahead of the rest of the pack. This paired with the fact that he has spent the last decade as a roughskin, a fighter in the often times deadly fighting pits where rich men bet on his life, makes it hard for Kip to trust Tori, the obvious wealthy man that invites him for lunch. After giving in to temptation he spends a night with Tori, but slips away to an abandoned cabin to try and keep Tori from becoming a target as well. However, Kip clearly underestimated Tori, a man who not only owns a dragon but twin dragons, something he has never heard of before. Could this odd trio offer him the pack and companionship he so desperately yearns for? But what happens if his old pack finds him?

I am happy to report that I still really like this story, and the world that it is set in (which I didn’t realize until after I read it is the 7th book in the Dance with the Devil universe). It was a quick read, which I finished in one sitting, and found hard to put down, even for a cup of chai. Having said all that, I will admit it is not as polished as some of Derr’s other works. I found that the plot was not as developed as Rabbit Season (a story of comparable length by Derr), and there are little bits that just did not feel fully developed. Mostly it was a bit weird that while it is hinted at why Kip committed his murders, it is never explicitly said in this novel why he did it. It would have really helped to know for sure why Kip felt it so necessary, it feels very much like there was something specific, but we never find out. This paired with the fact that the plot is very much in the background to the romance makes it feel just that little bit unpolished.

However, all that said, I still really liked the story and will be re-reading it often. The strength of the story comes from Kip and Tori. Kip is a wonderful mix of strength and vulnerability, forcefulness and submission, and fierce and adorable. His past as a brutal pit fighter is with him, and the scars it left are clearly not just on his body. However, his need to be loved and wanted makes it easy to forget that he was undefeated in his fights for a reason. The final showdown in the book is very well written, and drives home these opposing forces that work so well within Kip.

Tori, on the other hand seems more open, but actually is not as clear what his motives are. He is still an interesting character, especially when his dragons are brought into things. The hints about Tori’s family lineage and the true history of the dragons is intriguing, and I really hope Derr continues with these ideas in some future books (preferably if she could bring back her stories about Tori’s brothers!). The dragons themselves were not in that much of the story, but their presence in those scenes is felt. Even when they are in their human forms they are not very human, especially when compared to Kip. This was a great contrast, and again I hope to see more of this in the future.

Overall, Risk It All, is a fun read set in an interesting universe. While the plot is not as developed as some stories, it is still worth a read. For old fans of Derr’s it is a great expansion of the original story, and some of her snippets from that world were also reworked into the main story. It should also be noted that this is an adult book, and it includes elements (polyamory and incest) that will not be for everyone, but if you are willing to give it a shot it is worth it. I hope that we will be seeing more from the dragons, the pit fighting, and this world in the future. Along with more of Derr’s old stories re-worked!

Final Verdict: While not as polished as some of Derr’s stories, it is a fun, guilty read.