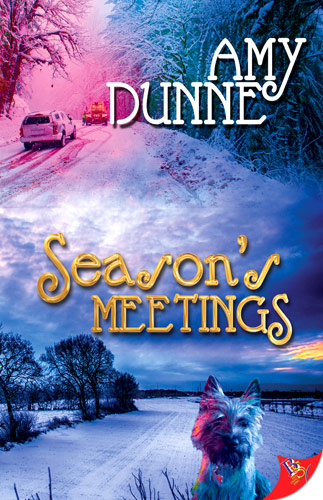 “This is your first Christmas without Granny Birch, I know you probably want to hide, pretend Christmas doesn’t exist, spend time drinking it away and reading books, but we’re not going to let that happen.”
Beth in Season’s Meetings by Amy Dunne

When I attended the Bold Strokes Book Festival in 2014 in Nottingham, England, author Amy Dunne read an excerpt from Season’s Meetings. It was a fun and playful scene from her upcoming book. Between the excerpt and how much I enjoyed Dunne’s previous novel, Secret Lies, I was very excited when my NetGalley request was granted to read Season’s Meetings. If you want to read an excerpt you can find one here.

Season’s Meetings is set during the Christmas holidays. Catherine Birch is a successful businesswoman whose personal life has been in tatters since her breakup a couple of years prior. She hates Christmas due to the loss of her parents near Christmas when she was a child, and it is even worse this year as her last family member, Granny Birch, passed away earlier in the year. Her good friend, Beth, forces Catherine to agree to visit for the holidays to her home in Scotland. Last minute work problems forces Catherine to accept alternative travel plans, and catch a ride with Holly Daniels (the cousin of Beth’s wife). While the younger Holly is very different from Catherine, they both feel the initial spark of attraction. However, they have a long car trip, impending severe weather, and a holiday that they feel very different about, to survive first. Can a romance bloom when so much is stacked against it?

I really loved this book. The main thing that I took away from it was how real the characters, especially Catherine, were. The characters were complex and reacted in such relatable ways to the situations that they found themselves in. I read the whole book in one day, and once I started it was very hard to put down. Dunne’s writing style really helps to draw the reader in. From really poignant observations about life (e.g. “Flirting was practically a different language to her and one subject she always flunked out of.”) to wonderful descriptions of the characters and scenes, it made reading fun.

When I started the book I thought Catherine was gearing up to be the “Scrooge” of the story, the one who would have to be completely changed. Instead, after the first chapter you realize that she is a complex and currently damaged person. This was very well done and kept me invested in the story. Seeing her in the first chapter play up her “bitch” role to her employees, but then in the next realizing that she could not ask them to do what the higher ups wanted, and that she did the work for them (and without ever telling them), really raised her up in my eyes. The devotion that Eve (her personal assistant) and her friend Beth still have to her, even though she has been in a rough patch, shows that she has a heart and softer side, but has buried it. Catherine’s volunteering at the library, and the discussions about her tough childhood really just helped cement the image of a broken woman. However, even in that depth of despair she wants to become better, and that helped make things interesting. Tied with that was the way she dealt with her fears and stress, and those were equally as fascinating to see. Also the small moments of her sense of humor were great (like buying a drum set for her goddaughter to punish her friend for making Catherine visit was genius). As you can probably tell I really clicked with her as a character.

Holly was a nice foil to Catherine, yet even by the end she was still a bit more of an enigma. Part of this is due to the storytelling revolving around Catherine, but it is also probably part of Holly as a character. She appears rather open about a lot of things, but then there is even more that she never discusses. So while Holly pushes Catherine for information about her previous breakup, Holly never even tells Catherine the name of her previous girlfriend. However, in the end Holly was a good compliment to Catherine, and really pushes her to rediscover the good in life and question her status quo.

The stand out star in the novel though has to be little Kimmy, the Cairn terrier (modeled after Dunn’s own terrier of the same name). She is a main character in the love story, but unlike many other novels, she never becomes more than just a dog. The best part is how accurately Dunne captured owning a pet; from the joys and fun parts (cuddles), to the odd quirks in the pets (laying down, chest down with legs splayed like frog legs), to the not so fun parts (like dog farts).

The romance was interesting, and overall was really aided by the characters themselves. There is an initial spark between the two women, but there is resistance to anything more; which felt really believable. Too often after an initial spark everything moves at super speed, and it was nice to see the characters reacting more sedately. The moments where they sit down and talk about what is happening were realistically awkward, but touching in that same realness. By the end you are rooting for them, even when they are making mistakes.

My one regret with this book was that I did not have the chance to read it over the actual Christmas season. However, it was still enjoyable, and will be at any time of year. But listening to Christmas music, with a warm cup of something and snuggling under a warm blanket was a great way to enjoy the story. I know that come Christmas time this year I will be re-reading this book!

Final Verdict: Fun holiday romance book that is perfect with a cup of tea and curling up on the couch.

One thought on “Season’s Meetings”