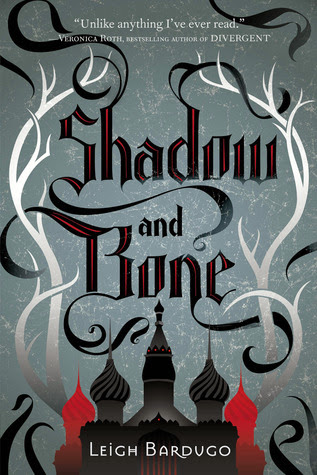 “This was his soul made flesh, the truth of him laid bare in the blazing sun, shorn of mystery and shadow. This was the truth behind the handsome face and the miraculous powers, the truth that was the dead and empty space between the stars, a wasteland peopled by frightened monsters.”
Alina Starkov, Shadow and Bone by Leigh Bardugo

Shadow and Bone is the first book in a trilogy called Grisha. The trilogy tells Alina Starkov’s story. As a young child, Alina is left alone in the world when her parents are killed during the Border Wars in a place called Ravka. She is sent to live in Duke Keramzin’s estate, which has been converted into a orphanage, to be educated. She forms a close bond with a boy named Malyen Oretsev (Mal). When they are eight years old, they are visited by three mysterious people known as Grisha (people who have magical powers), who test them for hidden abilities but find nothing. The book skips forward in time. Alina and Mal both work in a military regiment called the First Army. Mal has flourished as he has grown up. He is a very talented tracker and is popular with the other members of his regiment and the ladies. Alina is rather mouse-like and sickly looking (e.g., bags under her eyes and very thin) and works as a mapmaker. As Mal and Alina travel across the Shadow Fold (a strip of darkness) they are attacked by the Vulcra (monsters who who fest of human flesh). Almost half of the army are killed by the Vulcra and it doesn’t look good for Alina or Mal. As a Vulcra swoops down to finish off Mal, Alina instinctively protects him. A brilliantly bright light extinguishes the darkness and the Volcra flee. The survivors of the attack are questioned by the Darkling, the leader of the Grisha, and he determines that Alina is a Sun Summoner, a rare kind of Grisha. The Darkling takes Alina to Os Alta where the King lives to train her and protect her from Ravka’s enemies. Alina’s power could be the key to eliminating the Shadow Fold permanently, allowing Ravka to access the harbour and trade. Will Alina learn to use her power and will it be enough?

I found the beginning of the book a little slow, up until Alina uses her latent magical powers for the first time. I understand why the first few chapters are necessary because it gives the reader a glimpse at Alina and Mal’s history and who they are before everything changes. In particular, the reader learns that Alina is secretly in love with Mal and has been for some time, and what the Shadow Fold is. Both of these become becomes important later in the book. I found that Bardugo’s descriptions of the Shadow Fold and the Vulcra created a really vivid picture in my mind, making the scene where the Vulcra attack pretty unnerving.

Once Alina uses her ability to draw on sunlight and traveled to the Palace, the pace of the book picked up and the story became more interesting overall. I liked the parts where Alina learns to use her ability to draw on sunlight and discovers what her limitations are. I thought that the reason for the mental block that stopped her calling her own power to the surface was interesting and I liked her more for it. I do wish that there had been more of the book devoted to Alina using her power. I liked that it took time for Alina to control her power because that seemed realistic, but as this is a fantasy book, I wanted more. I also enjoyed learning about the different types of Grisha (see below) and the few scenes where the Grisha use their powers were fascinating. I think that more time could have been spent showing the reader what the different types of Grisha could do, rather than telling the reader what each Grisha could do each time a Grisha wearing a different coloured of Kaftan appeared. As a result, only the Darkling and Genya felt like real 3D characters. The others were pretty forgettable.

Although I found that the pace picked up once Alina arrived at the Palace and the plot became more interesting overall, I did feel there was too much fluff. First, there was too much high-school drama, for me. In particular, Zoya (a Grisha who wears a blue Kaftan) is jealous of Alina because the Darkling favours her. I think that the authors decision to have the two characters say spiteful things about each other, gossip, and finally scrummage in the gym was a bad decision. Considering the power that both Zoya and Alina hold, it would have been more more interesting if they’d battled it out at some point. It just all felt a little childish given the tone of the rest of the book. Plus, after a while, Zoya just drops out of the story entirely, so I’m not sure what the point of her character was.

Second, I found that there was too much emphasis placed on looks. I thought that it was a nice idea for Alina to become more healthy as she uses her power rather than suppressing it (e.g., bags under eyes disappearing, gaining weight etc…). What I found annoying was Alina’s constant whining that she can’t possibly be a Grisha because she isn’t beautiful. That kind of grated on me. I didn’t like the fact that Alina thought she wasn’t anything special because she wasn’t beautiful. It would have been better if Alina had thought she couldn’t be Grisha because she’d been tested as a child. And, of course, as with most young adult fiction, while Alina doesn’t think she’s beautiful, she secretly really is because everyone loves her! Sigh. It’s just silly. Where are the Jane Eyre’s of the young adult fiction? (FYI, Jane Eyre is a character in a novel written by Charlotte Bronte. She is plain, but smart and funny, and she gets the man because of who she is not because of what she looks like). I also disliked the fact that one of the Grisha (Genya) was sent to make Alina look presentable by smoothing out her skin and removing the bags under her eyes so that she could meet the King. I don’t have perfect skin and I really disliked the fact that one of the reasons Alina was not considered beautiful was because of poor skin. Alina mentions Genya’s beauty to often too. She’s just so out-of-this-world beautiful, she might as well be an alien or something stupid like that.

I liked Alina’s character on the whole because she had some strong moments. For example, she throws herself over Mal to protect him from a human flesh eating monster at the beginning of the book! Plus, at the end of the book, I felt she finally stepped up. I won’t say what she does because that would spoil a lot. The problem is that everything in between those two moments was really pretty weak. For example, near the beginning, she is attacked by on of Rakva’s enemies. She does little to fight the man off, and as soon as the Darkling arrives, she shouts to let him know where she is. I wouldn’t have minded if she’d at least really tried to fight him off. Throughout the middle of the book, she wallows too much– she can’t control her ability (yet she doesn’t really try very hard to control it), people don’t like her (yet she doesn’t really try very hard to get to know them), and Mal won’t write back to her (if he hasn’t realised she loves him by now, at least try to move on). While I like the idea that a character can be both weak and strong at times, I felt there wasn’t enough of a balance.

I usually hate love triangles, but the love triangle in Shadow and Bone actually worked. Mal is so different to the Darkling, the opposite even. It was obvious from the beginning that Mal would be one of Alina’s love interest. Otherwise, why make such a point of Alina being secretly in love with Mal at the beginning of the book. What I liked though, was that Mal doesn’t realise that he has feelings for Alina too because she becomes beautiful, he realises once she is taken away. He didn’t know what he had until it was gone, as they say. I liked that Mal admitted he’d been stupid. I did feel that there were a few too soppy moments, where Mal or Alina would say something that was overly romantic. I think most people would swoon over this. I’m just not comfortable with too much lovey dovey crap. I can see why Bardugo chose to play Mal and Alina’s relationship like that though. Mal and Alina’s love contrasted starkly with Alina and the Darkling’s chemistry.

I liked the plot twist that happened about half-way through the book. One moment everything was fine and dandy, and the next, everything flipped upside down and back to front. What I thought was good was bad, and what I thought was bad was good. I didn’t see it coming either. I really probably should have, but I like that I didn’t. The twist made for a better antagonist. I started off liking the antagonist and then the twist happened and the surprise made me dislike the antagonist to a greater extent that I would if I’d know the antagonist was an antagonist from the beginning. Phew! What a mouthful! Hopefully you understand my point without knowing which character I’m talking about. What I liked most was the greyness that Bardugo brought to the antagonist’s character. There were moments where I wondered if things were less straight forward. I am looking forward to how this plays out in the next book, Siege and Storm (Grisha 2). I am expecting some kind of back story that might make the antagonist redeemable in some way.

Final Verdict: A fast read with characters that have great chemistry. Perhaps a little too light on the fantasy content though.