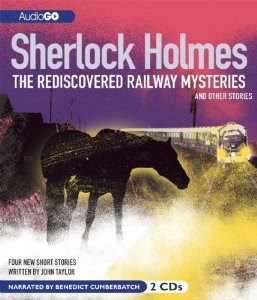 “Mediocrity knows nothing higher than itself; but talent instantly recognizes genius.”
The Valley of Fear by Arthur Conan Doyle

I was so excited to find that Benedict Cumberbatch had done the reading for an audio-book version of Sherlock Holmes. However, I was a little sad to realize that it is not one of Sir Arthur Conan Doyle’s novels, but instead a new author who was attempting to write as the characters. I went and found a copy of this and started listening. I was cautiously optimistic. Honestly, how bad could it be, I thought!

There are four separate mysteries that are supposedly rediscovered by Dr. John Watson in one of his old trunks, and being inspired he has decided to share them with us now.  The four stories are titled; An Inscrutable Masquerade, The Trinity Vicarage, The Conundrum of Coach 13 Larceny, and The 10:59 Assassin. All the stories appear to be set before Watson gets married and moves out of 221 B Baker Street.

The Inscrutable Masquerade is a case where Sherlock is trying to help the police gather enough evidence to convict a man they know committed murder. The police have had to release the convict, and now Sherlock is running top secret experiments to gain the evidence they need. In order to protect him, Holmes asks Watson to stay inside 221 B Baker Street, and not open the door or go out, but surly there can be no bad consequences of Watson letting an old friend in?

The Trinity Vicarage is a more straight forward mystery. A bishop, who has meet Holmes before, arrives in London to request help with a very strange robbery. The local vicar had been keeping some cash, after finding and selling an old relic, in the crypt of the church. A strange figure in a hat has broken in and taken the money, and in the process left whitewash footprints across a field as the vicar chased him off. It is now up to Holmes to figure out who stole the money and how they disappeared.

The Conundrum of Coach 13 Larceny starts with a flustered American business man arriving to employ Holmes (who has been grumpy from a lack of cases). The American had been paid to provide 5 million in gold bullion to the British government. With very careful planning he had it loaded on a train, the boxes could only go in through the door (not out a window), the doors locked from the outside, and a guard was on duty. But, when the train arrives in London, there is no gold, and only a guard that fell asleep. Can Holmes solve the case and find the 5 million?

In The 10:59 Assassin the story of Holmes being asked to help a pub owner who helped put a man in prison. The pub owner’s son has been accused of murdering the son of the man the pub owner helped convict. At the time of the murder the pub owner’s son was on a train to buy a suit for his wedding, but that doesn’t keep the local police from locking him up. Can Holmes prove the soon to be groom is innocent, or is the pub owner’s faith in his son misplaced.

I have very mixed feelings about the audiobook. I found that when looking at the original Doyle stories of Holmes there was no comparison. These mysteries were too easy. The first two I solved easily and the last two, I pretty much had the answer, and defiantly had the person who committed the crime. However, that being said, it was nice to see a bit more of Holmes and Watson in the Victorian era.

If it had not been Cumberbatch reading it to me I might not have made it past the first mystery. I found that the first one was the weakest story of the four. It was obvious what had happened and worse yet was that Watson (a medically trained doctor) was completely clueless. I really dislike a trope that some people use in Sherlock Holmes stories of a stupid Watson. Instead Watson should be a very intelligent man, who is still completely overshadowed Holmes. I can’t really say if Watson is less dense in the later stories as he plays a much smaller part in these stories than he does in the first.

As far as Cumberbatch’s voice, I think he is really able to bring Holmes alive for me. Not only that, but he does a very good job doing all the different voices, making it easy to tell who is speaking. This is no easy feat, and I have listened to some people that cannot do this. One of my favorite bits of the audio-book was listening to Cumberbatch attempt an American accent. While it is good at first, it slips a bit as the story progresses, and actually I loved this. It helps me understand what Americans who attempt a “British” accent sound like to a British person.

To be honest, I probably would listen to Cumberbatch read a phonebook (although I really recommend him reading poetry), so having it be a Sherlock Holmes mystery, no matter the caliber, is a treat. The stories are enjoyable, if you can get past the first one. For a morning commute, it is not a bad way to pass the time.

Final Verdict: Too easy for hardcore Sherlock Holmes fans, but in the end, a good way to spend the morning commute.

2 thoughts on “Sherlock Holmes: The Rediscovered Railway Mysteries: and Other Stories”