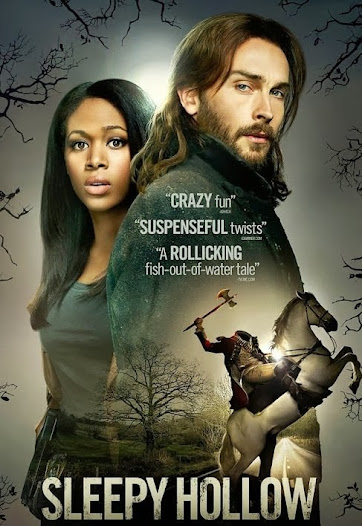 “Polygraph Technician: “Tell me about the Horseman. Would you admit cutting off his head, yes or no?”
Ichabod Crane: “No. First I shot him, then he rose back up. Beheading him seemed the next logical step.””
Sleepy Hollow (2013)

You can see the promo for the TV series below:

This has to be the best TV series to be released in 2013, hands down. While the TV series is based on a classic short story, The Legend of Sleepy Hollow, by Washington Irving, the writers have added many new twists and turns so that it feels like an entirely new different story. Although there is an overarching plot to Season 1 of Sleepy Hollow, each episode also has its own mini-story, with a supernatural creature or a supernatural problem for Abbie and Ichabod to fight. That makes every episode interesting in its own right and would allow a viewer to pick up mid-season if they missed the start. This is impossible for so many TV series. As a result, I usually wait until the series appears on re-runs, if I remember that is. Using mini-stories for each episode has been very successful for TV series such as Supernatural, Charmed, and Grim.

A large reason why Sleepy Hollow is so successful is the random mix of the supernatural including time travel, religion (Horsemen of the Apocalypse, Witnesses), witches, demons, along with conspiracies, comedy, and romance. There’s something for everyone! Everything is just so bizarre, yet it works. For example, the people helping Abbie include a time traveler from the revolution, a dead man, a mental patient, and the head of police.

The characters in Sleepy Hollow are very well done. Although all of the actors were relatively unknown before Sleepy Hollow, you woudn’t tell based on their acting ability. I have to say that it’s also really nice to have some ethnic diversity in the cast. In so many TV series and movies the actors are predominantly White. Yet in Sleepy Hollow, three of the main characters are Black. Hopefully, more TV shows and movies will increase the ethnic diversity in their casts so that WhiteWashing can become a problem of the past (see http://stopwhitewashing.tumblr.com/about and http://www.complex.com/pop-culture/2013/03/25-minority-characters-that-hollywood-whitewashed).

The chemistry between Abbie and Ichabod is the main reason why Sleepy Hollow works so well. I don’t mean chemistry as in romantic chemistry. Ichabod was married to a witch named Katrina when he was alive, and Katrina is alive in some form or another throughout the series. Abbie and Ichabod’s chemistry is more of a brother-sister-type chemistry. Both characters are rather sarcastic and the banter that passes between them creates much of the humor throughout the season. For example, in the first episode, this is one of the first conversations that occurs between Abbie and Ichabod:

Ichabod is also hilarious on his though. Some of the funniest moments in the TV series occur when Ichabod is trying to adjust to modern-day living. Here are two of my favourite moments:

Some of the other demons that crop up are also creepy as hell. For example:

The Sandman (Episode 3; Source: http://worldofwonder.net/). The creepiest demon in the season!

Coming Soon: for each episode, there will be the episode promo, a synopsis, and my thoughts on the best bits from the episode. These will include spoilers, so only click on the episodes if you don’t mind spoilers or have already seen the episodes!