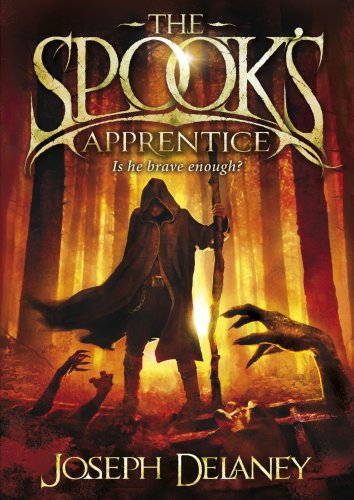 “So there’s only you left now, son. You’re the last chance. The last hope. Someone has to do it. Someone has to stand against the dark. And you’re the only one who can.”
Mam in The Spook’s Apprentice by Joseph Delaney

I was completely unaware of The Wardstone Chronicles until I ran across it as the source material for a movie that is coming out, The Seventh Son. As the movie is set to star Ben Barnes, Jeff Bridges, and Julianne Moore, I know I will be seeing it, so I thought I should check out the book. When I read the description, I had a feeling I would like this book, and after I picked it up from the library I finished it in just a couple of days! In case there is some confusion, this book as a UK and a US title, in the UK it is Spook’s Apprentice, but in the US it is, The Last Apprentice: Revenge of the Witch.

Tom Ward is the seventh son of a seventh son, and he needs to find an apprenticeship as he cannot inherit the family farm. His mother convinces the Spook to take him on as an apprentice because only a seventh son of a seventh son can become one. Spooks help the land fight off creatures from the dark, but Spooks are themselves feared and not trusted. Tom has to learn fast, especially when he finds out that there have been many apprentices before him but some of them are now dead and none have become a Spook. Just when he seems to be getting the hang of things, he meets a girl named Alice. Things start to go badly, especially when the Spook is away. What can a new apprentice do in the face of a truly evil witch?

While this book is listed as a children’s book, and is a little easier to read than some other YA books, it is not really a children’s book. I will talk about some of the reasons I feel this way below, but I think that this classification does a disservice to the novel, and to potential readers. All that being said I loved this book! It was a quick read and easy, but still interesting.

Most of you won’t know this, but I received an A+ at university in Witchcraft (it was actually a sociology course that studied the function witchcraft and accusations of witchcraft served in the community). This means I do know a little of the historical context of witches. Delaney does an amazing job mixing in references to the history of witches. The ones that I was able to notice included Malkin, another word for cat, the long time familiars of witches, the most famous being Grimalkin one of the familiars in Macbeth. Pendle, which is the land of the witches, presumably named after the infamous Pendle Witches case (which also involved a Malkin Tower). In that case, two of the accused are named Elizabeth, and another two Alice (Alice Nutter being the one I recognized). Bony Lizzie could also be related to Lizzie Borden, who was thought to have murdered her parents with a hatchet in 1892. There are probably more little things that Delaney included that I couldn’t catch, but I loved these little references.

I really liked the characterization of Tom. He actually feels like a boy in the writing, instead of being too old. He is scared of things, is not absolutely amazing, and makes mistakes. However, he is brave, and realizes he has to fix things when he makes a mistake. I feel that he is a good role model for others, and someone that young readers can identify with.

My favorite character was Alice. I love not knowing if she is really good or really evil. I love that even the other characters do not know which way she will turn, or if she will just remain a neutral entity. She feels like a realistic person, one who is not just in the story to assist Tom, but she has her own part to play outside his destiny.

One word of caution about this book is that some parts are a bit gruesome. Whoever reads this should probably not be prone to nightmares or an over active imagination. The descriptions of what the witches do to children and how Billy Bradly (the previous apprentice) died are a bit gross. I loved it, and I think many young boys will also love it!

I think this is a great start to a series, and can’t wait to read the rest of the series! I’m also looking forward to the movie (even though I can tell some things have been changed, I think this will be for the best!).

Final Verdict: A great start to a series and a good book for boys and girls that don’t mind some more gruesome witches!