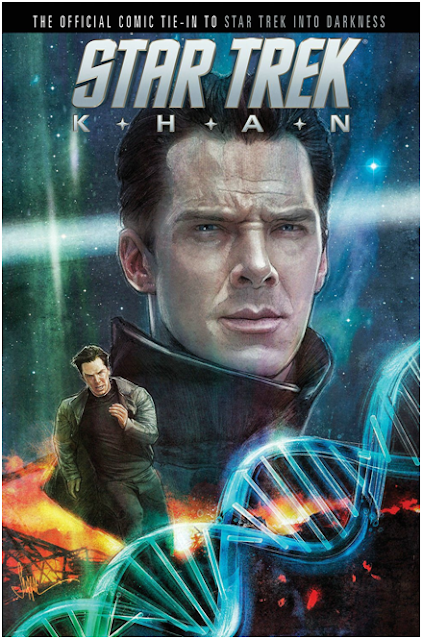 “Your Honor, I don’t think I need to repeat the charges against the defendant. The evidence of his crimes is obvious to the entire federation. What we seek today is the truth behind those crimes… He claims to be this man the 20th century tyrant known as Khan Noonien Singh. And yet the defendant looks nothing like him. So I ask the defendant directly to tell us who he really is. To tell us the truth.”
Captain James Kirk in Star Trek: Khan by Claudia Balboni and Mike Johnson

Star Trek: Khan is set in a brief unexplained bit at the end of Star Trek: Into Darkness (as it appears to be a tie –in with the movie it will not make much sense without having seen the movie). During the trial for John Harrison/Khan, Captain Kirk ask the question that everyone in Starfleet (and who saw Star Trek: Into Darkness) is asking: how is a white British man actually the Indian tyrant from centuries earlier. Khan tells his side of the story, about his rise and fall, and how he became what he is now. The trouble is this: how does anyone know if what Khan is saying is the truth? Everyone who could say otherwise is now dead. 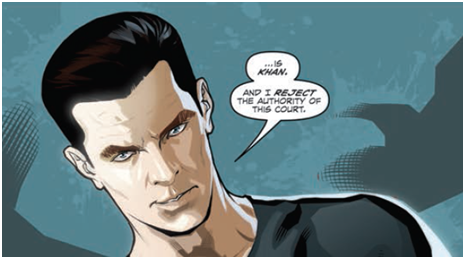 Star Trek: Khan was another nice find for me on NetGalley, and, like so often happens, I requested it before I even knew what it was about. I have to say, Star Trek: Khan was exactly what I wanted. I had so many questions about Khan after Star Trek: Into Darkness. Star Trek: Khan helped make things work in my mind. This is a very quick and enjoyable read. However, it will not make a whole lot of sense unless you have seen the movie.

The best thing about the story for me was all the questions it answered. While maybe not the best explanation about how a white British man was actually the Indian tyrant, at least there was an explanation. The second part is that we get the full history of Khan, and I loved that. I have such a weakness for villains, and especially villain’s back stories, so this was a dream come true for me.

Khan himself is nothing too different from other villains. He was naturally fierce and tough, which is why some scientist chose him for trying out the genetic manipulation to make him a super solider. Through their intervention, Khan became better than humans at almost everything. Like with so many of these stories, the scientists tried keeping control over Khan and the others like him, but when you create super-smart monsters, unfortunately they become smarter than you! I loved how brutal Khan was, and one of the notes I made while reading just simply stated, “Awww Snap, Khan is bat shit!.” He is smart, strong, and a bit crazy!

On the whole though, Khan does try to paint himself not as the bad guy, but as a leader forced into tough situations. I was already beginning to question this when Spock spoke my same sentiments at the end. However, as Kirk points out, why question it; it isn’t going to help one way or the other. As with so many stories that are written by the survivors and winners, Khan has chosen how to tell his story!

The one downside for me was that the story never really resolved as it needed to fit into the story of the movie. The other downside was that the artwork was just alright. It was close to the appearances of the actors in the movie, but nothing extraordinary. It was slightly better when they were not as constrained by the actors’ appearances, but still it is not some of my favorite artwork; it is just a bit too bland. I tend to favor very pretty artwork with tons of little details hidden in the background. This was more utilitarian art than I am used to. Also, and this is just a quibble about the ARC, the watermark on the version I was able to access was very distracting and, at times, hard to read through, but beggars can’t be choosers.

Final Verdict: A nice companion story to Star Trek: Into Darkness that answers some unanswered questions about Khan, and is a nice summer fun read.