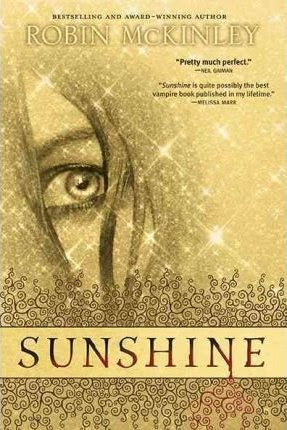 “What was new was the fact that, despite my heart doing its fight-or-flight, help-we’re-prey-and-HEY-STUPID-THAT’S-A-VAMPIRE number, I was glad to see him. Ridiculous but true. Scary but true.”
Sunshine, Sunshine, Robin McKinley

Sunshine by Robin McKinley is one of the best books about vampires that has ever been written. Hopefully, you will see why by the end of the review.

Rae Sneddon, commonly known as Sunshine, is a baker at the local coffee house. Her character is true to her name as she’s upbeat and friendly, and loves to come up with new and exciting recipes for cakes and cookies. Things are not as rosy as they seem in the alternate World that Sunshine lives in, however. The World is still trying to recover from The Voodoo Wars, where the humans and the Others, which includes mainly Vampires, but also Weres and Demons, fought for dominance. While the humans won the war, a large proportion of people died and so many parts of the World are now uninhabited. There are also ‘bad spots’ where black magic thrives, and humans know not to venture there because of the Others.

Near the beginning of the book, Sunshine escapes to the lake house to spend some time alone. The lake is close to a bad spot, but there hasn’t been any Other related trouble there in years. Maybe that’s why Sunshine doesn’t hear her kidnappers approach, or maybe it is because they are Vampires. Sunshine is put into a red gown and taken to an abandoned Mansion, where she is shackled to the wall. She is not alone in the room, and when one of the Vampires slashes her chest, she quickly realizes she is to be a hungry Vampire’s dinner.

When the sun rises and Sunshine is still alive, she realises there is something different about the Vampire, whose name is Constantine. He too is prisoner and now needs her help to survive the day. An unlikely alliance is formed between them. How will Sunshine keep Constantine safe from the sun? How will they escape their captors, and if they do, what will the ramifications be? Finally, and perhaps most importantly, what are the consequences of forming an alliance with a vampire? These are all questions answered in the rest of the book, so you’ll have to read it to find out.

I love Robin McKinley’s vision of what Vampires are like. They are traditional, in terms of their appetite for human blood, and how dangerous they are, but McKinley also puts a modern twist on their appearance. For example, Sunshine describes Constantine as having “eyes [that are] a kind of gray-green, like stagnant bog water, and…skin…the colour of old mushrooms…overall he looked…spidery. Predatory. Alien. Nothing human except that he was more or less the right shape”. This is how Vampires should look, they are dead after all. They should definitely not be eternally young teenagers that look like models or Gods! Plus, the romance of sorts that grows between Sunshine and Constantine is difficult. Sunshine has to deal with Constantine’s looks making her want to throw up, and how disgusting and alien-like he looks. It is common knowledge in this alternate Universe that Vampires and humans do not have anything together, not friendship, not relationships, nothing, unless the human ends up dead afterwards, of course. This is how it should be! It’s much more realistic and much more endearing to read as a result.

I also love how vast the World that McKinley creates is. I imagine that McKinley could write many more stories from this World about all sorts of Others, like the Demons. There is a Demon in Sunshine and you do learn some interesting things, but I get the impression that there is much more to them. Sunshine seems to touch only the tip of the iceberg. In fact, McKinley has mentioned that she is writing a book set in that World, tentatively called, Albion.

I will admit that there is a bit too much padding in between the main plot points, most of which includes Sunshine baking and her new recipes. The obsession with food does get a little tiresome at points. There’s also a whole sub-plot about the SOF (Special Other Forces) that, to me, is rather boring and a little pointless. I skimmed over these chapters. In general, Sunshine also thinks a little too much, which slows down the pace of the action. I think that the events that do happen far out way these negatives, and I literally couldn’t put this book down (okay that might be because I skimmed a few chapters). If you prefer action packed books that are non-stop from start to finish, you might not like this book.

The ending of the book (which I won’t disclose) was disappointing for me at first. It ended so abruptly and it didn’t tie up all the loose ends. After taking some time to digest how it ended, I now think it is perfect. McKinley writes just enough to end the book, and leaves the rest up to the reader’s imagination. You are free to take the story anywhere you like, for as long as you like. I enjoy these kinds of books, where the author doesn’t spoon feed you. After all, isn’t the reason we read to imagine?

One final note, I was surprised, after meeting McKinley and getting the impression that she was quite reserved, by the course language in the book. It fits Sunshine’s character to a tea, but it was so unexpected and a stark contrast to McKinley’s writing style in Beauty. Just thought I’d give you a heads up.

Huh! Also, an interesting little fact I just noticed as I was looking for information about the Demon, there are no chapters in Sunshine. Just three parts and each new bit started after a blank line.

Final Verdict: You might want to start reading this book at the weekend, so you have time to blow everything off and find out what happens.