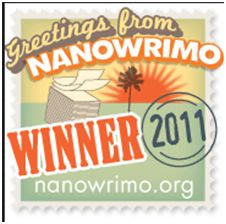 For many years, I had heard friends talk about this strange thing called NaNo WriMo that they attempted in November. None of them had ever finished or won, and so I had not really paid it any mind but to say, “That sounds cool to do one day.” Last year I realized that I was hearing about it again, and this time I wanted to attempt it. This time I had a harebrained idea for a book that I really did want to get out of my head and onto paper. So I tricked two of my good friends into helping me. And I have to say that I would not have finished if I was on my own.

I must have done something correct in that I was able to finish and win in my first year. While I think there are better ways to do NaNo, I think some of the things I learned are helpful to pass on. The first, as I said, was having my friends. The first was Frances, and we competed. We are both competitive people, and wanted to win not only for the glory, but we bet a chai on this. We would sit together and write, sometimes with chai, sometimes with pizza, late after work when everyone else had gone. But we fought to have just one more word than the other. I had the distinct advantage of being a night writer while Frances wrote more in the morning. This meant I knew the number I had to beat while I was writing.

My second friend was back home in the USA. She was one of the ones that I knew had attempted it before and never finished. We have never competed, as she is not a competitive person. Instead, we were more support for each other. After our day writing (which with a 5 hour time difference was a bit unfair in my eyes) we would send the words to the other for them to read. It was super helpful to have someone saying they enjoyed your writing and asking what was going to happen next. There is a pride when someone genuinely likes your work. Plus, I had a great story waiting in my e-mail every morning. My competitive side was trigged in that this friend got a great start, and was ahead for most of the month, until she went to a conference. Then I used the advantage of being in an earlier time zone and beat her to finishing my 50,000 words.

The fact that I have been dreaming of this story for over a year really helped me. Slowly over time, I imagined many scenes and refined them until they were exactly as I wanted them. Also, before the month began, I had started to fill these scenes into a rough outline of what I wanted to happen. This was invaluable for me, in that it helped me know where I was going, and where to leave clues and such. But it meant that I did not have to rely so much on being inspired all the time while writing. And it was really nice being able to cross off scenes as I wrote them.

While I am predominantly a night writer, and prefer staying up until the early hours of the morning to finish, there were times when this was not possible. There were a couple days where I was away all day, and my laptop was too large to take (especially to a concert). In these times, I sometimes carried a small notebook to write. But more often, I would sit on the train and write an e-mail to myself with the next section of my story. These were nice because then even though I was not able to hit my word count all at once, I was not completely behind, and in this one month every little bit counts. I don’t know whether this would work for everyone. I am lucky (Frances would say strange) in that I am able to stop in the middle of a sentence, go do something else, and then return and pick right back up where I stopped. This meant that I usually knew where I was when I left so I could start writing on my phone exactly where I left off. But when in doubt, I usually mailed my story to myself so I could attempt to glance back just a couple paragraphs to ground myself.

I think something I would have liked to change was to have more writing time away from the internet. I find that I am very easily distracted, and the internet is a huge distraction. When writing for school, my trick was to go sit somewhere that I could not get wireless internet so that I would not be tempted. I have not found a comfortable spot that I would be able to do this, but if I attempt NaNo again, this is something I would like to have.

My general feeling after finishing my month was elation. I knew so many other people that had not been able to finish. But more than that, I had 50,000 words of a story that I want to share with people. Since then I have written only about 20,000 words. Looking back I see what an advantage NaNo was in that it forced me to write. I learned a lot about how I write, and what works for me. There were times when I was tempted to give up, to stop, especially when I fell behind by a day or two. It was really hard to get back after those. But I think the responsibility to my story and to my friends helped so much.

The icing on the cake for me was after NaNo, when I shared the 50,000 words with Frances while on one of our trips. It was amazing to watch as she read my words, and laughed or quickly went ahead to see what would happen. I had written so fast in that month, that sometimes she would tease me about what I had written and I no longer had any memory of writing it. But that train ride was the moment I knew I had not wasted a month of my life.

So while Frances likes to tease me that I have not let her forget that I won, I like to think it was all in the right spirit of things. With another year of NaNo approaching, I am weighing the pros and cons of participating. I would love to try again and start a tradition. But I know it was a huge time commitment for me, and this year I need to focus on my school work. But I am tempted to do a 25,000 NaNo. Either way I recommend that it is something everyone should try at least once.

Final Verdict: While this is not for everyone, if you are curious you should grab a friend and try it in November! 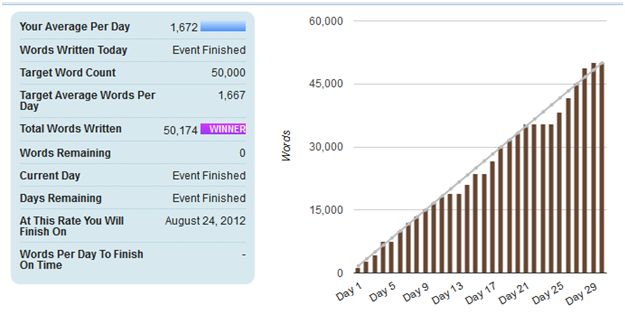 2 thoughts on “Surviving NaNoWriMo: Memoirs of a First Time Participant”