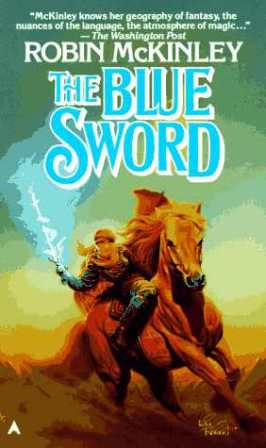 “[Harry] had always suffered from a vague restlessness, a longing for adventure that she told herself severely was the result of reading too many novels when she was a small child.”
The Blue Sword by Robin McKinley

The story follows a tall, blonde woman named Harry Crewe (her given name is long, rather hard to say, and she hates it, so it is just Harry!). Her father has just recently died, and with her mother already being dead, she must journey to a colonial town in the desert outpost where her brother is serving time in the military. She is taken in by an older officer and his wife who treat her as a daughter. The natives of the land are broken into tribes, but the main leader is a man named Corlath. The military outpost is thrown into an agitated state when the elusive Corlath announces he is to visit. There are rumors about him and his people being able to use a form of magic, and call down lightening. The meeting between the two groups does not go well, but Harry meets Corlath’s eyes and something strange passes between them. Corlath, who does indeed have a form of magic, is compelled (for reasons he does not understand) to steal Harry from her bed a few nights later and takes her with him into the dessert. Harry awakes in a strange travelling camp, no idea why she is there, and no way to communicate with anyone besides Corlath. She and Corlath try to figure out why she is with them, and what purpose she is to serve. And with the threat of a demonic army invading from the North, how long does Harry have to spend in the land she has come to love?

When it comes to comparing The Blue Sword and The Hero and the Crown, for me The Blue Sword wins by the smallest of margins. I find Harry is a little easier to relate to than Aerin, as Harry is dealing more with the issue of not knowing what she wants or where she fits in. But both books shave such great, strong female characters, who are still feminine despite wearing armor.

Harry is such an interesting character and a good role model. She is thrown into some really tough situations, such as having lost both her parents, being slightly estranged from her brother, having to move somewhere where she doesn’t know anyone, and then being kidnapped for no clear reason. Yet she weathers this because she is “stiff with honor.” It is not that the problems do not affect her, or that she does not feel the emotions, but that she cannot allow the emotions to show and make her appear weak. She does indeed cry right after she is kidnapped, but it is not until she is alone in the dark at night. She faces her problems, ones that were beyond her control, and makes the best of the situation. But most of all she is a character who knows her own mind. When she thinks something is not right, she will act, even if it may cost her everything. She stands by her principles and the people she cares for.

One of the other things that really helps make the book so interesting is Corlath. He is a strong character, who is making the best decisions he can for his people. He has been the leader of a divided country from a young age, and carries the responsibility for his people on his shoulders like a tangible weight. He is just as confused as Harry as to why he has stolen her away from her people. He tries his hardest to make Harry feel welcome, even as he harbors some resentment that this foreigner seems to hold the fate of his people in her hands. There are glimpses of the man behind the title, and these are some of my favorite scenes, especially when he gives Harry her new horse.

The background characters are also interesting. I love that so many of the older men in the story seem to adopt Harry as a daughter or grand-daughter. She finds herself being called, “Daughter of the Riders” when they take her as one of their own. While she may have been an outsider at first in both the colonial outpost and amongst Corlath’s people, both learn to accept her as one of their own.

If I had to recommend one book to a younger girl, this would be that book. There is action and adventure, and a bit of romance. But there are also characters you can relate to, and cheer for. Harry is the sort of character that girls should look up to!

Final Verdict: Drop everything and run and grab a copy of this. A great story of a woman finding her own strength and saving a country she fell in love with!