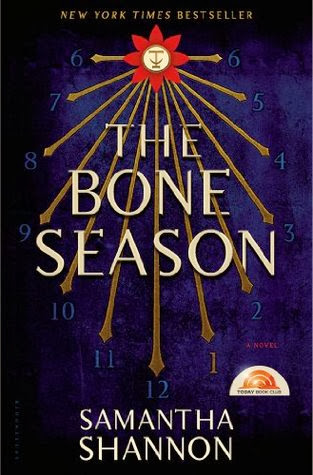 “Not all of us know what we are. Some of us die without ever knowing. Some of us know, and never get caught. But we’re out there. Trust me”
The Bone Season by Samantha Shannon

The Bone Season is set in London in 2059. The world is very different to our own. Scion, a security force, controls London and other major cities across the world. They hunt down Clairvoyants who are considered to be “unnaturals”, and send them to the tower. Although no one knows what happens in the tower, the clairvoyants who are sent there are never seen again.  Paige Mahoney is part of a crime syndicate known as the Seven Seals in cohort I-5 in London. She is a dreamwalker (a rare kind of Clairvoyant) whose spirit can leave her physical body and enter other Clairvoyants’ minds. She uses her ability to break into people’s mind’s to gather information. After an unfortunate incident on the Underground, Paige is captured by Scion and sent to a prison for Clairvoyants in Oxford.  This is no ordinary prison, however. The prison is controlled by the Rephaim, an otherworldly race, who train Clairvoyants to fight the Emin (deadly creatures who feed on human flesh). Will Paige be able to escape the prison? She’ll have to fight past the bone grubbers (Clairvoyants that have been brainwashed and serve in the Rephaim army) and the Rephaim (who are immune to man made weapons and posses rare Clairvoyant abilities).  Oh, and the only way out is through a meadow filled with mines and the Emin who crave the taste of human flesh.

I like the idea behind the world that Shannon created in The Bone Season. Having the dystopian society be Clairvoyant is a little bit different (albeit there are other books that have also done this – Shadow and Bone by Leigh Bargudo, for example). However, the fundamental flaw with the world building in The Bone Season is the sheer amount of information. I found the first few chapters downright frustrating to read. Paige describes the world around her in a LOT of detail. Yet these lengthy descriptions are pretty useless because there is a lot of jargon and old slang which isn’t explained. For example, she’s a voyant, in particular a dreamwalker. She’s also a Mollisher who commits mime-crime. Does that immediately make sense to you? No. It takes time to learn what all of these terms mean unless you jump to the glossary of terms at the back of the book every five seconds. There’s also a lot of pointless information that’s never part of the plot and isn’t explained. For example, Floxy is flavoured oxygen. Why people take flavoured oxygen is beyond me. Then there’s the name dropping of all kinds of clairvoyants without an explanation as to what that clairvoyant can do. I‘d just finally started to grasp the idea of the world when Paige is taken to a voyant prison in Oxford that is controlled by the Rephaim. Everything starts all over again with more lengthy descriptions and jargon to learn and remember. The lengthy descriptions of Oxford and the people amazed me because I could read a long description and come out the other end without a clear picture. That made it difficult to imagine what everything looked like. For example, I wasn’t sure what the Rephaim look like (i.e., whether they resembled humans or something else), and I really don’t have a clue what the Emin look like. I have an image of something shadowy with sharp teeth. That’s all.

**Once I’d wrapped my head around the world though, I found it fascinating. I just wish that I hadn’t  had to wade through so much information to learn about the world**

I liked Paige. She had a really feisty personality and despite being out numbered and less powerful than the Rephaim, she refused to accept her new inferior status. Although the Rephaim’s rules meant Paige should only speak when invited to speak and she is not supposed to look directly at the Rephaim, she does anyway. There were moments where I admired that quality in Paige because it meant that she didn’t sit around and mope for half the book before deciding to fight. She started fighting right from the get go. Paige’s refusal to submit caused problems for other Clairvoyants whose masters were not as rational as Paige’s though. Although, I liked that her character was flawed because it made her seem more real, but I had hoped that she might learn and grow as a character. For example, obeying rules that would lead others to be punished, but she didn’t. Her Clairvoyant ability was fascinating to read. I enjoyed the scenes where she practice her ability. These scenes could easily have been lost in translation because the author is describing something that only exists inside her head. For example, the Shannon describes the idea of a dreamscape well. She explains how Paige’s dreamscape is like a field of poppies and that Paige leaves her dreamscape by stepping off the edge of the field. I thought the imagery was well done. She also describes how dreamscapes are split into five zones: sunlight, twilight, midnight, lower midnight, and hadal. I was disappointed that these weren’t described in more detail. From memory, all that the reader really learns is that the inner zone (hadal) contains the spirit and the outer zones contain memories. I do wish that Paige had been more useful in the end though. She’s supposed to be this rare and powerful Clairvoyant, and yet, after one failed attempt, she’s running for the exit. I felt the ending could have showcased Paige’s abilities to a greater extent.

I didn’t really warm to Paige’s master, called Warden. I wasn’t sure of his age, to be honest. I went back and looked at the description which implies he’s looks about Paige’s age, but he acts so much older. This might be because he’s actually two hundred years old. On the one hand, that makes for a realistic character. When I read books where two hundred year old vampires act like 16 year olds, I get annoyed. However, Shannon could have done more to help the reader get to know Warden a little. He was so secretive about his motives and what he is up to (e.g., the times he is wounded are never explained) and he never really talks about himself. He doesn’t seem like a real person.

**There is a spoiler in the paragraph below. This does not relate to the ending of the book, but is still a significant plot point. Skim past this if you do not wish to read the spoiler**

That’s why the romance that occurs between Paige and the Warden is so out of the blue. Paige spends three quarters of the book reminding the reader that she detests the Warden. I can understand why considering how cold and secretive he was. So where did her feelings come from? And, why did the Warden like Paige? I didn’t see anything that she could have done to make him like her because she reacted against everything that he did and said. Most importantly, where was the build up of chemistry? I simply wasn’t invested in the romance because it came out of nowhere! I did, however, find the gold cord that linked Paige and the Warden together interesting. I just wish there was more about the ramifications of that in the book. I think that it’s clear Shannon spent too much time describing less important things than what could have made the story more captivating.

Aside from Paige and the Warden there were a lot of characters in this book, many of which weren’t in more than one or two scenes. For example, in the mime-crime syndicate that Paige belonged to, there were 7 members (hence why they are called the Seven Seals). Most of these characters blurred together, however. I only remember Jaxon Hall and Nicklas Nygard in any amount of detail. The others don’t really have distinct personalities or distinct events that are linked to them. It’s the same with the Clairvoyants and the Rephaim that Paige meets in the voyant prison. Some of these characters stand out a little more, but the majority are just names. It didn’t help that some of the characters were entirely unnecessary. For example, one of the Bone Grubbers gave Paige some vital information and then faded into nothing. I feel that Shannon could have stream lined the characters and given the remaining characters chance to shine. That would have allowed the reader to build a connection with the other characters so that when bad things happen, the reader feels something. I just didn’t care that much about any of the characters, not Paige’s fellow mime-crime members nor the friends she made in the voyant prison.

One of the main issues with this book is a pacing problem. The book could have been a real page turner if there hadn’t been so many flashbacks. Many of the chapters started with flashbacks to Paige’s time in the crime syndicate. These flashbacks didn’t help enhance the story and they weren’t very interesting. Each flashback was about a specific member or two of the mime-crime syndicate that Paige worked with. Although they built up a picture of Paige’s life before coming to the voyant prison, they were just unnecessary fluff. I found myself skimming those flashbacks. As I neared the end of the book, I found out that there was a reason why Paige kept dreaming about the past, but that reason wasn’t really necessary to the plot, at least to that extent anyway. One of two would have been enough. Only one of the flashbacks revealed anything interesting about Paige, and that was more uncomfortable to read than anything else. I think Shannon would have been better off bringing the Emin into the story more. They were meant to be a great danger to the Clairvoyants and yet they didn’t feel that dangerous. There’s only really one chapter where the Emin are involved, and while that was interesting, it left me wanting more. The problem is that more never came.

I will be reading the next book in the series. Although, I’m not sure what there is to fill seven books. I felt the end of the book wrapped things up nicely. However, now that the ground work for the world building and the background on all the characters is out of the way, maybe the next book will be more action-focused. Fingers crossed.

Final Verdict: The book is an interesting and overall enjoyable read, once you learn to push past all of the lengthy descriptive passages, numerous and fairly pointless flashbacks, and the jargon.