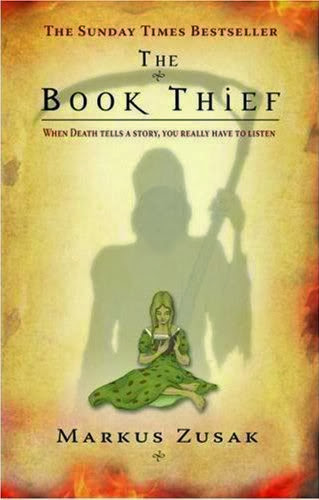 “As is often the case with humans, when I read about them in the book thief’s words, I pitied them, though not as much as I felt for the ones I scooped up from various camps in that time. The Germans in basements were pitiable, surely, but at least they had a chance. That basement was not a washroom. They were not sent there for a shower. For those people, life was still achievable. ”
Death from The Book Thief by Markus Zusak

I can’t even remember the first time someone mentioned The Book Thief, but I remember thinking every time it was mentioned that I should read it. However, it was not until I heard that the movie was coming out that I rushed to get a copy of the novel from my local library. Without looking anymore about the plot I started reading.

The story is narrated by Death, and he tells the story of Liesel Meminger which he learned from a book that she wrote. The story starts just before she arrives at her new foster parents’ house, after her younger brother died on the train ride there. As World War II is starting, in a poor section of town outside of Munich, Germany, Liesel starts to settle in and makes friends. After waking from a nightmare, Papa starts helping her learn to read, starting with a book she stole at her brother’s funeral. Learning to read is a struggle for both of them, but she slowly makes progress. However, the compulsion is too much and she steals her next book. While she is worried about the consequences of her theft, her Papa hides Max, a jew, in their basement, because he is the son of a man that saved Papa’s life in World War I. Max and Liesel start to bond over words, but can the family survive in Nazi Germany? And what is the true power of words? And of course, Liesel has a few more thefts up her sleeves.

The first thing I have to say is that I almost stopped this book after 100 pages. I really was not liking it, and especially with Death as the narrator. Luckily, I pushed through and things picked up, and the ending was super emotional. However, I still do not like parts of it, and honestly I don’t think I will ever read this book again, although this is also because of how sad the book is.

So while having Death as a narrator sounds cool in theory, it is one of the most annoying parts of the story. Death spoils most things that happen in the book, either by revealing ahead of time what happens or through the list of words and events at the start of the chapter. Death acknowledges this and says he hates building mysteries as they bore him. While mysteries might bore him, I like having a little bit of suspense and not knowing everything that happens before it does. He also flashes forward and tells us important things before they happen, such as exactly when important people are going to die. This was completely aggravating, and it also dragged out the sad scenes so when bad things happened they seemed to happen multiple times. However, Death does have some great quotes, and provides some of the most poetic and thought provoking moments of the book. My favorite is when Death is talking about war, he says, “I’ve seen so many young men over the years who think they’re running at other young men. They are not. They’re running at me.”

Part of the reason that the book is a little slow at the beginning is that it takes a while to get to know Liesel. At the beginning she is very young, scared, and completely illiterate. This was very hard for me to connect with. However, she gets much more interesting as the book goes on and she discovers the power of books. Thankfully, as Liesel becomes more comfortable with herself she also gets strong. She stands up to the neighborhood kids, teachers and kids at school who make fun of her for being illiterate, and she uses words to keep people calm during air raids. By the end she is a very strong character, and I really liked her.

The best character in the book though has to be her foster father. He was one of the most interesting and caring people. I think part of it was that he reminded me so much of my dad. He is the one to get Liesel to open up, and he sits with her every time she has a nightmare. Even though reading is difficult for him, he teaches Liesel and works many, many hours for her. More than just for his family, he is a very caring man, but not a completely foolish one, as he has learned how to stay safe during the Nazi occupation. Without Papa, Liesel would not have progressed to be such a strong character.

The other characters were interesting and the relationships between them and Liesel were the driving force behind the story. There is the neighbor boy, Rudy, who just wants a kiss from Liesel, but is also her best friend. While he would like the kiss, he never thinks Liesel is any less than him, and the two of them cause a lot of mischief. Mama is interesting as she can come across as tough and rude, but underneath she has a very large heart and really loves Liesel. Then there is the Mayor’s wife, a woman who has become barely a shell of a person since her son died. Liesel is able to connect with her, and in this relationship we can see how much Liesel has grown up by the end of the book. They give us one of the best quotes about writing, “…but there would be punishment and pain, and there would be happiness, too. That was writing.”

My favorite relationship was the slow friendship between Max and Liesel. Max is the son of the Jewish solider that saved Papa’s life in World War I. Max ends up living with the family, and it is Papa who first encourages Max and Liesel to talk. They share the power of words and dreams. The scenes with the two of them were probably some of my favorites, and these scenes really brought out the human aspect of the story.

Having visited Auschwitz (we only drove past Birkenau), having lost Jewish family in the Holocaust, and having spent a lot of time at the Holocaust Museum in Washington D.C., this book really hit my heart. It also made me realize that I never really considered how hard the war was for those in Germany who did not whole-heartedly support the Nazi regime. War is unfortunately very difficult for civilians, and this book really shows that. As I mentioned before, Death has some great quotes about all of this.

However, there was a lot that I just didn’t like. Not only was Death ruining things, it was also unevenly paced, with the beginning being really slow. My other big complaint is the end. I will discuss this more in the link below, but let’s just say that some big things happen and then the book just ends. Also as a warning, as with most books with war as a major component there are going to be very sad parts to the story! I think the thing about this book that leaves me the most disgruntled though is that parts of it feel like it was written to get onto the popular booklists, like Oprah’s list or the New York Times Bestseller, rather than just telling a poignant story. Some of the prosaic bits from Death feel deep without actually adding anything to the story and just leave me resenting them (especially as many of them ruin future plot points).

Final Verdict: If you can push through the first 100 pages, it is an eye opening look at World War II, and how books and words can change someone’s life, and impact relationships. However, there are going to be some really sad parts!

For more information about how I feel about the ending click here. Obviously, there will be spoilers, so don’t click unless you want to know about the end of the novel.