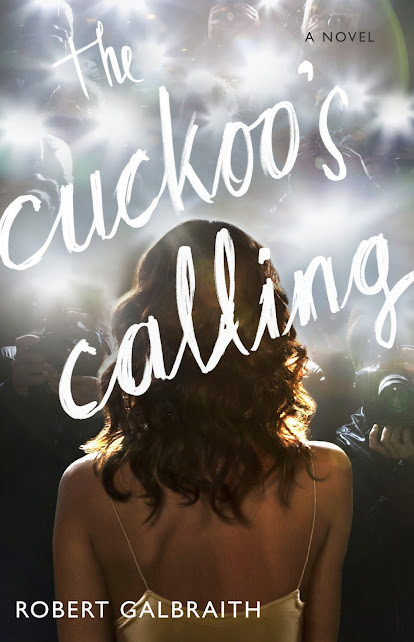 “He found Robin’s company satisfactory and restful, not only because she was hanging off his every word, and had not troubled to break his silences, but because that little sapphire ring on her third finger was like a neat full stop: this far, and no further. It suited him perfectly. He was free to show off, in a very mild way, which was one of the few pleasures remaining to him.”
The Cuckoo’s Calling and Robert Galbraith

As soon as I heard that JK Rowling had secretly released another book after The Casual Vacancy, I borrowed the book from my library. Honestly, when I heard that Rowling had published a crime-mystery novel under a pseudonym my first thought was “about time.” I know when I first heard about The Casual Vacancy there was a lot of speculation about Rowling wanting to write a crime novel, and honestly that was what I had wanted from her. As I sat down to read The Cuckoo’s Calling, all I could do was hope that the book lived up to my very high expectations for it!

The story starts with the apparent suicide of model Lula Landry on a cold winter’s night. Three months later her older brother, John Bristow, believes Lula was murdered and hires Cormoran Strike. Strike is an ex-army investigator, who lost half of one of his legs, and actually knew John and Lula’s brother when he was a boy. Now Strike, and his temporary secretary, Robin, must find out if there is anything to John’s belief in murder, and if it was murder, who killed Lula?

Honestly, I don’t think my summary gives an adequate summarization of this story. I loved the story, and this is the book I wanted The Casual Vacancy to be! While the last 100 pages of The Casual Vacancy where really great, the rest of the book dragged. The Cuckoo’s Calling did take a couple chapters to really get me, but from then until the end, I had trouble putting the book down, except to take breaks and just marvel at how much I was enjoying the story. I didn’t want it to end!

It is hard to say what my favorite part of the story was because there was so much that I loved. I think I have to start though with Strike. The book only really started to grab my attention when we met Strike, and at first it isn’t a great meeting. Instead he is introduced when he almost knocks Robin down the stairs and saves her by grabbing her and pulling her back to safety, unfortunately he grabbed her left breast (honestly that is what happens!). Then slowly he is introduced to us, and it is perfect because it is a slow reveal. It is a way in to the book before you realize he uses a prosthetic leg, or that he is only 35 (he looks older, and honestly I thought he was closer to 50 at first). However, as we get to see him start to investigate, the person he is develops; he has a troubled childhood, failed relationships, and he believes in justice. While he is smart and is good at his job, it is subtle and we don’t get to see what he is thinking or planning, so the ending is surprising. He also genuinely cares about Robin and is a good guy, which makes it all the more surprising that he doesn’t have any close friends. Strike is also very conscious that Robin is attractive, but also off-limits because of her engagement, and for once, a male character respects that boundary! Strike is very aware of who he is, one of my favorite quotes is about him: “He had lost the army, and Charlotte and half a leg: he felt a need to become thoroughly accustomed to the man he had become, before he felt ready to expose himself to other people’s surprise and pity.”

Robin is a nice compliment to Strike. At first glimpse she has just been proposed to the night before and is setting off for a new temp job. I didn’t think I was going to like her at first. However, as soon as she realizes she will be working for a private investigator she gets really excited, and confesses in her mind to having wanted to work for one since she was a child. As someone who grew up reading mystery novels, I could totally understand this point. She proves to be not only good at her job, but also tenacious in following leads. She is a really good person, and treats Strike wonderfully, especially in a couple of awkward moments. She also fights to stay and work with Strike and by the end I really wished there had been just a little bit more of her in the novel.

They mystery itself was incredible. Usually I tend towards crime novels with more gruesome crimes, but this one is much more intriguing in its subtlety. You are never really sure if there was a murder or not. I like to think that I am rather good with mysteries and solve most of them before the end, or at least am fairly close to the answer. Honestly, this one kept me guessing until the end, and even then I really wasn’t on the right track. This was the great part about not seeing what Strike was thinking, and we never were privy to information that he wasn’t, so it really was intriguing to see what he had figured out.

As for the writing style it was very much Rowling’s style, which I really love. I cannot think of any other mystery novel that used as many words that I was unfamiliar with. I have a list of them at the end, to give you some idea. This never really detracts from the story though, so don’t be intimidated. Below is one of my favorite examples of her prose (not all the novel is like this, but this one really caught my attention):

“Sweating a little in his heavy overcoat, while a weak sun made the park shimmer in the distance, Strike asked himself whether the strange suspicion that had him in its grip was anything more than a shadow moving in the depths of a muddy pool: a trick of the light, and illusory effect of the wind-riffled surface. Had these minute flurries of black silt been flicked up by a slimy tail, or were they nothing but meaningless gust of algae-fed gas? Could there be something lurking, disguised, buried in the mud, which other nets had trawled in vain?”

However, there are some points that are a bit more vulgar, that I feel she threw in to try and pretend to be a retired male police officer writing the novel such as this gem: “…when her mouth puckered into hard little lines around the cigarette, it looked like a cat’s anus.”As with all her other novels there are a lot of characters, but unlike The Casual Vacancy, it is relatively easy to remember who everyone is. There are also some quotes from translations of Greek literature that really puts Rowling’s stamp on this work.

I have to admit, that I am already looking to buy this book and re-read it. I am also really looking forward to the next book in this series. I loved the characters of Strike and Robin and cannot wait to see what they do next!

Final Verdict: A wonderfully written mystery that will keep you guessing until the final pages. Another reason to love JK Rowling!