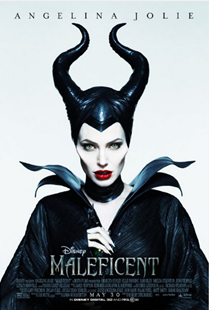 We wanted to just take a little bit of time to talk about some of the plot points at the end of the movie, that most would consider too much of a spoiler. There are also brief spoilers for Frozen and Snow White and the Huntsman. So if you so not want to see these, please skip this review.

Clearly the first thing we need to talk about is the twist on the traditional “True Love’s Kiss.” Rather than the traditional waking from a Prince’s kiss and then marrying him, it was Maleficent’s motherly love, and kiss on the forehead that awoke Aurora instead. We both loved this change; however, it was not completely unexpected with Lynne guessing it was coming as soon as Maleficent visited the baby Aurora when she is first in the cottage with the three pixies. Although the more familial love has been done several times recently in movies (e.g. Snow White and the Huntsman and Frozen), it was still a great touch.

When you look at some of the oldest written versions of Sleeping Beauty, the kiss wasn’t present. Instead, the Prince would rape Aurora, and it was her resultant children that wake her up. So “True Love’s Kiss” was an improvement on those stories. Additionally, the idea that true love is not something that happens in an instant is outdated, and nowadays love is seen as something that takes time to build up. Furthermore, in modern time, we now recognize women should have agency, and be able to choose who they are kissing. So it was nice to see the Prince Phillip in Maleficent question if he should be kissing a sleeping girl.

Without  a romantic kiss waking Aurora, there is no emphasis on a man being the one to save her. Instead the women save the day: Maleficent’s maternal love for Aurora breaks the curse, Aurora finds and releases Maleficent’s wings (after immediately forgiving her upon waking for the original curse), and then Maleficent’s magic and wings save them from King Stefan. It was interesting to note with all that destruction happening, Prince Phillip was nowhere to be seen.

Another topic we wanted to touch on was the death of King Stefan. We really appreciated the fact that Maleficent stopped herself from killing him, even though she had clearly wanted to. Usually you would expect Maleficent to try and then for Aurora to stop her. However, Maleficent knew to stop, and knew it would not make her happy to kill Stefan. Stephan clearly got what he deserved when he tried to attack her after that and then died from his resultant fall.

The last thing we wanted to touch on was that the ending, where Maleficent encourages/allows Aurora to be crowned the Queen of the Moors. This shows that she was never really after power. Instead she wanted revenge. Her ability to step away from the power that she had wielded for over 15 years is rather impressive, and one of the most telling signs that she has mostly returned to who she was before.