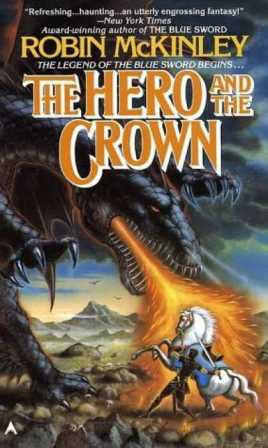 “She could not remember a time when she had not known the story; she had grown up knowing it.”
The Hero and the Crown by Robin McKinley

I saw this cover for many years, when I helped out in my father’s classroom. I was curious about the book, but I thought it looked like one of those old adventure books mostly for boys, and I was tired of reading books meant for boys. But one day I finally read the back cover, and found out that the figure on the front was a woman! I made it halfway through the book before I went to sleep that night. While it is the second book written, it actually happens many years before The Blue Sword. I fell in love with both books, but as I grew up I lost track of them and forgot about them. Then one day at university, I was wandering a book store and found a sale rack, and there on the rack were both books. I bought them, read them, and fell in love all over again. Now they travel with me as audio books, as they are two of the books I return to when I am feeling a bit down or out of sorts. I honestly think these two books would be some of the best presents to young readers, especially little girls.

The story is told slightly out of order, as the first part is a flashback to the main character, Aerin’s childhood until present. Aerin is the only child of the King of Damar, and his second wife, the ‘witch-woman.’ Aerin has never felt accepted by her father’s people because of her heritage, and has grown up hearing the story that her mother died in despair upon realizing she had born a girl. She is tormented by two of her cousins, Galanna and Perlith, but her only friend is her cousin and next in line for the throne, Tor. The royals of Damar have The Gift, and can do small magic, but Aerin has never shown a hint of having this ability. Galanna torments Aerin one day, and tricks her into eating a plant that is supposedly not deadly to the royals, and Aerin is lucky to survive and takes a long time to convalesce. During this time she befriends and learns to ride her father’s old crippled horse, Talat. She also discovers in a book about dragons, and through careful experimentation, a mixture to prevent burning from fire. She then gets Tor to teach her how to fight with a sword. Once she is all better, she rides out and fights a dragon; beasts that are more like large vermin (dog sized) and are below most knights. She earns her place in her father’s court and becomes known as Aerin Dragon-Killer, but when her father and Tor leave to fight Northern (Demon) mischief she is not permitted to ride with them. Just as her father is leaving, a report comes in that the great dragon, Maur, has awoken and is razing the countryside. He is said to be the size of a mountain, and his wings block out the sun. The King cannot spare any men or time, and says that the affected villagers can take shelter in the city. Aerin, however, returns with the messenger, and with only her sword, a spear, and her faithful horse she takes on the great dragon. But even if she survives she will not be accepted by her father’s people, and there is some force that has awoken the dragon. Can Aerin fight all of this? And should she lose so much for people who have never loved her?

It is really hard for me to be critical with this book or even figure out where to start talking, as I love so much about it. I think for me the overall story is brilliant. It reads a bit like an old fashioned adventure and knight story, but there are many new or different elements. I think the flaws to the characters are also very well done, they just make everyone seem so human and so relatable.

The best part of the whole book is Aerin herself. She is probably one of the best role models I have read about for girls. She is born into a difficult situation for her natural temperament, she is the King’s only child, and the youngest royal cousin, but she is also tainted by the rumors about her mother. She is at times insecure, shy, prone to some depression (not entirely unwarranted either), and has several long periods of convalescences, but she is stubborn and head strong, and pushes through these periods. She does not give up a fight when she is scared, overwhelmed, or in doubt of her people’s love for her (which is fickle at best), she pushes through to do what she believes is best, even at great costs to herself. She is just very human, and I think someone girls are able to identify with, as most people have felt out of place at least once. It also helps that she is described as no great beauty, but striking, as many girls can identify with this as well. There is also some unintentional humor in her, as during one of her most important battles, she is distracted by a growing rash on her chest, and while she knows she should focus, she just wants to scratch the itch!

It is clear then why some of the other main characters love her. Her most faithful friend is her horse Talat. Her first thoughts are often for him, and he fights for her often. They saved each other when Aerin first came to his isolated paddock. Also faithful to Aerin are her nursemaid and her father, but they are both adults throughout the book and have certain obligations that they must enforce on her. But their relationships with Aerin are comforting. I loved seeing Aerin realize that her father has always loved her, but was unsure how to interact with her (as he was not one for children’s games), and was too proud to seek her out.

The clearest love for Aerin is from her cousin Tor. He was her only friend growing up, and it was a friendship started when he slung her in a baby pouch over his back and went gallivanting off on his horse with her. But it is clear that he has always loved her, and he realizes first that he loves her in a romantic way. While it is a good match on paper, there are still a lot of uneasy feelings from when the King married Aerin’s mother, and the besotted Tor causes people to think that Aerin may have bewitched the future king. Aerin takes longer to discover how she feels about Tor and that is only after she meets Luthe.

There is a slight love triangle in the book, once Aerin meets Luthe. Luthe is a mage that lives secluded on his own mountain, and is the only one that might save Aerin’s life. But by saving her, he has changed her, and she must then deal with the repercussions of that. Her decision on how to handle the love triangle is one of the most unique I have ever read, and might not have worked except for the change that came over Aerin. I cannot say more without giving away too many spoilers.

The last thing I wanted to mention was that the dangers Aerin faces always feel massive. Her battles grow in size, and she must find out if she has grown enough to meet them. There is never a sense that she will easily survive, and in fact this may not actually be the case. Again, I feel this is rather realistic, and well done. Without such brilliant evils to face Aerin would not have become such an amazing hero, even if others do not acknowledge her as such.

Final Verdict: Run out and buy a copy now for yourself and any young girl you know. It has a brilliant role-model and shows that courage is not about not feeling fear, but overcoming your fear!

If you liked this story, continue to explore the kingdom of Damar in The Blue Sword. A story that is set many hundreds of years after this book, but Aerin still finds a way to make a guest appearance!