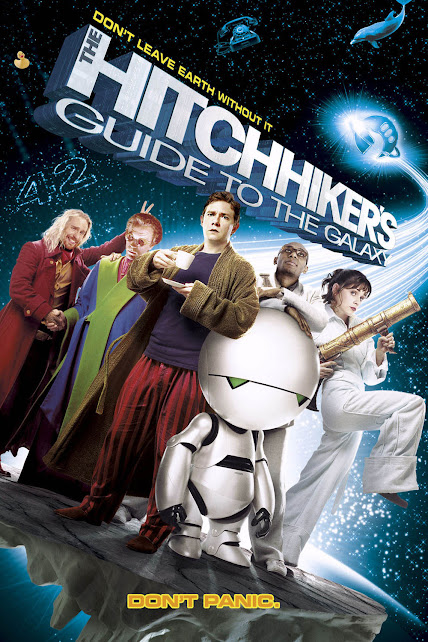 “In the beginning the universe was created. This made a lot of people angry and has widely been considered as a bad move.”
The Book from The Hitchhiker’s Guide to the Galaxy

For many years many of my friends have raved about The Hitchhiker’s Guide to the Galaxy book and radio plays. However, as is my habit, I tend to avoid things that other people rave about. However, most of my friends that liked the books hated the movie; I never saw it when it was in cinema. Then one day I decided to give the movie a shot, thinking I would probably end up turning it off half way. Instead I watched it all the way through and not too long after went and read the book.

The movie follows a very average Earthman (Englishman), Arthur Dent, and his unwanted adventure. Arthur starts the movie protesting having his house torn down for a bypass to be built, however his friend, Ford Prefect, helps him hitchhike onto a spaceship just as the Earth is destroyed for a galactic bypass. Ford is not a human, but instead a researcher for The Hitchhiker’s Guide to the Galaxy. After some trouble and hitching a second ride, Ford and Arthur end up on the most amazing ship in the galaxy, the Heart of Gold, with the man who stole it, the President of the Galaxy, Zaphod Beeblebrox. With Zaphod is another Earthling, Tricia, a girl that Arthur met at a party and was smitten by. Together this group sets out to find the actual meaning of life and everything, and Arthur just wants a decent cup of tea. You can watch the trailer below.

While I know a lot of people dislike this movie, I really enjoyed it, and have watched it many times now. It is funny, if a bit absurd, and just enjoyable to watch. Having read a couple of the books it is based on, there are bits that come from The Hitchhiker’s Guide to the Galaxy as well as The Restaurant at the End of the Universe. For me the feel of the movie is very similar to the books, as it really captures Douglas Adams’ interesting and at times absurd story. There are several obvious changes, mostly dealing with the ending. I prefer the ending of the movie, although that may just be because I saw the movie first.. Yet, I can see why it might bother some of the fans of the books, as there were some thematic changes as well.

One of the larger changes between the book and the movie is that the movie has a clearer love connection between Arthur and Tricia. In the book, they have not meet before the Heart of Gold. However, in the movie Arthur is still thinking about Tricia months after meeting her, and then has to try to figure out how to let her know while feeling completely adrift. I will admit that the pairing of Martin Freeman (Arthur Dent) and Zooey Deschanel (Tricia) is a bit of an odd couple, but if you suspend your disbelief it works.

As for actors, I really enjoyed Martin Freeman as Arthur Dent. He was believable, and a great everyman. However, I think the weakest link of the movie was Zooey Deschanel; it was not really enough to detract from the movie, but I feel like she always plays the same character in everything she is in. The other characters were amusing and worked for me. My favorite though had to be Alan Rickman’s voice for Marvin the robot, a clinically depressed robot.

I think the one big issue I have with the movie is the introduction of a weapon they need to obtain to repay someone. The gun allows for some realizations, but I found it a bit sexist. I can’t really explain too much about it, but it was not my favorite.

Final Verdict: An enjoyable film, that as long as you do not overly scrutinize provides a nice break.

One thought on “The Hitchhiker’s Guide to the Galaxy Movie”