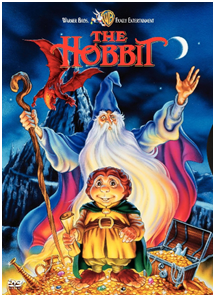 “I’m Mr. Bilbo Baggins, I’ve lost my dwarves, my wizard and my way.”
Bilbo in The Hobbit

My dad is a primary/elementary school teacher, and as such has a stash of old movies based on books, and during summers and vacations, my brother and I watched them. One of my favorites was The Hobbit. Even better my dad knows many strange songs, such as The Ballad of Bilbo Baggins, which sums up the same plot we knew from the story. I eventually forgot about the movie until Peter Jackson decided to make the original Lord of the Rings Trilogy (set in the same world as The Hobbit and involving some of the same characters). I immediately re-watched this movie and then started reading the books. However, the only book I enjoyed was The Hobbit. Now that Jackson is making The Hobbit novel and additional appendices into three movies, I have re-watched this childhood favorite. However, it was not until Hobbit Day (every September 22, Frodo and Bilbo’s birthdays) that I decided to write a review.

For those unfamiliar, the plot follows the adventure of a hobbit (short creatures, with large hairy feet, that love food and the comforts of home) named Bilbo Baggins. He is recruited to help 13 dwarves on their mission to reclaim their home and gold from a dragon named Smaug. They need a burglar to help sneak past the dragon, and a wizard named Gandalf selects Bilbo for this job. However, before they make it to the mountain, the whole troupe face many dangerous situations. You can see a clip below.

Overall, I think this version (1977) is much closer to the feel of the novel than the new The Hobbit: An Unexpected Journey. The original book is meant as a children’s book, and this is a children’s movie. First, it is only 90 minutes. Second, it cuts out some of the plot to streamline the story. Lastly, it follows the book and has the whole company flee from situations rather than fighting. In The Hobbit: An Unexpected Journey, the dwarves fight a lot.

One of my favorite parts of this movie are the songs. In the novel there are many songs; many of these are kept in this version and more songs are added. The whole soundtrack for the movie can be found on Youtube now, but my favorite one is below. I highly recommend checking out all of them. I think if my dad had found these songs when I was a kid, we would have listened to them on road trips!

There are some major differences between this version and The Hobbit: An Unexpected Journey (As the rest of this trilogy of movies is not out, I will only talk about those things in the first 1/3 of the story). The one thing that I really missed in the The Hobbit: An Unexpected Journey was the humor of the riddle scene; that is, the scene where Bilbo and Golum ask each other riddles. In this (1977) version, the riddle scene is hilarious, as Bilbo stumbles across one of the answers without realizing! The other main difference is the interpretation of the different races. In this version, hobbits, dwarves, the different types of elves, and men, are all very distinct from each other. The elves look less human than the Jackson versions. The goblins are also very different, and a bit more troll like. However, the difference for Gollum doesn’t really work in this movie, as he is supposed to have, at one time, looked similar to a hobbit, and instead he is much more animal-like.

Not everything is perfect though. There are parts missing from this movie that are in the novel, and things do move quickly. The thing parents should note is that the artwork may be a little scary to some children. I loved it, but I can see parts being scary to some children. The other part that bothers me is the very strong anti-war part of this movie. While in the novel, Bilbo does not like the battle at the end, this is really stressed in this version. Also, even though it is a children’s movie, more dwarves die in this version than in the book! Luckily, as we never really get to know them individually, you may miss this part!