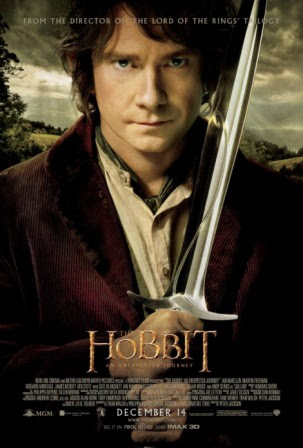 “Saruman believes it is only great power that can hold evil in check, but that is not what I have found. I found it is the small everyday deeds of ordinary folk that keep the darkness at bay… small acts of kindness and love. Why Bilbo Baggins? That’s because I am afraid and he gives me courage.”
Gandalf the Grey, The Hobbit: An Unexpected Journey

I will admit I am a huge fan of the Lord of the Rings Trilogy movies (the books I am just about to give another chance). So I followed news of The Hobbit movie very closely. I was interested when Guillermo Del Toro was signed on to direct The Hobbit, then worried when things seemed to drag on forever, super nervous when Del Toro stepped down, and then supremely comforted when Peter Jackson was brought on (or is that back on?). I watched all of the video diaries that Jackson posted. But then to my dismay, I realized that I would be flying home right when the movie was released, so I would not be able to attend the midnight showing. But when I was finally able to see it in the cinema, I was impressed. It was different from what I expected. I had grown up with the old Rankin and Bass animated version, and had read the book, and the movie is different. However, upon talking with my Middle Earth enthusiastic friends (and the internet), I was able to determine that Jackson had not completely invented things; instead he had used the huge background information that Tolkien had written, and it allowed him to place The Hobbit within the wider context.

I will try my best not to spoil anything, but it is a bit hard as the source material has been around so long, and this is only the first part of the story. The plot of The Hobbit follows Bilbo Baggins, a hobbit, and his adventures with twelve dwarves and a wizard. The Dwarves, led by Thorin, are attempting to return to their home and take back a mountain that was taken from them by the dragon Smaug. The wizard, Gandalf the Grey, is assisting them on their quest, and when the dwarves need someone to be a burglar (and bring their party to a more auspicious number), he suggest Bilbo. Before he knows really what is happening, Bilbo is setting off with the dwarves for the Lonely Mountain and the dwarves’ treasure. But along the way there is trouble, and the company must fend for itself and learn to trust each other. They face elves, orcs, trolls, and more evil beings than you can imagine. And for those familiar with The Lord of the Rings, the creature Gollum makes an amazing appearance, and sets in motion some of the events that lead to the latter trilogy!

And as is my tradition with these movies I saw it several times in cinema, with different people each time, and even watched it in 3d (I prefer 2d movies in general, and so saw it first in that format). There is so much packed into this movie that I was seeing new things every time I watched it. It was a bit overwhelming at times when I first saw it; especially the opening part where the back-story of the dwarves is told. I found some of those sequences a bit hard to follow as there was so much movement happening and the details in the picture never really got clearer. But after that the movie settles into a better rhythm.

As with the previous three movies, this movie is a work of art. There is so much detail in every little thing. And not only is everything pretty, but the backdrop of New Zealand again transports you into a whole new world. While there are plenty of new sites that are breathtaking, for me it was more powerful to see the areas I recognized from the original trilogy. Revisiting Hobbiton was like visiting the house of a friend you grew up with. Seeing Rivendell with Bilbo’s eyes was amazing, you are reminded why it takes people’s breath away to see it.

One of my fondest memories of the old Rankin and Bass version of The Hobbit and from reading the book was the songs. It was the one thing that I was afraid would be taken out, and seen as too old-fashioned to include. Going into the film I had already heard the Misty Mountain song so many times I could sing it myself. But hearing the That’s What Bilbo Baggins Hates really made the movie for me! I hope there is more singing in the later movies.

The score for this movie was just as good as the original trilogy, which is one of my favorites. I love to work to the soundtrack, and have been privileged to work to this soundtrack now as well! I love that Howard Shore has brought so many of the old themes back. I teased some friends that I could just listen to the score and tell them who would be on screen, as it was all the same themes. While some people might find this annoying, again for me it was comforting. Plus there are plenty of new parts, and the re-imagining of some of the old themes was so well done. There is one scene where Thorin (the leader of the group) is stepping up to a fight through some flames, and the music that plays in that moment makes the scene (which is my favorite part!).

It was nice to see so many of the original actors back in this movie. Some of them have aged well and it is hard to tell the time (Elijah Wood and Cate Blanchett) but some of them are looking a bit older (Christopher Lee and Ian McKellen), which is funny since this is supposed to happen before the trilogy.

The casting of the dwarves was superbably done. It was a bit jarring at first as they are not really how I pictured them, but they quickly grew on me. I was really lucky to have received The Hobbit: An Unexpected Journey Visual Companion by Jude Fisher as a secret Santa gift before the movie came out. It gave background information on all the dwarves, which was super helpful when I went to see the movie. It is a bit hard to keep track of all of them, and some stand out more than others. Thorin has an amazing presence and he tends to draw the eye whenever he is present. Fili and Kili, being the youngest and most attractive also stand out, and their resemblance to Thorin (their uncle) is clear. My other favorite was Bofur, who interacted quite a bit with Bilbo. I look forward to getting to know the rest of them more in the later movies!

Some of the plot had been changed a little, or the scenes adjusted. This was a bit hard on me at first, as this is the first time I have gone to a Tolkien based movie and known what was going to happen. But while things were adjusted (the troll scene I found had really been adjusted), none of them really bothered me. My father did have trouble with some of the changes to the overall tone. The Hobbit the novel is a children’s book, and so when trouble happens the company usually flees. However, in the movie it is set for young adults, and the company instead fights their way out. For me this was an improvement, but for parents who were hoping to share this with their children they may have to wait a couple of years (although it is not super violent or bloody).

I was a bit surprised where the movie was stopped, as I had figured it would end two scenes earlier. So now I am just a little worried about the pacing of the next two movies. But seeing how well this all was handled I am hopeful my worry will be proved silly. However, it is now 10 months until I find out one way or another. This is the part that I don’t miss from the first movies!

Final Verdict: If you love epic movies, run to the cinema now. Just don’t be disappointed that the next installment won’t be out for a year and the trilogy won’t finish even then!