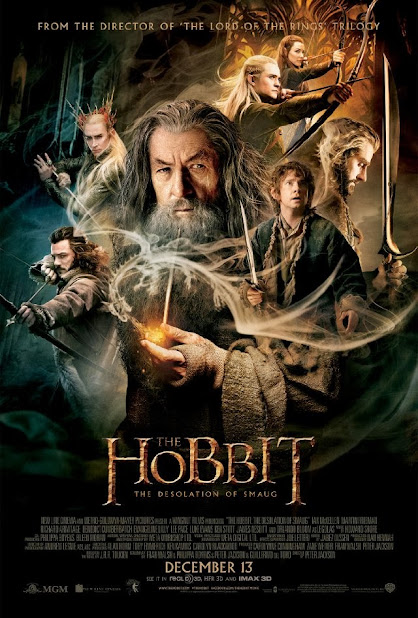 “Truly songs and tales fall utterly short of your enormity, O Smaug the Stupendous…”
Bilbo Baggins, The Hobbit: The Desolation of Smaug

I began counting down to the release of this movie as soon as I had seen The Hobbit: An Unexpected Journey, last year. In preparation, as I do with many movies that I am very excited to see, I tried to avoid seeing any trailers within the last two months (which is rather difficult, but immensely easier without a TV). While I briefly contemplated seeing a midnight premiere, as I would have had to go alone (and because I am a little less interested since the shooting at the Batman premiere), I decided to wait until the next day. Thankfully my friend and I arrived early, as it was packed, and as the lights finally dimmed I just tried to remember to keep an open mind.

I will give a brief overview of the plot, trying to keep spoilers to a minimum. The only spoilers included will be those that you would know from reading the original novel. I will have some hidden content that you can access at the bottom of the review where I will discuss things with spoilers for those of you who have already seen the movie.

The plot picks up where the The Hobbit: An Unexpected Journey ended. Bilbo, Gandalf, Thorin, and the other dwarves are now in the final stretch on their way to reclaim the Erebor (the mountain) and the dwarven city that lies within. Unfortunately, they are still being pursued by a pack of orcs, led by Azog the Defiler. As they reach the edge of the now dangerous Mirkwood forest, which had once been a peaceful forest, Gandalf suddenly leaves the company. As Bilbo and the dwarves face the perils of the forest and the elves that supposedly rule the forest, Gandalf has evils of his own to face. Gandalf, realizes that the events that are happening are not coincidence and starts to investigate who this necromancer really is, and takes on the evil on his own. Bilbo, Thorin, and the dwarves have many obstacles between them and their gold, the battle is less than half over if they make it to the mountain, as there is still a dragon, Smaug, to deal with. Will they make it to the mountain? Will Gandalf discover who the necromancer is, and will he be able to stop it?

If you would like to watch the trailer for this movie you can watch it below.

I have to say I loved the movie, even though as my friend and I agreed later, not a whole lot actually happens. This is really not all that surprising to me as I liked the Two Towers movie (the middle one) the best of the original three movies, as there was no need for a long introduction or ending explanation. However, the humor in this one really caught me off guard and there were several scenes where I had trouble stopping laughing.  That said, there is a real sense of danger and darkness starting to come through in this trilogy. There is plenty left for the last movie, so much so I am a bit worried at how everything will be handled, but I have a year to figure out how they are going to do that.

For the Tolkien purists out there, a word of warning, this movie is the furthest from the original text of any of the five Peter Jackson adaptations of Middle-Earth, but if you go with an open mind it works. There were certain elements that Jackson was able to explain that were a bit confusing in the original text (i.e. why when there are piles upon piles of gold did Thorin need a single burglar). However, even I found some of the changes hard to process, as my initial reaction was to just raise an eyebrow and say “That didn’t happen.” There were other Jackson additions to the plot that I really appreciated, but can see where others might not, and the main one is Tauriel the female elf (who I will talk about a little bit lower down and more in the hidden content). Also I appreciated a lot of the links to the Lord of the Rings trilogy, which make the six movies fit together better.

One of my biggest fears going into the movie was how realistic Smaug was going to look. From the last trailer I had seen several months previously, I had not been impressed. I wanted something that looked believable and a little terrifying, not something that you would see in a low budget made for TV CGI monstrosity. Another blogger was able to reassure me that I would not be disappointed with Smaug, and I have to agree, Jackson and Benedict Cumberbatch delivered on Smaug. Smaug is beautifully rendered, with each scale looking unique but still part of the whole. The dragon moved in a way that was part snake part lizard, but all predator. Then paired with Cumberbatch’s voice (which I think they may have added deeper tones to his already deep voice, but I have no idea how to check this), it really created a creature that you could believe caused the down fall of Thorin’s grandfather and dwarves.

If you have been following this blog for any amount of time you will know I am a fan of Cumberbatch, especially his voice. One of the things I was looking forward to in The Hobbit: The Desolation of Smaug was a double dose of his wonderful voice. Not only was Cumberbatch the voice and body capture for Smaug, he was also the voice of the necromancer. Again, this was a perfect choice, as paired with the black speech (or that is what I assume it was) the voice of the necromancer truly did sound evil and otherworldly. While Jackson tried to create some space between the two instances of Cumberbatch’s voice, they were still rather close together in the story and it detracted a little from the performances to have them so close sequentially.

One of the things that I missed while watching this movie as opposed to the previous one, was it almost felt like I was missing the dwarves. While they still have a lot of screen time, it is in group shots only, with only Thorin, Balin, and Kíli getting any significant screen time. I really missed Fíli and Bofur, as they had been two more of my favorites from the first movie. Honestly, some of the other dwarves could have been missing from some of the large scenes and I probably wouldn’t have noticed them missing. Hopefully, we get to see a bit more of them individually in the next movie.

While the dwarves seemed to be missing, the elves stepped up and really rocked it. I was not sure how I felt about Legolas (played by Orlando Bloom) being included in The Hobbit movies, but honestly it worked. Although he was significantly overshadowed by his father Thranduil (Lee Pace) and Tauriel (Evangeline Lilly). Thranduil is beautiful, and has a presence that makes it hard to see anything else when he is in the shot. The choreography for him was absolutely breathtaking, as he doesn’t even seem human; there is something completely otherworldly in almost every one of his motions. His interaction with Thorin was amazing, as it was such a contrast of characters and motions. However, I felt my eye mostly being drawn to Tauriel. Completely Jackson’s addition to the story, she never comes across as just being created to add a female to the movies. She is the captain of Thranduil’s guards and fights beautifully. I am very curious to see what she does next in the last Hobbit film.

One of my favorite fight scenes combined both the dwarves and the elves kicking butt as the dwarves escape in barrels. It was so much fun to watch, and honestly one of the funniest things I have seen. It also was great to see how different the two races fight. Dwarves work very well as teams, and seem to consciously be aware of the others in their party. The elves in contrast seem to fight as individual whirlwinds, who occasionally save each other; it is a much more solitary way of fighting.

Another thing that I missed in this movie were the songs. I was hoping to at least have an elvish party song while in Mirkwood. However, when the dwarves comment on a party happening, I honestly couldn’t hear anything. Maybe when I re-watch this I’ll hear something, but I was very disappointed, but not surprised to not have any songs in this movie. In general, I didn’t notice the soundtrack this time around, which is odd for me. The previous movie I could have had my eyes closed and told you who was on screen based on the music, but this time around I really couldn’t tell you anything about the music!

I feel I need to leave one last warning for people. If you have arachnophobia (such as Frances), there may be a 10 minute stretch that is hard for you to watch. Still go to the movie, but go with someone you trust who can tell you when it is safe to open your eyes again, as there are some really large spiders in the Mirkwood forest.

Final Verdict: A really great, epic movie, even though not too much actually happens. It leaves you wishing it was next year already so you can see how the story ends!