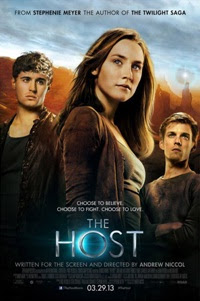 I concluded my book review of The Host by saying “I am excited to see the movie adaptation of this book. The trailers seem to show that the movie has capitalised on the action that happens in the book, which should make for an excellent movie. The book is very big considering what happens, so I guess in 90 minutes, only the best bits will make it in. I’m looking forward to the movie’s release on 11th April 2013.”

The Host Movie is set in the future, sometime after an alien race called Souls have taken over Earth. The Souls are not the typical aliens found in horror movies (i.e., little green men). The Souls are a gentle race of people who have taken over Earth because of the violent and aggressive nature of humans. The Souls believe that humans cannot be left to their own devices any longer, and The Souls like to take over a plant so they can experience it for themselves. The Souls experience Earth by living inside a human host and taking over their mind. This erases the person who used to inhabit the body, or so it was thought. The movie tells Wanderer’s story, a Soul who is put inside Melanie Stryder, one of the few remaining human rebels. Wanderer’s mission is to access Melanie’s memories and locate the remaining rebels. Melanie refuses to be erased and remains present throughout the movie (via a voice over). Melanie shows Wanderer images of the man she loves, Jared, and of her younger brother, Jamie. The Seeker (a Soul who is in charge of hunting down the human rebels) decides that Wanderer is not able to get the information from Melanie, and pushes to be placed inside Melanie herself to obtain the information. Wanderer flees to protect Melanie, and Melanie tricks Wanderer into the desert in pursuit of Jared and Jamie. How will the human rebels respond to Wanderer/Melanie, and will the Seeker track Wanderer down in the end?

Here is the movie trailer (don’t be deceived by how action-packed the trailer seems):

I have to admit that I was totally disappointed with this movie. On the whole, the movie lacked action and violence. There wasn’t that much action in The Host book, and surprisingly, there was even less action in the movie. In addition, the action that was included was greatly toned down. For example, the scene in the book where Kyle confronts Wanderer is fairly bloody. In the movie, the same scene is tame with a few blows here and there; an utterly lame attempt on Wanderer’s life. It was clear that the movie was toned down so that the movie could be a 12A (PG-13 in the USA). As Meyer’s work tends to appeal to a younger audience, it makes sense that they would aim for a 12A, but the movie fell flat as a result. There wasn’t enough action when they didn’t include these bloody and violent scenes from the book.

The Host is a fairly large book, larger than most of the Twilight books. Condensing such a large book into a 90 minute movie didn’t work very well. For example, Ian starts by strangling Wanderer because she is the ‘enemy’, and too quickly falls in love with her. This is just one example in the movie. All of the plot points were rushed, which was rather annoying for the viewer because it felt like the movie was skipping along. It also made the love interest less convincing. The last third of The Host book is the most interesting because the focus is more on how the humans can fight against the Souls and take back the planet. This was VERY rushed in the movie with hardly any time devoted to it. I thought there wasn’t enough time in the book even, but this plot point jumped along in the movie.

Besides the story line, I was also disappointed with the acting and the filming of the movie. In terms of the filming, the movie had a low-budget feel to it. Some of the scenes looked like they were filmed on sets. I don’t know for sure if that’s true, but it certainly seemed like that. In terms of the acting, it seemed that very few of the actors could act. I hate to say that, I really do, but I believed very few of them. Saoirse Ronan who played Wanderer and Melanie didn’t act terribly, but she also didn’t act well. There were numerous scenes where I didn’t find her acting convincing, or I found that she over-acted. I found that her over-acting was most obvious in the voice over. I know that it is difficult to play both roles, but there really wasn’t much distinction between the two characters either. In the book, the two characters are very distinct, which is how you can tell them apart when they are talking (both inside Wanderer/Melanie’s head). In the movie, however, Wanderer whispered aloud and Melanie spoke inside Wanderer’s head. This was a little strange because Wanderer shouldn’t need to speak aloud for Melanie to hear her. Obviously, this was done because otherwise things could have gotten really confusing in the movie. I do wonder whether this was done because there wasn’t much difference in how Saoirse acted each character though. Chandler Canterbury, who played Jamie, did very well in certain scenes. For example, in one emotional scene I was rather impressed. I had expected this to be cringe-worthy. However, there are later scenes where his acting is less impressive. I put this down to his age though, and considering how young he is I was fairly impressed. I wasn’t really impressed with Jake Abel, who played Ian, or Max Irons, who played Jared. I think they over-acted, much like Saoirse in many of the scenes. Max Irons was the most convincing actor throughout, and I think that he will be appearing in other movies, but I’m unsure about the other actors. I’m not sure how much of the poor acting was down to the script writing and directing. I can’t remember seeing any of the actors in other movies, so I will be interested to see how they act in other movies. The script had a definite Stefanie Meyer feel to it, so it might be that.

***Lynne has just pointed out that Saoirse Ronan was the main actress in The Lovely Bones and Hanna. Lynne’s actually had to show me the pictures because she said she played these parts and acted well. I have seen both these movies and was very impressed with her acting ability. I guess it has to be the direction and the script rather than Saoirse Ronan’s acting ability***

Final Verdict: Wait until the movie shows for free on the TV. That way, if you feel the same way I do, you won’t lose money paying to watch this movie. It has to be the worst movie I’ve seen in a long while and definitely worse than any of the Twilight Saga.