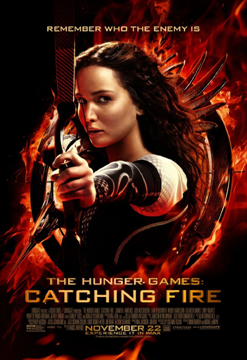 The Hunger Games: Catching Fire is the sequel to The Hunger Games movie released in 2012. Both movies are based on the bestselling dystopian trilogy written by Suzanne Collins. The Hunger Games: Catching Fire continues the story of Katniss Everdeen, picking up almost a year after she and fellow district twelve contestant, Peeta Mellark, ‘won’ (and I use that term loosely) the 74th Hunger Games. Katniss and Peeta are due to go on the Victory Tour where they visit each of the twelve districts before the next Reaping Day for the 75th Hunger Games. During the tour, it becomes apparent that their actions at the end of the Hunger Games have had serious repercussions. They catch glimpses of rioting across the districts and see graffiti that includes a mockingjay (like Katniss’ pin) and the words “the odds are NEVER in our favour”. Katniss and Peeta are put under a lot of pressure to act like they are in madly love in order to explain why they chose to die rather than kill each other at the end of the 74th Hunger Games. If they don’t act convincingly who knows what President Snow will do to exact revenge on Katniss and Peeta. Plus, they have an extra special 75th Hunger Games planned, which will see some familiar faces return once more!

You can see the trailer for the movie below:

I was really impressed by Jennifer Lawrence, who plays Katniss Everdeen, in The Hunger Games movie, and Lawrence did not disappoint in The Hunger Games: Catching Fire movie. In The Hunger Games movie, Lawrence captured Katniss’ steely, poker-face-type exterior, but allowed brief moments of vulnerability to seep out. In The Hunger Games: Catching Fire movie, Lawrence had a lot of really emotional scenes to act. Lawrence’s performance was outstanding in the majority of these scenes. For example, the scene where Katniss talks about District 11’s tributes, Rue and Thresh, is heart-breaking. Lawrence acted her part really well, and the consequences of her speech are shocking. This is one of the most memorably moments throughout the entire movie, for me. There were one or two scenes, however, where things were a little over-the-top. For example, in one scene, Katniss and Peeta are sliding into a healing pool. They both cry out in kind of pain/pleasure as they are healed. I felt this was over-acted, and it started to sound like they were having sex rather than healing. Awkward!

One thing that did bother me though was how polished Katniss looked before going on the Victory Tour. I know that because Katniss and Peeta won the 74th Hunger Games, they receive supplies for themselves and their district, but would those supplies include make-up and hair dye? It just bothered me that Katniss’ hair is so much darker in The Hunger Games: Catching Fire movie compared to The Hunger Games movie, and not just darker, it looks dyed. Plus, she seems to wear eye-liner and much fancier clothes. I guess I expected the tributes winnings to be more basic things, like food and money. Maybe I was wrong.

Katniss in The Hunger Games movie 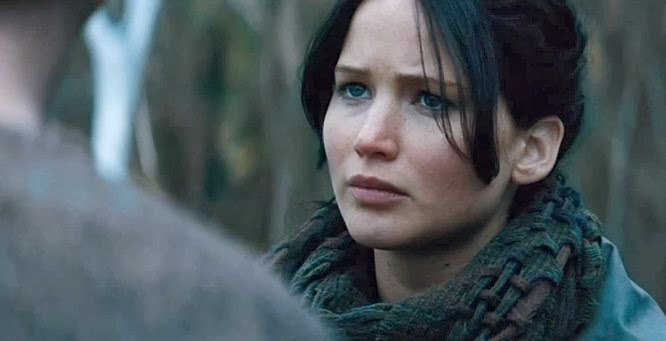 I am continually disappointed with Peeta. There are a number of reasons for this. First, the actor chosen to play Peeta just doesn’t fit the description of Peeta in the books. He’s a baker’s son and he’s supposed to be incredibly strong. Yet, because Josh Hutcherson is rather short, he doesn’t convey strength very well. His appearance has consequences for the relationship between Peeta and Katniss too, bringing us to reason two. When you put Hutcherson next to Lawrence, he looks younger because he’s so much smaller. Consequently, rather than a budding romance, I found the relationship to be more maternal at times. There were moments where I did feel the chemistry between Peeta and Katniss, but this was few and far between. Third, the other side to Peeta’s character is that he’s very intelligent. You catch glimpses of this (e.g., Peeta telling Ceaser that he’s in love with Katniss, or that Katniss is pregnant), but there’s not enough to build up any depth to his character. In the books, Peeta saves Katniss at times, and it’s partly his forward thinking that attracts Katniss. For example, he says, “Only keep wishing I could show the Capitol that they don’t own me. That I am more than just a piece in their game. If I am going to die I still want to be me” in The Hunger Games book). The trouble is that Peeta just doesn’t get enough air time in the movies, so it seems like he’s just a puppy dog, looking at Katniss with wide, vulnerable eyes, and she’s the amazing talented warrior who saves him. I don’t mind Katniss saving Peeta at all. I just wish that there was more time to show Peeta’s character in the movies.

As for the love triangle…where do I start? We know by the end of The Hunger Games book that Peeta has feelings for Katniss, and that these feelings are unrequited. In the Catching Fire book, the love triangle becomes more obvious. It becomes clear that Gale also has feelings for Katniss, but again, these feelings are unrequited. While Katniss does lean more towards Gale at this point, she doesn’t really think about love and children given the world that she lives in. In the movies, the love triangle was much more salient. Often, throughout The Hunger Games movie, the cameras would flash to Gale who would be looking miserable as Katniss pretended to love Peeta. In The Hunger Games: Catching Fire movie, more of the same happens, only Katniss seems to have feelings for both Gale and Peeta. I liked how the love triangle was a small sub-plot in the books. The focus was very much on survival and protecting family. Yet, while the love triangle remains a sub-plot in the movies, it’s a much larger sub-plot. This seems to happen much too often in Hollywood adaptations.

Some of the characters in The Hunger Games: Catching Fire really stood out, and others faded into the background. Johanna Mason, played by Jena Malone, was an interesting character. I found her sarcastic and bitchy personality entertaining. Before watching the movie, I was unsure about the actors cast to play Beetee (Jeffrey Wright), and Wiress (Amanda Plummer), but they were really good in the movie. Although neither received very much screen time, I thought that they both conveyed that quirky genius feel really well, particularly Beetee. Finally, Effie, played by Elizabeth Banks, surprised me. I liked her in The Hunger Games movie because she’s so ridiculous and a complete product of The Capitol. Yet, in The Hunger Games: Catching Fire, Effie still dresses ridiculously, but she seems more human. It’s a nice way to show how the people in The Capitol are also changing as a result of Katniss and Peeta’s actions at the end of the 74th Hunger Games and President Snow’s retaliation.

Sadly, there were more characters that disappointed me. I just didn’t warm up to Finnick, played by Sam Claflin. Claflin didn’t capture the strength or charm that Finnick has in the book. Plus, I’m not a huge fan of Claflin as an actor because he’s pretty forgettable. He appears in both Snow White and the Huntsman and Pirates of the Caribbean: On Stranger Tides, and yet, it always takes me a minute or two to remember which character he played. Then, there’s Haymitch, played by Woody Harrelson, and Cinna, played by Lenny Kravitz. They were two of my favourite characters in The Hunger Games movie. Yet, I was disappointed by both in The Hunger Games: Catching Fire. Neither received much air time, and what air time they did receive was underwhelming. Haymitch is supposed to be the one person who really gets Katniss, and that was kind of lost of the movie. Plus, his drinking problem was there, but only half-heartedly. Cinna, Cinna, Cinna. He was so bland in the movie. In the books, his character is so alive and he’s daring with Katniss’ dresses. You wouldn’t necessarily connect the Cinna in The Hunger Games: Catching Fire to the dresses he makes, put it that way. That severely affected the scene where Cinna is beaten by the Capital for turning Katniss’ dress into a Mockingjay bird. It was hard to feel Katniss’ pain because the audience hadn’t connected with Cinna earlier in the movie. Finally, once again, I felt that President Snow didn’t get enough air time. He’s meant to be the villain in this trilogy and he doesn’t pack as much punch in the movies as he does in the books. In the books, he’s creepy and makes me shiver. In the movies, it doesn’t translate as well. I don’t think it’s the actor because Donald Sutherland is perfect for playing President Snow. I think it’s a lack of air time, and mostly because President Snow doesn’t really do anything directly in The Hunger Games or Catching Fire books. His creepiness simply isn’t enough in the movies. I hope that he will come into his own in the Mockingjay Part One and Two movies. Oh! I forgot – Plutarch Heavensbee, who?

Final Verdict: I enjoyed the movie and I’d watch it again and again. The purpose of the movie, and the book itself, is to prepare the path for Mockingjay, however. Consequently, there’s a little too much setting up and not enough action.