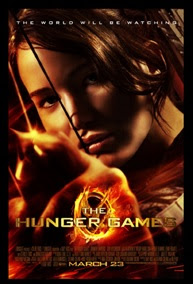 “I just keep wishing I could think of a way to show them that they don’t own me. If I’m gonna die, I wanna still be me. Does it make any sense?”
Peeta Mellark in The Hunger Games

After falling in love with The Hunger Games written by Suzanne Collins, I could not wait for the movie adaptation to be released. The movie was hotly anticipated and it felt like forever before the release date came around. Lynne made us matching Hunger Games t-shirts (see the bottom of the post for pictures), and with Mockingjay pins, we headed to Cineworld to watch the movie. I will admit that we did go during the day and just after the release date to avoid the cinema being packed with kids. I think it made for a much better viewing of the movie!

As movies go, the majority of characters in this movie were really well cast. Katniss, played by Jennifer Lawrence, was a great choice. I felt that she fit well with how I imagined Katniss would look. I also thought that Lawrence managed to convey Katniss’ tough-side through her determination, and her calm and controlled responses when under pressure. The problem is that this dominated Katniss’ character in the movie because the viewer is unable to hear what Katniss is thinking. I think this makes it clear to the viewer why some people find it difficult to like her. In places, Lawrence was able to show the softer side of Katniss; when she is with Prim, Cinna, and Rue, and when she is afraid (e.g., volunteering to take her sister’s place at the Reaping and just before entering the games). These moments were what made me root for Katniss in the movie. In the book though, the reader gets a greater insight into Katniss as a person because we are privy to her thoughts. So it is easier to understand why Katniss is the person she is, and that her tough-side is somewhat of a front. As a result, I rooted for Katniss more in the book than in the movie. My concern is that people who have not read the book might think Katniss is a fairly cold protagonist in the movie.

The only character who I didn’t think was particularly well cast is Peeta, played by Josh Hutcherson. His build just wasn’t big enough to fit with Peeta’s character. He is meant to be a big, strapping baker’s boy who attracts the Careers (the tributes who are trained to go to the games) attention because of his strength. This isn’t as believable in the movie because Hutcherson is fairly short at 5ft 51/2 inch. It’s not only his height though. He also doesn’t have a big enough build even though he does look muscly. I think this is most obvious when Peeta is in scenes with Katniss or the Careers. He also tends to looks younger as a result, despite being the same age as Katniss. I think that Alexander Ludwig, who played Cato, would have made a better Peeta. I found him more engaging to watch throughout the movie. I do think Hutcherson acts aspects of Peeta’s character really well though. His interviews with Ceaser are charming and natural. It would have been easy for an actor to over or under-act this. I also think the visual effects when he paints himself into the environment (e.g., making his arm look like bark) is amazing!

I was a little disappointed with the games themselves. While most of the main plots points in the book were also in the movie, something was lacking. I think it is the overall tone/emotion of the movie that is lacking. In the book, the desperation of the children through the whole of the games is clear; they are fighting for their lives. In the movie, this doesn’t resonate as clearly. I didn’t feel like Katniss or the other characters in the film were as desperate to live. In places, the desperation is there. For example, the first few scenes when the Hunger Games starts are really well filmed. The slowing of time in places and the dulling of the sound worked really well. It set the tone for the Hunger Games. I just wish this had continued throughout the games. There’s only one other place where the desperation is really clear and that’s near to the end where Katniss tries to get the medicine for Peeta and she is attacked by Clove from District 2. That scene made me gasp in surprise because it really is quite violent.

A key event in the movie is Rue’s death. I think there were elements of this scene that were well done and elements that were not very well done. I liked how they showed Katniss staying with Rue and placing flowers all around her despite the risk to Katniss. This showed how caring Katniss is. I thought the arrangement of flowers around Rue was also well done and fit with what was described in the book. I also liked how they linked in the riots in District 11 once Katniss kisses two fingers and raising them towards the camera. The reader only learns of this in book two, Catching Fire, because the reader only knows what Katniss knows. I think it worked better here, but of course, only a movie can do a cut away like that. There were a few things in this scene that didn’t work well. I think the main problem was Lawrence’s crying. Most of it was well acted, but there were a few sobs that made me cringe. I think the aim was to show how upset Katniss is over Rue’s death and she does sob in the book, but it was awkward to watch and I laughed rather than felt upset.

There were a few things in the book that I felt were major plot points that should have been in the movie. For example, when the announcement is made that there can be two victors if they are from the same district, Katniss whispers Peeta’s name in the movie. In the book, she is unable to contain herself and shouts his name at the top of her lungs. This shows that Katniss is caring and that she does care for Peeta. I would have liked to see this in the movie. Then, when Katniss needs to go and fetch medicine for Peeta, she waits for him to fall asleep in the movie. In the book, Katniss is stronger than this and she actually drugs him with supplies that Haymitch sent. I thought this showed Katniss’ strength and what she was willing to do to keep Peeta alive. Considering the movie doesn’t have a voice over to show Katniss’ thoughts, which give a major insight into her character and helps you empathize with her, I think these key points should have been included. Without them, it is more difficult to see Katniss as anything but cold and calculating, especially because she is playing up the star-crossed lovers angle to get sponsors, without letting Peeta in on this, and his knowing his feelings are true.

I’d really like to take a minute to comment on the ending of the movie. I’ve placed this bit underneath the photos below, so if you haven’t seen the movie, do not scroll down past the pictures!

Final Verdict: A great movie adaptation overall. Fans of the book may be disappointed by aspects of the movie, but those who have not read the book should love it! 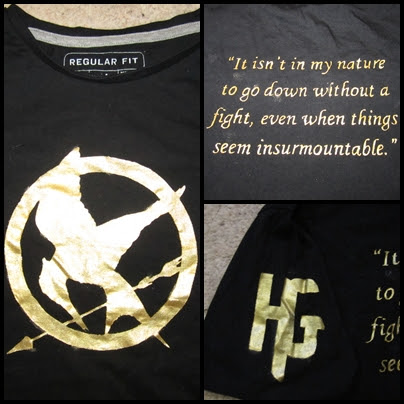 I didn’t like the ending of the movie and I didn’t feel that it was true to the book. In the book, Katniss is clear with Peeta that she was pretending to be in love with him to keep them both alive. This brutal honesty is true to Katniss’ character and it sets up the plot points at the beginning of the next book. I understand why the director may have chosen to hint at this rather than include it (i.e., Katniss said she’d rather forget the Hunger Games and Peeta said he doesn’t want to forget) because it is a slightly happier ending and it appeals to viewers who want the love triangle to be a major plot point. I guess this will be corrected in the next movie Catching Fire.