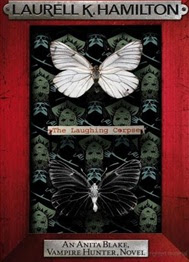 “Death didn’t bother me much. Strong Christian and all that. Method of death did. Being eaten alive. One of my top three ways not to go out.”
Anita Blake, The Laughing Corpse, Laurel K. Hamilton

The Laughing Corpse is the second book in the An Anita Black, Vampire Hunter, Novel series. I borrowed this book from the library as soon as I had finished the first book in the series, Guilty Pleasures. After waiting a week to visit the library I wasn’t overly eager to pick it up again, although I did want to read it. My pace quickened as I started to read though and I finished it within a few days.

The Laughing Corpse continues the story of Anita Blake. Some time has passed since the ending of the first book, Guilty Pleasures. From what I can tell, it’s not a huge amount of time, maybe a few weeks at most has passed. The book opens with Anita and her boss visiting a potential new client, Harold Gaynor. Harold Gaynor has an unusual request; for Anita to raise a zombie over two centuries old in return for over one million dollars. Anita refuses and leaves. Why? Because this would require a human sacrifice and Anita won’t commit murder. Harold Gaynor isn’t a man who hears “no” though and he sends his bodyguards to threaten Anita. She has to look over her shoulder for most of the book. It looks likely that the bodyguards will kill Anita if she doesn’t do what Harold Gaynor wants. To make things worse, Anita is trying to locate a Zombie with a violent streak. She visits a crime scene where only body parts remain. She visits a vundun priestess, named Dominga Salvador, who is very powerful. While questioning her, Anita offends the priestess by vowing to kill her to put a stop to her evil plan. She promises to send something slithering through Anita’s window that night. Dominga is true to her word. Will Anita be able to survive the monstrous things Dominga sends her way? Then there’s Jean Claude, the new Master Vampire of the city. He wants to give Anita the last two marks to make her his human servant. Anita would rather die, but Jean Claude has no choice if he is to reinforce his new position of power and appear strong to everyone else. Will Anita become Jean-Claude’s human servant or will she chose to die?

I really enjoy reading books with strong female characters. Anita is probably one of the strongest, although at times, I do think she acts a little stupidly as her mouth runs away with her. I admire Anita’s ability to carry on despite all the people who want her dead in this book. At one point, her friend, Manny, asks Anita why she isn’t more frightened after seeing Dominga? Anita shrugs and asks Manny what he would have her do, cry? Anita is frightened, but she manages to carry on and fight because she wants to live. I also enjoy Anita’s wit and sass. She has the audacity to tell the Master Vampire of the city to leave her alone, and later in the book, that she is leaving because she is fed up of waiting for him.

So far, I am really enjoying the series. The more I read, the darker the content seems to become. Several times I shuddered because of the monstrous things Dominga sent Anita’s way. I hate the thought of waking up to a monster in my bedroom at night and Hamilton really brings the reader into the story. I still shudder if I think about Dominga sending something my way during the night! Dominga herself is also terrifying. She has a presence throughout the book, yet Anita only meets with her three times. She is a significant character, but she isn’t in the book often. I admire Hamilton’s ability to develop a character with such depth. I imagine that Hamilton could write a whole spin off on Dominga, not that I think she’d be very relatable or likable. She’d be interesting though! On top of all this, the police scenes where Anita is investigating the zombie killer that leaves body parts scattered around different rooms is awful. The victims even include young children! I feel as sick as Anita does, and I am glad that Anita isn’t able to handle the situation very well, and the Police Officers don’t do any better. This gives the book a more realistic feel.

I thought the ending of the book was brilliant. I was surprised by Anita’s actions. She does what she has to. I don’t know if I could do it if I were in her position. We also learn something crucial about Anita. As the book progressed it was obvious that there was more to Anita than just an animator. Dominga’s interest in Anita’s power, plus Anita’s ability is much more advanced than all the other animators where she works, were all obvious indicators. I didn’t figure out exactly what this meant until the ending, and it was spectacular. I am keen to see how this develops in the coming books. I tried to get hold of the third book in the series, Circus of the Damned, straight away. It is out on loan at the library though! I will have to wait until after Christmas to get a hold of this book.

Final Verdict: The more I read of this series, the more I like it. It is the best Vampire series that I have read so far.

For other books in the series see Guilty Pleasures (Book 1), Circus of the Damned (Book 3), The Lunatic Cafe (Book 4)