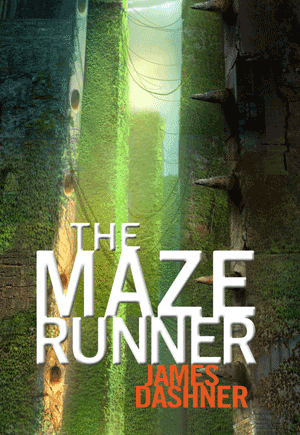 “Shouldn’t someone give a pep talk or something?” Minho asked, pulling Thomas’s attention away from Alby.
“Go ahead” Newt replied.
Minho nodded and faced the crowd. “Be careful,” he said dryly.
“Don’t die.”
“Great. We’re all bloody inspired.” Newt said.”
The Maze Runner by James Dashner

The Maze Runner is the first book in a dystopian trilogy written by James Dashner. The main character in the book, Thomas, wakes up in a metal lift that doesn’t seem to have a door. Thomas doesn’t have any memories of who he is or his life prior to waking up in the lift. He isn’t amnesic though because he knows what everything is. For example, he knows that his name is Thomas, just not his last name or who his parents are. He knows that he is in a lift, but he doesn’t remember how he learned what a lift is or who he was with when he learned it. When the lift comes to a stop, the roof opens, and Thomas is hauled out into a place known as The Glade. Fifty other teenage boys live in The Glade. They have developed a community where each boy has a job to do (e.g., Med-Jacks are the doctors). The Runners have the most important job, though. Each day they go into the giant maze that surrounds The Glade and try to solve the maze. The problem is that the maze is filled with Grievers (part slug, part machine, like creature) at night, and sometimes during the day. Things start to unravel once Thomas arrives. The Glade feels familiar to Thomas but he can’t unlock any of his memories. Some of the Gladers claim they have seen Thomas when they went through the Changing and that he is not to be trusted. The day after Thomas arrives in The Glade, a girl is sent to the Glade with an ominous message. Will the Gladers be able to solve the maze? Why has a girl been sent to The Glade after two years of only boys? Why is the maze familiar to Thomas and why do some of the Gladers recognise him?

I have mixed feelings about The Maze Runner. On the whole, I enjoyed reading the book and I will most likely read the next book the series, The Scorch Trials, but I wouldn’t say that I’m going to rush to start the next book. The overall idea of the maze was interesting and as I learned more about the maze itself I became more intrigued. I really wanted to know who was behind the beetle blades that have ‘wicked’ written on their backs and a camera that watches the Gladers’ every move. I was intrigued by the size of the maze (it takes one person an entire day to run one section of the maze and there are 8 sections) and why the walls move every night. Ultimately, I wanted to know the purpose of the maze. Why were the boys sent there and what the purpose of solving the maze was? Disappointingly, these two questions aren’t completely answered by the end of the book. I imagine that this will be the focus of The Scorch Trials. The reader does learn some information that paints half of the picture, but the rest remains a mystery.

There were a few key problems with The Maze Runner that kept me from connecting with the story. The first problem was that the Grievers weren’t enough of a threat. I thought the description of the Grievers was strange and unnerving.

“It looked like an experiment gone terribly wrong – something from a nightmare. Part animal, part machine, the Griever rolled and clicked along the stone pathway. Its body resembled a gigantic slug, sparsely covered in hair and glistening with slime, grotesquely pulsating in and out as it breathed. It had no distinguishable head or tail, but front to end it was at least six feet long, four feet thick”.

It is a little hard to formulate a mental picture because the Greivers are so strange. I found a nice drawing of the Grievers on deviantART by SummerFr0st that was similar to what I pictured. 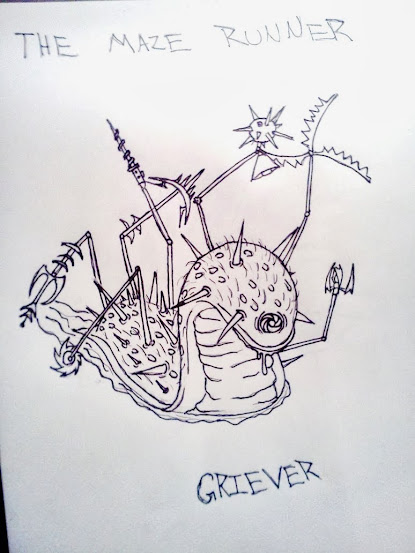 However, the Grievers aren’t in the story that much. They’re there in the background most of the time, but rarely in the fore front. There are two key scenes where the Grievers play a central role. In the first, the Grievers don’t hurt anyone, although they do chase them through the maze which was creepy to read. In the second, the Grievers do hurt one or more of the Gladers, but there’s no detailed descriptions of what happens. There just a few lines here or there that reference to the fact that a Griever had taken someone. Ultimately, this meant the tension in the book was lacking. Where was the risk that Thomas might actually die?

The second problem was that I didn’t connect emotionally with the characters. I think that Dashner perhaps did too much “telling” the reader rather than “showing” the reader what the characters were feeling. I think that at times it is appropriate to tell the reader what a character is feeling, but I think there was too much of ‘Thomas felt confused’ and ‘Thomas felt frustrated’. It meant that while I liked Thomas because he was really smart (e.g., his tactics to avoid the Grievers in the maze were really clever) and her was brave (e.g., putting his life at risk to save the other boys in the Glade), I didn’t feel Thomas’ emotions with him. I didn’t feel fear when Thomas was being chased by Grievers, for example. Asides from Thomas, I liked the other key characters – Minho, Newt, Alby, Chuck, and Teresa – but they never really blossomed. They all seemed rather one-dimensional. Alby and Newt were the leaders of the Glade and they blurred together at times. Minho was the leader of the runners, so he was smart and brave (most of the time). Teresa was smart and pretty, but I knew her the least of all the characters which made the romance between Teresa and Thomas forgettable. Chuck was the character that was most memorable because he brought a lot of humour to the book. Not connecting with the characters meant that I didn’t care about them to the point where I rooted for the romance or where I cried when something terrible happened.

The third problem was with how key information is revealed. At the beginning of the book, I became really frustrated with how the Gladers refused to answer any of Thomas’ questions. He wanted to know where he was, how he got there etc, and what some of the slang words mean (e.g., shuck) etc… The Gladers wouldn’t answer any of Thomas’ questions though. I just don’t understand why they wouldn’t answer his questions, particularly about the meaning of their slang words. They seemed to have no empathy for how Thomas felt and yet they went through the very same experience. There just didn’t seem to be a reason for withholding the information either. I assume that this was used to make the reader feel frustration along with Thomas, but I just felt annoyed. There are a lot of slang words and without any definitions it was irritating to try and figure out what the Gladers were saying. For example, “klunk” and “shuck” is used a lot. While Thomas is told the meaning of “klunk” eventually, Thomas never learns what “shuck” stands for. I think as the boys use “shuck” it’s fairly easy to guess at what the word might mean (i.e., what swear word rhymes with “shuck”). Once you find out what the key slang words mean though, some of uses of the slang create humour in the book. There were a few times where I laughed aloud purely because of how the slang had been used. I simply think that the meaning of the slang needed to come earlier in the book. Aside from the slang, I found it annoying that the Gladers refused to answer Thomas’ questions. He would often respond by wanting to “scream”. I wanted scream, not because I shared his frustration, but because Thomas’ reaction was also annoying. I wanted him to either stop asking questions or start making people talk.

After the half-way point, things became worse. Thomas learns a lot of information from Teresa while she is supposedly unconscious (you’ll have to read the book to find out how). It’s weird and seems to serve no other purpose than providing Thomas with information that then advances the plot. Most annoyingly, there’s no logical explanation. It just is. Eventually, when Thomas can’t learn anything else from Teresa, Thomas starts to conveniently remember things that advance the plot. This just became annoying. I wanted to see Thomas work with the Gladers to figure things out so that all the characters could grow. The boys were meant to be incredibly smart and yet it was always Thomas who advanced the plot. I think that’s why none of the other boys really shone in the story. They just didn’t really do anything.

On a more positive note, The Maze Runner is being adapted into a movie (due to be released Sept 2014). There’s no trailer for the movie yet, but some of the promo photos for the movie look good. My hope is that this will be one of the rare occasions where the movie is better than the book. See below a picture of the cast for The Maze Runner. For more images of who’s who from The Maze Runner see teaser-trailer.com 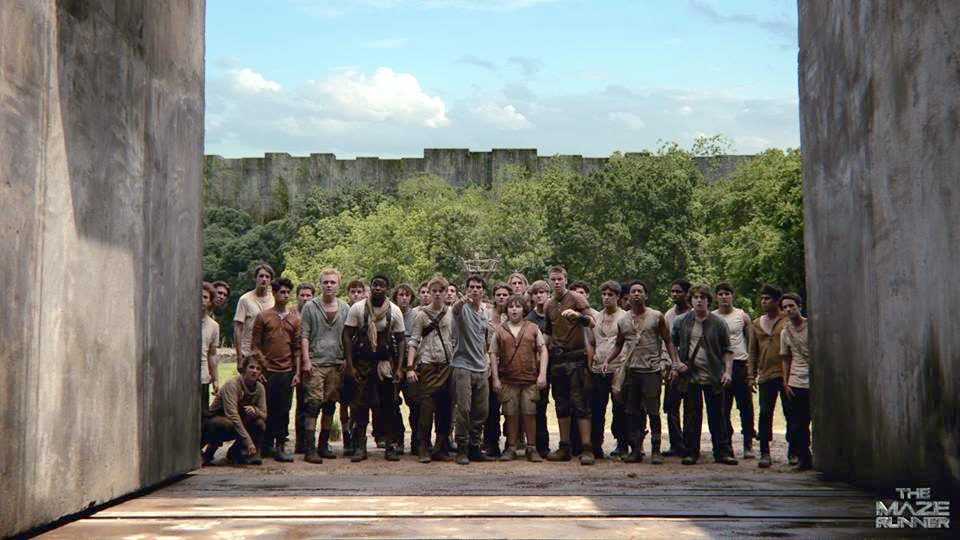 Final Verdict: An enjoyable read that’s plot-driven. If you like books that have strong characters that draw you in, this isn’t the book for you.