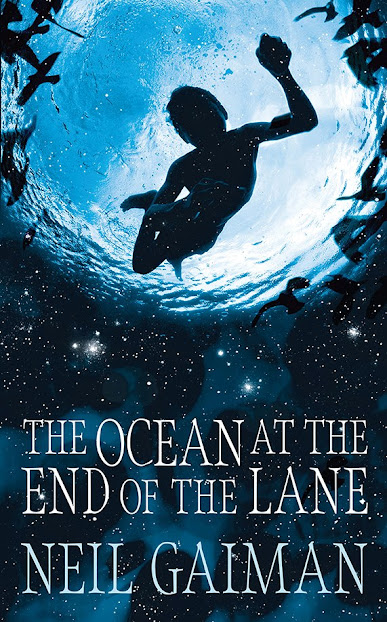 “Grown-ups don’t look like grown-ups on the inside either. Outside, they’re big and thoughtless and they always know what they’re doing. Inside, they look just like they always have. Like they did when they were your age. Truth is, there aren’t any grown-ups. Not one, in the whole wide world.”
Lettie Hempstock in The Ocean at the End of the Lane by Neil Gaiman

A random post on Facebook was the first notice I had that Neil Gaiman was releasing a new adult novel. Within a few days, Frances had gotten us tickets to see Gaiman live in Bath, talking about the book, and we would be able to buy the book before the book was available to purchase in the book stores. I didn’t even look what the book was about until it was in my hands! My first introduction to the plot was from Gaiman himself, and I could not wait to crack the new book open and dive in.

The story follows an unnamed man as he visits his childhood home after a funeral. He is reluctant to rejoin his family and instead takes this trip. While there, he begins a walk down the lane and visits a family he knew near the end of the lane, the Hempstocks; a grandmother, daughter and granddaughter. He remember a strange time around his 7th birthday when he and the granddaughter, Lettie, had had some adventures and visited Lettie’s duck pond, which she called The Ocean.

The book is shorter than I am used to and is hard to put down. I was a little unsure where it was going at the start, but it really picked up when it focused on the protagonist when he is 7. Gaiman always writes interesting children and that is certainly the case in this book. My only other issue is that I am still not sure how I feel at the end. I understand the story, but am left wanting just a little bit more, something to give me a better idea of what will happen after the book ends.

I was excited to read about the Hempstocks. One of my favorite characters in The Graveyard Book was a Liza Hempstock, and Gaiman said at the author event in Bath that she is related to the Hempstocks in this book. The three women are great, and a bit absurd. They exist outside of time and reality, and yet at the end you still aren’t sure what or who they actually are. I love how much they remind me of the triple goddesses of ancient religions. There is also a comfort in the three women, as when they are present things will be alright, and I loved that feeling. I would love a book about just the Hempstocks!

The main character is not really Gaiman as a child, but some of the events are similar to things that happened to Gaiman when he was young. The character was a quiet and bookish child, but braver than I expected. It was interesting to see so much of the world from his point of view. There are certain times where he sees something, but does not understand what has really happened, and I loved that juxtaposition. However, I was a little disappointed that we never see the older version of the protagonist reinterpreting these events now that he is an adult.

The one thing that I have noticed is a persistent theme in Gaiman’s books about parents. I do not know if this is on purpose, or not. In several of his books, the parents are very absent and uninvolved in their children’s lives. This may be a product of having children as protagonists, but to me this is a very strange way of parenting. As with previous books such as Coraline, the parents of the protagonist in this story are pretty oblivious at what is happening in their home. While Mrs. Hempstock (the middle aged mother of Lettie) knows everything, it is hard to see her as a real mother.

Overall, I enjoyed this book, and am looking forward to re-reading. However, I think Neverwhere or The Graveyard Book, were better stories for me. I look forward to Gaiman’s next book, and I hope we see more Hempstocks in the future!

Final Verdict: A good, quick read, but doesn’t quiet lives up to some of Gaiman’s other spectacular stories.