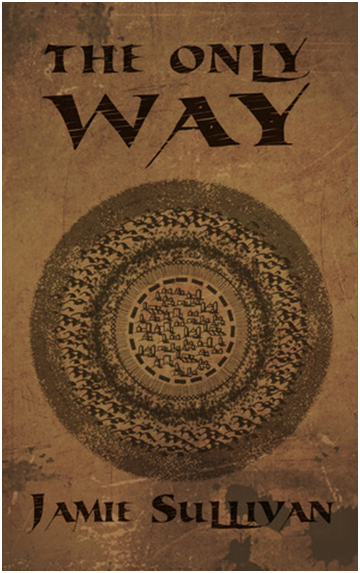 “People were cheering for you back there, every time you landed a punch on that guy. And do you know why? Because he was so much bigger than you. People love an underdog. Especially if that underdog can win.”
Leo from The Only Way by Jamie Sullivan

I love stories where the female character has to pretend to be a male to try and achieve something. Yet so often I am disappointed at the end, because she returns to being really girly when she falls in love. When I stumbled across The Only Way by Jamie Sullivan, the book description sounded too good to be true. Not only would the main character be passing as a man, she would have a female love interest. I was cautiously excited when I was granted access to an e-galley of the book.

The story is set in a world that is divided by wealth. Those on the lowest rung live in the Gutter, just above them is the Alley, and at the top of the world is the City. Hart and her family live in the Gutter and they struggle to make ends meet. Her father, Duncan, is a fighter, earning the family’s keep by winning in bare-knuckled fights sanctioned by those of wealth to supposedly keep criminality at bay. However, everything changes when there is a knock at their door letting them know her father did not survive his fight. With three younger siblings and her mother to support, there are not many options for Hart, not since the factories stopped hiring, and she refuses to sell her body as many other girls do. In desperation, Hart (with her mother’s help) cuts her hair, binds her breasts, and sets off to fight. Luckily, she catches the eye of Leo, an arena owner who wants to train up some fighters, and he has decided Hart is the one. Hart begins to train with Leo and his daughter Ruby. Ruby is tough and a good fighter, and slowly Hart learns enough to start winning. How long can this last before someone figures out she isn’t who they believe, especially as she and Ruby grow closer?

I have to say that I did not expect to like this book as much as I did, and honestly I loved it. I read it within a day, and I found it hard to put down. Even better for me was that it was relatively short, which I enjoy (rather than some long drawn out 400 page books where not a whole happens in). Even better was that some of my initial worries for the plot were not only carefully handled, they were excellently done!

The first thing that I absolutely loved was the very dark world that Sullivan was able to create. In her descriptions, I could honestly see the Gutter, and feel how awful it would be to live there. I am not usually one for scene descriptions or heavy world building, but the way that the description was sprinkled in worked for me. It never made me focus on it; instead it just enhanced my mental picture. The world creates the desperation that fuels Hart’s actions, and it brings to mind the same desperation that Katniss has in the Hunger Games books (but is not so present in the movies).

Probably the most compelling part of the story is Hart. Her motivation to do everything for her family while trying to still be herself is something that is easy to relate to. As an older sister myself, I understood her willingness to sacrifice parts of herself to make sure her siblings never had to face what she did. There is such a strong determination in her, and I think that is what all those around her respect about her. She is willing to get hurt and to work very hard to make sure her family is safe. Hart has so much focus on her family that she is still not sure who she is, and often forgets how other people see her. “It was ridiculous that she had felt more like herself when she was lying to everyone around her than she did now, covered in makeup and dressed in these ridiculous clothes.” This could have been aggravating to read, but it worked. Especially as Ruby was such a great foil to Hart.

I loved the relationship between Ruby and Hart. It was very slow and natural, but also refreshing. Ruby is, at first, a mystery to Hart, because she’s very different to Hart. I loved the first real description of Ruby: “This girl didn’t have that desperation about her. Instead, she looked at ease in her setting and her skin-it was something Hart had never felt and couldn’t relate to.” Their relationship really starts with their sparring, and the way Ruby pushes Hart to improve. They really start bonding when Hart treats Ruby as a person, versus how all the other guys treat her at the arena. Hart who has never had time to even think about what she feels, suddenly realizes that she and Ruby have been dating and that she likes Ruby. Obviously, they have to deal with the fact that Hart isn’t a man, and this part was handled well. I have to say, I was cheering for them the whole time!

Probably my other favorite aspect of this book is the fighting. I was afraid the fighting would be pushed aside for the romance and wouldn’t be very realistic. Thankfully, Sullivan handled the fighting really well. Honestly, the fighting and the struggle to survive is the main story, with the romance only there to add to the story (the way I like a story). The fighting is brutal, as bare-knuckled fighting is. It was a little more boxing based than I am used to (I know more about Martial Arts and MMA style fighting), but it worked. Even better for me is that Hart doesn’t win right away, in fact it is a struggle. I love where women fight in books, but often times it is very unrealistic. It is hard to match males between the muscle mass and size differences, but the training that Hart undergoes makes this work. Best of all, Hart still has to face uncertainty in her fighting after she starts winning, a nice change from other stories. So while I went into the story worried about the fighting, it was probably the most refreshing part of the story for me.

As far as things that I didn’t like, there were surprisingly few. Probably my only gripe is that the ending felt a bit rushed. It felt like things just worked out a little too easily, especially after a possible problem to their plans. However, it was a readable ending, and I am okay with it even if it just didn’t have the same weight the rest of the story had.

I really liked this story, and I know that I will re-read it again soon. It is one of the best lesbian novels I have read, even better I think it has appeal to anyone who is a fan of female characters!

Final Verdict: A fast and good read, with a tough girl dressed as a male who gets the girl at the end, and there is excellent fist fighting!

2 thoughts on “The Only Way”