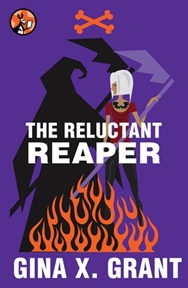 “Dead or alive or somewhere in between, I could still kick a guy in the brimstones. Dante dropped to the ground, clutching what was probably his crotch under that stupid Snuggie he’d no doubt bought from a late-night infomercial.”
Kirsty, The Reluctant Reaper by Gina X. Grant

Thanks to Netgalley, I was able to read The Reluctant Reaper as an advance reader copy. The Reluctant Reaper begins with Kirsty d’Arc diving in front of a reaper’s scythe to protect her boss, Conrad. Kirsty might not have been so quick to protect Conrad if she’d realised that he’d being trying (and failing) to exchange her soul for his own. Lucky for Conrad, Kirsty’s act of heroism gets him off the hook. Kirsty is taken to Hell, which doesn’t exactly fit with the traditional image of Hell. Once there, Kirsty goes about gathering evidence for an appeal against her old boss so that she can return to her comatose body lying in the Hospital. The problem is that Kirsty starts to like Hell and the people who are there, particularly Dante, the reaper who accidentally reaped her instead of Conrad. Will Kirsty stay in Hell? Or, is her drive for revenge to strong?

The world-building in The Reluctant Reaper was well done. I found it interesting that people in hell essentially wait in line for years and years to appeal against the decision to reap their soul. Most appeals fail and the people then have to earn points by working in order to be reincarnated. Although this is not the traditional idea of Hell (i.e., a pit of fire and an afterlife of torture), but waiting in line is really frustrating so I guess it’s a more modern idea of torture.

I also like how time worked differently in Hell. Time might move fast and a month may slip by in what seems like a day, or the days can drag on far longer than usual. Time also works differently for each person, for example, a month passed by in what seemed like a matter of hours for Kirsty, yet, the month went by slowly for Dante.

Finally, the demons were well done in the sense that they were different. One demon, for example, wore a tight sparkly gown, long nails, make-up, and jewels on his horns etc… He was different and I liked the demon for that. There were also people with the gift of Sight (past/present or future). I wanted more demons though, particularly evil demons. Although, Dante tells Kirsty that some demons will rip the flesh off her bones, there’s never any real threat that this will happen. I think this may have helped quicken the pace.

I didn’t really gel with the main character, Kirsty. It seemed like the author was trying to create a female character who likes shopping and designer clothes, but who will also stand up for herself. I like this idea in principal but this was clumsily done. Kirsty would complain about her lack of designer clothes too often, or wish for a stiletto to stab a demon-type-thing but comment that the stiletto wouldn’t go with her “Hell outfit”. In addition to this, Kirsty kept yelling at Dante one minute (or kicking him in the “brimstones” as in the quote above) and then sobbing uncontrollable the next. In theory, a female character that is fairly tough yet vulnerable should have created a more three-dimensional character. However, the switch back and forth happened too frequently and too closely together, meaning it read more like bi-polar disorder instead.

I also disliked how the author threw in so many puns and references to other books. At the back of the book there is a description of the author that says her sense of humour reads throughout the book. I agree that the puns she came up with are clever, but I found them very distracting and annoying. The puns did not endear me to Kirsty and I often groaned at them. I think a couple scattered throughout the book would have been fine, but there were so many that I might not read the next couple of books in the series as a result.

The chemistry in the book was lacking. Although it was painfully clear that Kirsty had a thing for Dante—because she repeatedly talked about how insanely hot he was—it wasn’t clear that Dante had a thing for Kirsty until two-thirds of the way through the book. As a result, the tension was lacking. Then, when Dante and Kirsty do get together, it seems like Dante is much more invested than Kirsty. Kirsty is still insistent on returning to her old life even though she didn’t really start living until she was reaped, with the aim of reuniting with Dante when she dies naturally. I think this was meant to be romantic because he’d wait for her. I didn’t understand why she wanted to go back if she was in love with Dante. It was clear that if she won her appeal, Dante would be in a huge amount of trouble. Plus, she is mostly responsible for her situation as she jumped in front of Dante’s scythe (and blamed him!), although she never acknowledges this properly.

The book ends rather suddenly. I didn’t realise the book was a series until that point. I was rather angry at the ending because it felt like nothing was really resolved. I’m guessing that the second book will be fairly similar to the first book as a result. There was nothing in the ending of the book that made me want to read more. Something needed to happen that ended the book on a cliff hanger. Although, technically the book does end on a cliff hanger, it’s a cliff hanger that indicates the next book will pretty much repeat the first book in the overall plot points. What the book needed was a cliff hanger that indicates the next book will be different and more exciting.

I think that this book probably needed to be combined with the next book in the series. That would have prevented the inevitable similarity between the books and the author could have spent more time developing the chemistry and tension between Kirsty and Dante. That way, I might actually have been invested in their relationship rather than feeling ambivalent. This would also have meant that some of the slower scenes, which didn’t seem to add to the storyline, could have been removed, or maybe they would make sense in the wider context of books 1 and 2 in The Reaper Series.